Bionic Commando on Game and Player 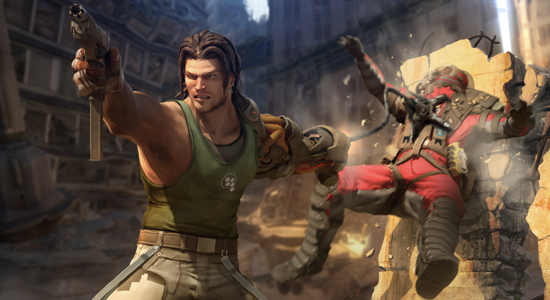 A new beginning and a potential false start.

Let me tell you about the man I met when I was still young." The words may be altered slightly, but Bionic Commando shares more than just an opening line with the original game, succeeding the NES classic as a sequel in both name and spirit. Overlooked amidst its many legacy franchises, Capcom's cult favorite returns twenty years later, moving its unique platforming action in to a new dimension, fitting for the times.

Drawing inspiration from Hideo Kojima's fresh start for Solid Snake, developer Grin makes some big changes to Nathan Spencer's world, and while alterations are necessary to modernize the antiquated imagery of the original, some of the stylistic revisions are jarring, and not entirely welcome. Incarcerated for 10 years after the formerly heroic bionic soldiers have taken a public fallen from grace, Spencer emerges as an embittered, foul-mouthed thug.

The iconic swing mechanics
have been translated perfectly.

Thankfully, the aspect that made Bionic Commando so famous in the first instance, the iconic swing mechanics, have translated perfectly through the dimension change — if players can fight their way through the games depressingly restrictive opening areas.

Initially it's a dizzying and confusing experience. Following several onscreen elements in unison makes orientation a difficult proposition, worsened by the inconsiderate design of the early progression through Ascension City. Platforms are never quite clear enough, and potential grapple points suffer from muddled perspectives. Further frustration arises from the many unjustified deaths that occur due to the fencing off of certain sections. An often indistinct barrier of irradiated areas will kill the player almost instantly, despite the locations being easily accessible and logical vantage points. The method of reducing the playable area is undeniably lazy, and a more creative, less punitive method should have been employed.

Almost without warning, persistence pays dividends. The level design opens up, and the spacing between grapple points feels more natural. Use of the bionic arm becomes a genuine pleasure, each swing a natural action, its almost instinctive to reach out for the next. When acrobatic movement is mixed with combat, it elevates the game above many others of its kind, adding a very real sense of originality and life; it's not a case of a carefully plotted learning curve, however, but a sink-or-swim situation that empowers those who can persevere.

In-game challenges promote flexible and inventive attack patterns, and offer substantial character upgrades upon completion, providing incentive to the repetitious dispatch of foes for players willing to adapt and invest. Death means that any progress made since the previous checkpoint is lost, and must be repeated, despite having already completed the task. The same goes for the many collectible tokens hidden around each area. It's initially a fun addition to the gameplay, but losing the items or several digits on a kill count is a disheartening experience.

Yet for all its glaring flaws, Bionic Commando still has some shining moments. In the more cohesively designed environments movement is a pure joy, and levels such as the port and garden areas are brilliant fun to play. The iconic theme music is adapted and reiterated often, ranging from the subtle to the bombastic. Moments of exhilarating swinging and explosive combat are heightened with the reinterpretation of the classic soundtrack, and evoke the feeling that this is a true sequel after all.

Low points are numerous,
and damaging, but there are
fleeting moments of brilliance.Its low points are numerous, and damaging, but those fleeting moments of brilliance should serve as a clear indicator that Bionic Commando deserves a place in modern gaming. Visually, it's disappointing, the familiar gloss and impact of in-house Capcom titles lost. The tone of the game is more serious and dark, and the moody, disaffected new Spencer is modernity not for the better. However, the fundamentals of Bionic Commando are represented well enough despite their momentary nature. Should another outing arise, the developers need to devote more time and resources in to producing a sequel without the development shortcuts they are guilty of here.

Grin's 2008 remake, Bionic Commando: Rearmed is polished to a level worthy of the name, and captures the essence of the original more succinctly, introducing a feeling of freshness and relevancy. While different from that take in both style and tone, this sequel has just enough flourishes to give a tingle of nostalgia, and for newcomers, when the music hits, when the swinging feels right, all wrapped up in the series' unique style, it's a tough sensation for any modern shooter to match. It's just a matter of clearing away the detritus first.