Wheelman on Game and Player 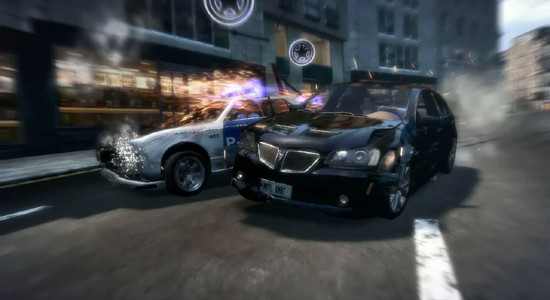 A serviceable romp for action fans.

aking everything it can carry from several recent console titles, Wheelman hurriedly patches Burnout and Grand Theft Auto together, adding several tons of Hollywood pyrotechnics and the visage of resurgent Hollywood action star, Vin Diesel. While this may sound a recipe for action-packed success, the game is clearly incomplete and not ready for market, an indelible truth marring a potential sleeper hit.

Employing an open world environment is now a base expectation of the genre, Wheelman taking place in a fairly realistic recreation of Barcelona. The city has good scale, and appropriate architecture, but many areas are often unpopulated, making a potentially vibrant arena feel inorganic and lifeless; certainly a missed opportunity. While offering convenience, the ability to warp directly to mission start points from the map screen prevents players from really experiencing the city, and its linear mission structure essentially reduces the game down to a series of themed courses. There is plenty to discover by way of side quests and hidden collectibles scattered across the city, but without the compulsion of a truly convincing world, free-roaming discovery means little.

Navigating the streets manually is still enjoyable, and the game really shines when behind the wheel, featuring some fun variations on standard vehicular combat combined with some entertaining physics-breaking maneuvers. Rather than sticking to the tried-and-tested method of vehicle procurement, players can leap several yards from one moving vehicle directly to another in an instant. Referred to as air-jacking, the mechanic is hilarious to witness, and fun to utilize, proving infinitely useful in the game's extended chase sequences where one car will not last the trip. The preposterous nature of air-jacking is echoed in other car-based attacks. Cyclone spins the vehicle 180 degrees on the spot, allowing players to take down several enemies in one move with some finely placed handgun rounds.

The basics of driving, and in particular, the vehicle combat is excellent, knockabout fun. Its adaptations on genre conventions make perfect sense, resulting in a title that provides solid entertainment value at its heart. Sadly, the development process has clearly been rushed, resulting in at best a passable release. The distinctly unpolished visuals appear to have missed a final texture pass, and the buggy nature of the enemy AI adds to the low budget feel of a game that's very nature demands glossy presentation and high production values.

The game completely collapses
once players are on foot.Fallen foes will inexplicably resurrect an instant after being thrown from a multi-vehicle explosion and police can apprehend Burik by simply walking in his general direction, an irritating side-effect of incomplete animation routines and tiresome rag doll movements. The game completely collapses once players are on foot, the robust combat of vehicle based gameplay replaced with unconvincing shootouts. Suddenly, the character becomes entirely underpowered and vulnerable once outside of a car, and the game takes a very last-gen turn for the worse, highlighting the limited attention paid to critical elements.

It's still a serviceable romp for action fans, featuring some undoubtedly cool gameplay moments, but whether its high points are enough to disguise the incomplete nature of the experience depends on the individual consumer. A budget title masquerading as a full price extravaganza, the game will lead players with high expectations to ultimate disappointment. Wheelman had the opportunity to make a genuine impact on a genre growing stale, and while it is by no means a complete failure, it never capitalizes on its potential, lacking identity beyond its clear influences, and throughout the adventure I was reminded just how much I would be rather playing those games, instead of this.