The Best Film-to-Game Adaptations on Game and Player 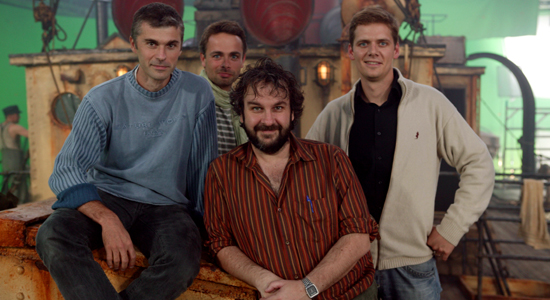 Let's honor games that didn't let every movie fan down.

ith the recent releases of The Chronicles of Riddick: Dark Athena and The Godfather II, I figured there would be no better time than now to honor some of the movie-licensed games that didn't let every fan of the film down. Sure, there have probably been more stinkers than winners in the realm of film-to-game adaptations, but there've been some gems along the way. Not every movie-licensed game is as bad as Reservoir Dogs. Now as I take you back in time, remember this is for console games only, so the Terminator 2 arcade game couldn't make the list, sorry.

Batman (NES, 1989): Anyone who knew the three-year-old Jeff knows I loved this film like no other. The best part was that I had this to sustain my interest while I waited for a VHS copy. The game. It was while listening to the great soundtrack, and beating thugs into invisibility, that I grew to become the Dark Knight fan that I am today. It wasn't from the comic books, but instead from the fact that I could take on Bruce's plight Superhero films adapt to video games with an ease no other genre has.to save Gotham with my own hands. This was probably the first film adaptation I've ever played, and is also probably the first side-scrolling beat-'em-up that I enjoyed, so it will always be considered a great NES game to me.

Darkman (NES, 1991): Superhero films adapt to video games with an ease no other genre has. Crime fighting is a cornerstone of gaming, and there's no shortage of action in superhero films, which is exactly why the transition is usually smooth. Darkman was like the Batman game, but mixed with a little bit of Mega Man flavor. Each level you would have to wear the disguise of the enemy, and use their moves en route to the final battle, with the character you were masquerading as. This was another side scrolling beat-'em-up, but the whole disguise element seemed like a fresh take. I rarely mention the film or the game, but I certainly enjoyed both.

True Lies (SNES, 1994): Arnold was in his own share of video games, but I've never enjoyed one more than True Lies. The top-down view had not been something I appreciated until this game came into my life. The gunfights were amazing, the weapon selection vast, and the level structure was clever. I loved the design of this game, and think it far surpasses its film counterpart in terms of quality. Games like Shadowrun (Genesis), Zombies Ate My Neighbors (SNES/Genesis), and Grand Theft Auto 1 and 2 (PC/PSX) would later make great use of this top-down view, but True Lies was the first game to turn me onto it, and for that I will forever be grateful. This was also one of the first games to let me wield a pump-action shotgun, which never gets old in the virtual world. This game was action-packed, and had great production values — more than I can say for most recent film adaptations.

Wielding a pump-action shotgun never gets old in the virtual world.Die Hard Trilogy (PSX, 1996): This game was three movies, and basically three separate games, rolled into one. The first film was my favorite to play through: an arcade shooter that featured John McClane running around a hotel barefoot, saving hostages. The second game was a lot like a light-gun game, but without the light-gun, and instead a cursor you moved with the controller. You'd shoot your way through an airport, and onto the runway, to try and stop the terrorists from escaping on the plane. The third game was a lot like driving in the first-person view of the Grand Theft Auto games, and you were basically trying to beat the clock while cruising the streets of New York at high speeds. I love all the variation that went into this game, and think only more, and longer, levels would have helped to improve it.

Goldeneye (N64, 1997): The best multiplayer console game at the time. Notice I didn't add the qualifier "film adaptation." This game was far and beyond a great game, and the fact that it had something to do with the James Bond films made them relevant again. This game is another case of better game than film, and sadly was the only James Bond game (there have been many) of such high quality. This game was to the console first-person shooter market what Halo has basically become now. It even featured dual-wielding (DD44s!) if I remember correctly. The single-player was great as well, but the real meat and potatoes was in the split screen action.

I like to see co-op in player-versus-CPU games.Spiderman (PS2, 2002): Another superhero film-to-game, but one I feel must be mentioned. The first Raimi-directed Spiderman film was a reawakening in the comic-adaptation genre, and this game did a lot of the same for superhero gaming. Spiderman wasn't as free-roam as its successors would be, but it did feature enough web slinging action to make you feel like you were controlling a great rendition of the titular character. The action was fast-paced, the boss fights less-than-tedious, and the overall level structure was streamlined. The atmosphere was certainly helped with dialogue from the actual actors from the film, which is something that goes a long way in recreating the atmosphere of the film. There have been at least five more Spiderman games released since this one, but none have been as enjoyable for me as this.

The Lord of the Rings: Return of the King (PS2, 2003): Of all the Lord of the Rings games, Return of the King is the one that stands out to me as the one that "got it." It featured multiple paths through the most important story arcs of the series, which was a bonus the previous games lacked, since they were all left to cliffhangers. There were great unlockables, as I could enjoy multiple playthroughs as many different characters. It also featured a co-op campaign, which I like to see in player-versus-CPU games. Another game with great dialogue integration, and the epic music from the films, which made you feel like you were at some of the most epic battles ever featured on the big screen. Like most the games on this list, there were more sequels to this game than there ever should have been.

Star Wars: Battlefront II (Xbox, 2005): This game was only slightly more entertaining in comparison to its predecessor, but lightsaber battles make enough of a difference in my eyes to set them apart. Though Jedi weren't the main focus of the game, the fact that they allowed you to have a map full of them was enough for my friends and I. This is a game whose campaign is basically the exact same thing as the multiplayer, which, unless you're looking for variety, isn't necessarily a bad thing. There have been some great Star Wars games, Shadows of the Empire for instance, but none put you into the thick of major moments quite like the Battlefront series. If you're a big fan of the saga, but haven't played these games, you've done yourself a major disservice. Sadly this crew went on to make Lord of the Rings: Conquest, a review of which you can find on this very site.

If you're a big fan of the Star Wars saga, but haven't played its licensed games, you've done yourself a major disservice.Peter Jackson's King Kong (Xbox 360, 2005): A simple first-person shooter, but a quality launch game for the Xbox 360. This game followed the story pretty well, offered basically free achievement points, and wasn't long enough to get frustrating. The film is what you'd expect from a remake of a remake of a film about a giant gorilla/monkey/ape, which doesn't sound like anything too great, and to me wasn't. The game and film feature Jack Black in a semi-serious role, which was intriguing, but still not his greatest work. Games made from Peter Jackson films are essentially great at following the story/plot elements of Jackson's movies while making them interactive enough to draw the gamer in. Probably the weakest game on this list, but still better than many other film-to-games.

The Godfather (PS2, 2006): Essentially a rip-off of the Grand Theft Auto series on the same console, but with the license of possibly the greatest film ever. This game features one of the greatest acting ensembles ever to be found in a video game. Actors like Robert Duvall, James Caan, and even Marlon Brando himself (who didn't make the final cut) recorded their voices in an effort to bring the film to life. The action was fun, although quite repetitive. This would just be another True Crime: Streets of LA if it didn't feature heavy backing from the original film's actors. It's crazy that they didn't get Pacino, who would basically do anything for a buck (like Godfather III), but got Duvall to come aboard. The newest iteration in the series deviates heavily from the second film in the series, but this one kept as true as a video game could.

That's it. That's my list. I featured only games I've played, and only on the systems I played them. I may have missed some, so come to the boards, and let me know which ones are your favorites!