NHL 10 on Game and Player 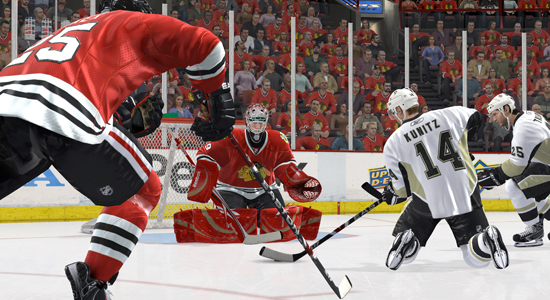 Perhaps fewer reasons to re-up on a new game.

ast year, NHL 09 blew players away with some of the highest quality online sports gaming ever seen. EA Sports came up with a winning formula with Be a Pro mode, and used that to its advantage in multiplayer. No other hockey game, or really sports game, can compare to the level of reality that NHL 09 had reached. With the release of NHL 10 comes a big question: is there enough change to warrant a purchase, or is this just more of the same? EA Sports has come to the table with perhaps fewer reasons to re-up on a new game.

With NHL 10 , Battle For the Cup Mode, and Be a GM Mode are the significant additions. Battle for the Cup Mode acts largely like your basic standard exhibition mode, but with playoff atmosphere crowd chants and storylines that will develop during your run to the cup. Player injury is a good example of a potential storyline you might encounter. For the most part, however, these scenarios are quite shallow and don't offer too much in the way of enhancing the experience. You won't notice differences on the ice, but the crowd is certainly more lively (although there was an instance where they cheered "MVP!" after a Donald Brashear fight, which I found ludicrous).

Choose the way you'd
like to play the game.

Be a General Manager mode plays similarly to franchise mode, but with specific administrative tasks being set out for players, rather than the typical win-the-championship-and-we'll-be-thrilled attitude. Making good trades and improving your team as a whole will result in your reputation increasing as a GM. While there is definitely room for improvement, if simulation is something you're interested in, you may find that this is for you.

As far as in-game tweaks that have been made in NHL 10, board play is the major difference. If you want to get behind the opponent's net with the puck these days, you're going to need a lot of room, otherwise you'll be pinned against the glass, while the opposing defense relinquishes you of your puck carrying duties. Not only have puck battles along the boards been added, but now passing using the boards can be used effectively at will. This new feature opens up a lot of passing lanes that were impossible to use in the earlier NHL franchise games.

With board play, physicality is forced into a lot more scenarios, which in turn leads to more physical play elsewhere. There's not nearly as many big hits in this game, so when you lay one on a player, you feel more accomplished than ever. After the whistle chaos is another big difference in NHL 10. You can now start ten-man brawls with one another if having your opponent's glove smothering your face isn't exactly your cup of tea. For the most part these scrums don't result in much other than something to do between stoppages, but occasionally (and without any particularly obvious logic) you might get a roughing penalty. You have been warned.

The fighting system has been overhauled, and is now a first-person affair, instead of the usual third-person squabbles players are used to seeing from last year. It's still not a perfect fighting system, and knowing EA Sports, it'll probably change again next year, but for now this will do. If you fight a time or two, you may notice your player sporting a black eye when he leaves the penalty box later in the game. That is an effect I can appreciate.

Penalties have been toned back down since the debacle of NHL 09's final patch update. You've got a significantly more freedom to check players who constantly go for the cross-crease goal, which is still one of the more popular goals you will see in online play. Laying on the ground is a lot more dangerous for the player using his body for defense, as more tripping penalties are being called with that type of play this year.

Goalies have a large number of new animations, and significantly tougher to beat early on. Skater AI still leaves something to be desired, though, as teammates will generally avoid taking any shots not called for by their human masters. Also, in order to call for the CPU to take a shot, you have to risk taking a tripping penalty with a poke check — an annoying oversight. The passing system in NHL 10 seems to be a lot more precise directionally, but there seems to be limited control of how hard (or soft) a pass comes off your player's stick, which will lead to many costly turnovers over time for even the most seasoned veterans of this game. Another thing to watch out for, is hooking penalties coming from stick lift attempts. You can still get high sticking for stick lift tries also, but now random hooking calls have been added to the mix.

Deflections are far more common to see attempted by players in front of the net, and goals off of such deflections are also more excessive. I have not seen any boarding, or checking from behind calls, which I thought were terrible last year. They may still be in the game, but they are certainly less frequently called when smashing a player into the boards. The puck itself is a lot more lively in NHL 10, so players can now catch it out of the air, and sometimes defenders will even bat it out of the defensive zone with their stick, when it's still in mid air. I wish there were a way to control these types of actions, but it seems all loose puck play (deflections, catching the puck, batting it out of the air) are all controlled automatically by the game's engine.

AI teammates will generally avoid
taking any shots you don't call for.The introduction of different game-styles in NHL 10 does allows you to customize your experience to a degree. Ranging from basic to hardcore, accuracy, passing, speed and checking are just a number of the sliders you're able to adjust. Not only does this allow you to choose the way you'd like to play the game, but it gives EA the ability to tweak the online experience as exploits and glitches are undoubtedly found.

EASHL is a bit more streamlined this season. Team's stats are kept in a more in-depth fashion, but there's a major flaw with NHL 10's online Be a Pro mode in the sense that money can buy happiness. What I mean by that is that in addition to having the option to play for bonus attribute points, players can now purchase any item in the game with real-world cash. This makes for some quite unbalanced online competition, in my eyes. Challenges, such as playing at least 120 offline games with great stats, can now be bypassed with micro transactions. I hope selling online bonuses isn't something that other companies are going to follow. In-game sponsorships are one thing, but paying to play better, given the objective of the EASHL, is another. A separate division where people who purchase their stats can play with other people who purchased their stats, and vice-versa, would be a nice alternative.

There aren't too many significant changes between 09 and 10, and there probably won't be too many changes between 10 and 11, and so on. This game has its own market already carved out, but I do not see this game becoming any more popular or mainstream than the last. If anything, the micro-transactions that allow certain players to advance, will alienate a large percentage of the audience from last year, and the community could be a lot less consistent and sustainable. It may be harder to recommend this game to people who don't already love hockey. If the online mode wasn't already segregated a week into the release of the game, and I thought the offline computer AI presented a more sustainable challenge, I would champion this game to no end, but with some repeat problems from last season, it's difficult to measure how long I'll be sticking with this release.

That being said, those who largely enjoyed NHL 09 are more than likely to find something to latch onto with this year's release.

What I'm dying to know: are my beloved Albany River Rats still present in the game? While I haven't picked up an NHL release since '08, there was nothing I enjoyed more than playing against the Canadiens or the Maple Leafs in Albany's Times Union Center.

You can still use your beloved River Rats. Phew!

I've only played a couple of games so far but I've been enjoying it. I'm just working on finishing up my final achievement in DiRT 2 & then I'm going to get more into NHL 10.