UFC 2009 Undisputed on Game and Player 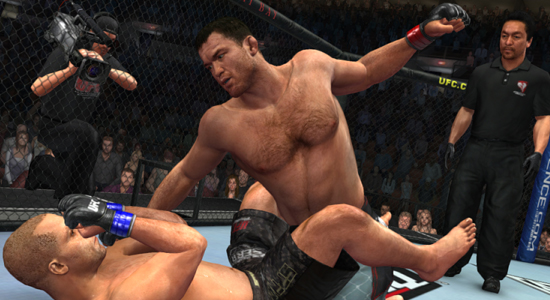 Evolution in the fighter genre.

hen I think of UFC 2009 Undisputed, the first word that comes to my mind is "brutal," followed closely by "action." This game is non-stop fun and excitement from the second you turn it on (and the menu music off, or was that just me?). The presentation is distinct in that it nearly replicates a UFC event/show perfectly at every turn.

Every segment leading up to each match is exactly like you'd expect while watching an Ultimate Fighting pay-per-view. Tale of the tape, fighter introductions, even the referee starting the fight — it's all there, and just like you remember it. I don't know that any simulation sports game has ever come this close to bringing the atmosphere of its actual counterpart to life. This is easily one of the best fighting games I've played in awhile.

It relies on reality,
not spamming cheap combos.

To start off, I want to talk about the fighting mechanics. At any point during a match, fighters are at risk of being knocked out. Doesn't matter if you've spent three rounds pummeling your foe, if you leave your hands down, and your opponent gets a strike through your lackadaisical defense, it could be lights out, instantly. To me, half the excitement of each match comes from knowing that any misstep could be the difference between winning and losing.

Each maneuver is magnified to a level that I can't compare to any other gaming experience. The subtle movement of the right stick, reversing a ground position, and giving your fighter the upper hand, is everything I'd always dreamed it could be while watching actual Ultimate Fighting Championship events. This is a fighting game that relies on reality, and not on firing projectiles and spamming cheap combos. Street Fighter IV brought a nostalgic blast of arcade sportsmanship into the gaming market, but UFC 2009 Undisputed represents an evolution in the fighter genre.

The graphics are perhaps one of the most impressive aspects of this game. Fight replays could be mistaken as actual UFC replay footage by the untrained eye. The sweat, blood, and contact between fighters are all carefully and realistically handled for the game. You won't see too many crimson masks on your opponents, but when you cut their eye, or bloody their nose, you'll notice the effects throughout the fight. Bloodstains on the ring may be one of the most overlooked graphical achievements in this game. Every drop of blood that hits the mat remains there until the fight is over. There's nothing like threatening someone that you're going to slam them back on their own bloodstain for the finish of the match, and then actually executing the plan. The pain on your enemies' fantastically animated faces provides deep satisfaction to the winner, and is just another aspect that improves the atmosphere of this nearly perfect simulation.

This game provides fluidity in gameplay, and also offers complete control over every aspect of a match. There's four different standing-grapple positions, an endless number of ground-grapple positions, and reversals for everything, so you'll be seeing a different fight every time. I've played more fights than I can count, and each bout has brought something different to the table. Sometimes you'll fight a guy who you own on stand-up, so you'll strike the whole fight, but then the next guy you fight could be lacking on the ground game, so you take him down, and go to work.

Sweat, blood, and contact between
fighters are all carefully and
realistically handled.There are countless scenarios to find yourself in, and with 80 actual UFC athletes, and 100 slots for created fighters, you'll be hard-pressed to run out of new things to try. While the roster is pretty large, I could've gone for a little more MMA throwback love. There are no retired fighters in the game, which bums me out because I wanted to recreate the epic hour plus matches of Dan "The Beast" Severn, and Royce Gracie; but I guess they're saving that for the sequel.

I think the longevity in replay value lies within the game's online component. Not only can people face off with the 80-plus roster of actual UFC fighters, but they can even bring their created fighters into the online arena. This brings career mode even more importance, as everything you do to train your created fighter will make a difference in his overall performance for the rest of his career, whether it be online or offline.

There's a bit of quitting online, so when you see players with "12-fight win streak," you can usually take for granted that guy will quit when you tap him in the first round. Not sure why, and I hope a patch comes soon, but the game doesn't penalize players for leaving matches before the results are saved, — so cheaters have a field day when they feel it necessary. There's not a lot of variety in the match options for online (or overall, really), and I wish a tournament mode could be set up, so that a party of friends could all participate in UFC matches together, instead of having to wait turns in the menu. Perhaps there's something in future DLC to look out for.

The best grappling system I've ever experienced, a simple combo system for pick-up-and-play ease, and all the reality a hardcore UFC fan could ever ask for are here, in a video game counterpart. This game is a must own for anyone who needs a refreshing fighting game in their collection. UFC 2009: Undisputed is perhaps the greatest simulation in sports gaming history. NFL Madden, NBA Live, and even NHL 2009 are at a loss when compared to this beast.