Stormrise on Game and Player 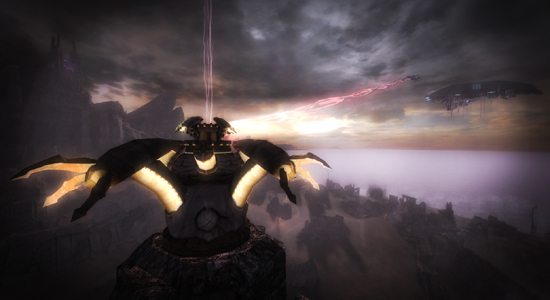 Would that "macro-tactical" be a retail category.

ity Sega, and pity the Creative Assembly, whose game Sega published: Stormrise can't catch a break. Some critics have progressed to detraction, panning the game on relative terms (Edge considered the month's delay between releases of Stormrise and Halo Wars, double that between Halo 3 and The Orange Box, "commercial suicide") or stiffly absolute ones (GameSpot pronounced it "one of the worst strategy games in years").

Fault is shared by developer and publisher. Anxiety over marketing a novel interface, maybe, led to placement of real-time strategy's square peg into this round hole; Stormrise differs signally from the RTS genre. But Sega and the Creative Assembly also goofed in blithely presenting their complicated — and trial — work to an establishment that, on balance, turned out to be neither objective nor inquisitive.

With Whip-Select, space on maps
is determined by occupation.

Enter a post-apocalyptic struggle. Essaying to reverse anthropogenic something-or-other, scientists immolated the modern world, then enabled civil remnants to enter secure hibernation — at the exclusion of millions whose generational exposure to a boiling planet mutated, and then consolidated them, though not at the expense of their particular accents. People of Brooklyn, you are apparently children of the rad-revolution. Inside a fortress of privileged exiles, protagonist Geary awakes to discover his lineage is — disputed.

Stormrise operates from third-person perspective, not the variable bird's-eye-view of RTS; and usually at a scale of about 1:25, again deviant to breathtaking RTS scales that exceed 1:300. Small-unit engagements dominate gameplay, affording players access to and exploitation of topographical nuances that become, in RTS — when one has a mass of units sweeping across the landscape — incidental. Stormrise isn't RTS. Would that "macro-tactical" be a retail category. Could be, but Sega apparently chose to invest in one big idea at a time.

Central to controversy is a method of unit-selection the Creative Assembly dubs "Whip-Select." From each unit and materiel dispenser (bases are similarly compact), a vector may be rotated along a 360-degree arc. When the vector overlaps and highlights a friendly unit's designation, releasing the active thumbstick transfers control and vantage to the target. Thus space on maps is determined by occupation. No artificial "fog of war" blinds players — players, in fidelity to the concept, have neither means of viewing areas not within sight of their armies, nor approaching them independently.

Players' control of a second axis, along the ground, inverts — aggravating RTS players who will expect simple control of a viewing window, but, as one continues to use the interface, correctly does so like a first-person-shooter or flight simulator, since its point of reference is never remote. Targeted units can be approached with one button; summoned with a second. Forces, three single units to a group, maneuver with a kind of antiphony, the main column following point. Again, the Creative Assembly emphasizes discrete relations of one unit to another, rather than a unit to geographic locations.

So what? So Stormrise confounds face value. Strategy projects sequential means toward a goal, especially across that which is only foreseen. Tactics utilizes immediate surroundings for expedient goals. What is strategic is speculative, and what is tactical is perceptive — those are sharp distinctions. Many reviewers seem to have missed this.

Exploit nuances that become
incidental to RTS.Certainly, Whip-Select's practical operation exposes a few flaws, and the Creative Assembly gave it too few ideal scenarios. The Whip-Select vector often picks up bases, which 1) are often at a disorienting length from engagements, and 2) supercede Stormrise's only hotkeys, forcing a player to either pick the right unit in a compensatory split second or pick one unit — any unit! — and then press a hotkey. While the game's scale obviates titanic formations, the inability to direct more than a three-unit group with one order results in, as it were, orphans and widows.

But then, organization and pathfinding are problems endemic to war games, RTS or, regarding this game, otherwise — anyone who has built more than six of Halo Wars' ODSTs or specialty tanks knows this. Stormrise's plot is fresh; whereas the United Nations Space Command battles the Covenant and the Flood among techno-wonders of the dead ages that necessity would see destroyed in Halo Wars, just as it did in Halo 3, Halo 2, and Halo: Combat Evolved.

Comparisons are both problematic and instructive, though not without careful judgment. Ensemble Studios solved the challenge of a console interface for a complex genre by developing a simplified game. The Creative Assembly was a little more cerebral. Where is the standard? It resides with Halo Wars. That one is imperfect at the same time it is a lot of fun — but so is Stormrise.