Resident Evil 5 on Game and Player 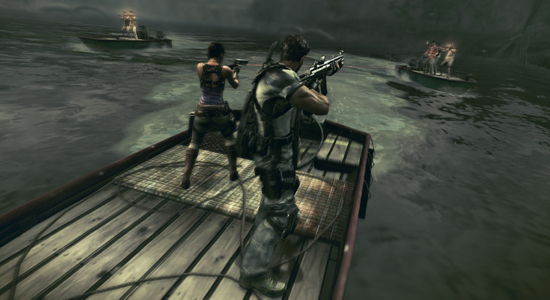 A valiant effort — but not a masterpiece.

t is no secret that I'm a fan of the Resident Evil series. I recently reviewed the original in anticipation of the latest release in the saga, Resident Evil 5. It's been a couple of years since I ran through the campaign on Resident Evil 4, but as soon as I begun to play this iteration, it was as if I never stopped.

The controls are much the same with one big difference — your inventory must be handled in real time, instead of at a pause menu like every other Resident Evil ever released. There are more differences, and I'll get into those shortly, but I think it is safe to say this game will please anyone who enjoyed Resident Evil 4. If you're more of a fan of the traditional survival-horror elements from the earliest installments of the series, this game may not be what you're looking for. Instead of an instinct-driven survivalist tale, this is an action- first, cheesy-dialogue-driven, stop-and-pop shooter.

Another room, another bad guy:
there is a formula, and the
entire game follows it.

To start, this is the first major Resident Evil release to feature co-op gameplay throughout the entirety of the game. In fact, it doesn't just feature cooperative play, but relies on it in most instances. Your teammate's computer AI leaves much to be desired, with its silly habit of following you along like a loyal pet; but like a pet it doesn't understand a damn thing you're trying to say, and thus is of little help. For the most part, you just have to hope the computer doesn't run straight into enemies' weapons, which it will do time and time again. You can command your computer assistant to follow you, but that's about the only command there is. I'd have appreciated something a little more intuitive, perhaps with the ability to tell the dumb animal-like AI. to "stay," or "sit." I would love to see how someone beats the final boss with a computer partner. To me it seems like that would be a ridiculous feat in itself.

If you have a friend who's willing to jam this with you, you're in for one of the best cooperative campaigns I've ever seen. The best part may be the nearly endless replayability this game features. Usually I'd say a game that features so few game modes would be worthy of a rent, but in Resident Evil the weapon upgrade system, unlockable elements, and "The Mercenaries" mode certainly make a case for a purchase. All of the weapons you buy/upgrade stay with your gamertag, so if you jump online with a friend, so to will all your story-mode efforts. To me this is a great thing, and adds to the fun-factor of online play. The fact that you can share the wealth with your teammate is also a plus.

Resident Evil 5 is co-op online and offline, so it's perfect for anyone with a friend to play with, even without Xbox Live capabilities. It is a bit sneaky with offline co-op, since there's no actual option for it in the game menu, but instead requires a guest to just hit start during game play. I imagine this has led to many a headache, especially since the game's booklet didn't help along the matters with any information.

While Capcom made true on their promise to provide a defensive cover system, it's primitive at best, and allows very little flexibility to one's tactics. There's also the matter of not being able to fire on the move, or without your gun held in front of your body. Unlike Gears of War 2, which to me is the epitome of a third-person shooter, Resident Evil 5 doesn't allow a player to use "hip-fire," or "free-scope" methods for gunplay. Here you must hold the aim button before you can fire your weapon, which can be frustrating when facing a horde of enemies at close range. In Resident Evil 5 the characters can run around with their guns drawn — but only in cut scenes, for whatever reason.

I think this is ridiculous, and is nearly unacceptable in this generation of gaming. There can be a case made that Resident Evil has its own style when it comes to shooting games, but this is just an excuse in my eyes. If not being able to move and shoot annoys you, prepare for a love/hate relationship with Resident Evil 5.

'The Mercenaries' mode is
worth the purchase.The music in Resident Evil 5 is forgettable at best, and did little to add to my enjoyment of the experience. In the years since the original Resident Evil games, it seems Capcom has done their best to make this series into as generic an action film rip-off as possible, instead of being a creepy game that relies on atmosphere as much as action. Never would I have expected Resident Evil to become a game where rooms fill up with loud mouthed enemies holding machine guns, whose heads turn into giant bugs when burst, but that's what has happened.

This game has a formula, which consists of entering a room, hitting some sort of button/lever, and then a flood of enemies on either side. The entire game follows this formula, and then feeds you a boss battle to end each portion. If you're not interested in repeating this formula for 7-12 hours, stay away from Resident Evil 5. The story mode is hardly worth anything on its own merits, so you have to be willing to accept this game's shortcomings to find true enjoyment.

Capcom isn't known for their online/multiplayer focus, but here it seems they have gotten it down. Sure, a lot of the depth of previous installments is long gone, but there's still fun to be had blasting crazy villagers with the game's 20+ weapons, as your partner asks where you are for the five hundredth time, as you remind them they can easily hit a button for the answer on their own.

I don't mean to make this game sound amazing, nor do I mean to bash it, but I just don't see the masterpiece that many people claim this to be. Dumbing down portions of the previous installment (I can't use an item if my inventory is full, anymore?), and adding a nice coat of graphics, just isn't what I call a masterpiece. It's a valiant effort, and possibly one of the top five games released in 2009, but it's still a young year. If you're looking for zombie-dispatching fun, go look elsewhere, but if you're down with something more along the lines of Rambo for two players, this is game is for you.