Flock on Game and Player 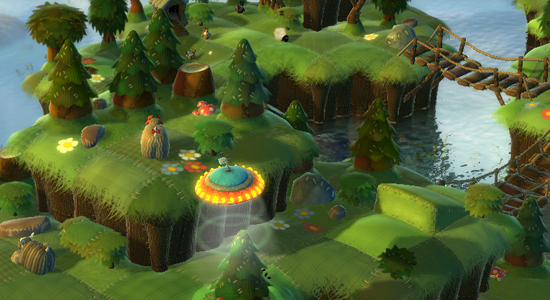 n "arcade" is where video games came from, though in modern parlance, the word implies this origin as readily as it does a design concept. While products so labeled run the cheapest, they define amusement as alchemy: simply engineered, yet neither insipid nor too derivative. Easy enough to invent the running race, the top and the ball — but you have to concede, what in heavens did we have before that?

Developers at Proper Games asserted the market's lack of titles animating physics puzzles with extraterrestrials who maraud barnyards. Capcom believed them, and in turn published Flock, a perfect-form timewaster.

Sheep shrink because they are,
you know, made of wool.

Players assume command of a flying-saucer drone launched by a starship called — parents, here you may at least offer a lesson in punning — the Motherflocker. Confirming pastoral superstition, the UFO combs farmland by day and night for sheep, cows, chickens and pigs.

For reasons known only to those beyond, quotas of abducted animals must be met. The UFO's search-beam startles and repels the creatures who, naturally, consolidate and can be driven toward the Motherflocker waiting to scoop them up — so in each of Flock's 50 single-player levels, players fly over the countryside, bundling hapless ungulates to their uncertain xeno-fate.

Sheep are the most pliant; fences constrain them but water (since, Proper volunteers, sheep are "made of wool") helpfully shrinks them. Cows knock over fences and clear dung heaps, but stampede if pushed too far. Chickens and their twittering chicks, skittish, glide from ledges. Pigs tuck themselves into balls, leaving patches of mud only reluctantly. First tasked with shepherding around a flat maze of hedges, players soon contend with fenced occlusions, hills, chasms, catapults, pits and wolves darting out to snatch one or two from the group, and more.

Perhaps because the game's mechanics resemble those of a wooden marble run, Proper Games built its CG idyll out of fabric. Each level, a kind of archipelago, has some corduroy, twill and velvet laid in patchwork as if to take the character of American farmland literally. Cows are tasseled and the Motherflocker appears to be cut from butterscotch vinyl.

Music and sounds cinch up a tightly harmonic production. Flock's main title is playfully eerie to a fault, led by its theremin solo. Later on, it's joined by fare that is appropriately hayseed. One jangles; another rollicks; another captures the lazy, setting sun's glow. Drawing from the same stock effect catalog as other arcade games, Proper's designers showed finer judgment than most. Every noise belongs, and plays where it should — most of them are bucolic and the effect is adorable. No one could play Flock for long with a straight face.

Count few straight faces. Level completion earns players a new puzzle piece for use in their own creations, and levels may be shared online. There is co-op, too. Flock's concept, elastic, will survive any number of variations in size and theme. Proper Games tried simple and found a paradigm.