Demigod on Game and Player 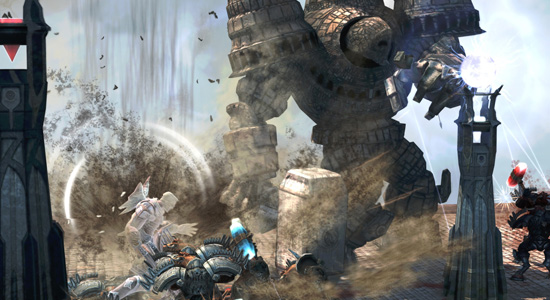 he real-time strategy genre has been enjoying a much needed resurgence as of late — developers have finally caught on to the fact that after nearly two decades, the standard formula might benefit from a bit of change. This "new breed" of RTS rewrites many of the standard conventions of resource management and army control. Few titles embody this trend better than Gas Powered Games' Demigod — by automating many of the processes which tend to bog down new players and providing maps which truly highlight tactical decisions, you'd think the developer would have an instant hit on their hands. Sadly, you would have thought wrong.

At its core, Demigod is simpler than many RTS titles. Players primarily control a single unit of their choosing whilst support infantry goes about its business with (or without) any direction from you. Even building upgrades happen automatically, which means that your only real job is to steer your hulking brute of an avatar through the twists and turns of the game's environments. By completing objectives and defeating enemies, one can level up their avatar, unlocking new skill sets and attacks. Sounds simple, right?

Well, it would be, if not for a glaring omission — Demigod contains no single player campaign whatsoever. That's right. None. Nada. Zilch. Sure, there are single player skirmish modes aplenty, but none of these provide the learning curve that's required as one attempts to understand the game. Even after eight hours of experimentation, I was still coming to grips with core play mechanics — for all that's been simplified in Demigod, there's still plenty to learn and no good way to learn it.

It's a shame, really, because anyone with the patience to try and master Demigod is in for a real treat. In terms of visuals, this is probably one of the best looking strategy titles I've ever played. Details and textures on many of the game's character models are downright breathtaking — in particular, Rook, the walking fortification that has become the poster child for Demigod, is quite a sight to behold. There's something really gratifying in laying out three or four opponents simultaneously with a single hammer blow. Still, most of the other "demigods" in the game's lineup lack Rook's grandeur. As well-balanced as Demigod's pantheon is, most of these characters are pretty forgettable.

Regulus isn't.I'd imagine that the majority of online battles boil down to Rook vs. Rook duels as a result of this uninspired design . Note I said "imagine," because I myself have yet to successfully enter a match via publisher Stardock's online portal. I understand a game having matchmaking woes at startup, but when multiplayer is clearly the focus of your product (as is evidenced by the lack of a single player campaign), you'd better get it right. As it stands, I spent my many hours with Demigod preparing for online battles which never came.

Overall, Demigod's story is one of tragic disappointment. What should have been the most accessible RTS to hit shelves in years was instead made downright obtuse thanks to a complete lack of tutorial. Beautiful visuals were deadened by uninspired design, and a broken back end made networking with real life opponents nary impossible. While I'm certain that future patches will rectify Demigod's matchmaking woes, little can be done to address other failures. Having spent countless hours toiling away in the game's single player, I'm left wondering what could have been given a bit more time and love. In it's current state, Demigod is hard to recommend.