Resident Evil on Game and Player 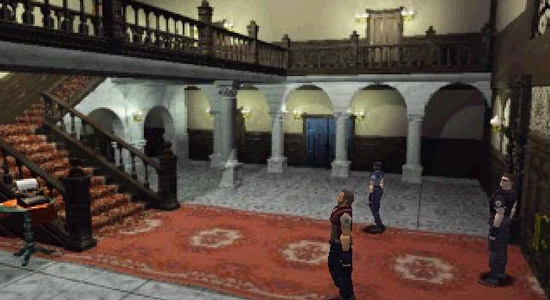 he year is 1996, and you're already dreading 1998. Why? Well because that's the year the infection begins to take hold on America, most specifically, Raccoon City. If you've played Resident Evil on the original PlayStation, then you probably remember the opening cinematic from Capcom's survival-horror masterpiece. Chris, Jill, Barry, Al W., all just standing around the shredded corpse of a B-teamer. A flash cut of what looks like a rabid dog, some running, some gunfire, and all of a sudden you're stuck in one of the creepiest buildings in the history of games. What next? "Don't open that door. . . ."

The classic that is Resident Evil is not a classic because of the fluidity of gameplay. The characters handle like some kind of crane that's used to construct buildings, and not like the human beings they were supposed to represent. Is that a bad thing? Depends who you ask because a lot of people chalk the fear factor in this game up to the game's rigid controls. Personally, that was never a plus to me, but it also didn't get in the way of me enjoying this visceral experience. Before Left 4 Dead brought the world run-and-gun zombie action, Resident Evil was giving gamers their first chance to execute zombies via headshot in three dimensions. It's that fact that really brought this game to the forefront of the system's early library, and it was the fun B-movie storyline that kept the masses coming back.

Resident Evil may not have a lot of variety in character movements, but there were a ton of different weapons that could be handled. Handguns ranging from semi-automatic to revolver, and grenade launchers with multiple types of rounds to acquire are just a taste of what could be found in that grisly mansion. The real problem in a game like this isn't the types of guns you use, but in fact how (much?) you use them. Ammo conservation is one of the cornerstones of survival-horror, and Resident Evil was never shy about throwing you into a hall of zombies with nothing but a combat knife, if you couldn't keep your itchy trigger finger in check. Another thing that had to factor into ammo usage was the type of enemy you were up against. There are multiple creatures scurrying about the latter parts of this beast, and even worse, some are over three times the size of the playable characters. Spending that rocket ammo gets put into perspective the first time you're chased around an attic by a 50-foot snake.

The atmosphere is key in any type of horror story, and in Resident Evil, the music sets the tone with some great pieces. Music isn't just a set piece in this one, though, as the main player is forced to either learn some sheet music, or figure out a clever way to get that sheet music to play itself, which is an interesting way to develop some of the story's characters. Audio is just as important in figuring out what's up ahead in Resident Evil, so the player will have to listen carefully for oncoming enemies that reside just off camera. Speaking of camera, Resident Evil goes for a very cinematic feel, and uses different angles for each and every room you traverse throughout the game. Sometimes these angles are horrendously ineffective, which is exactly why the audio direction is a key factor. No sounds in this game are a mistake, so if you've heard glass breaking in another room, or some sort of squishy noises down the hall, you better have your gun at the ready, or your running shoes tied.

Rockets, please: the first time
a 50-foot snake chases you
is always the hardest.Replayability is certainly not the main focus of Resident Evil, but there are unlockables that can be earned by the most cunning of horror survivalists. No multiplayer here, but I've rarely ever heard a complaint from a dark room full of gamers watching this one, so don't be shy about sharing with another who hasn't gotten a chance to see this one unfold before their own eyes. The story is as entertaining as any I've ever encountered, and there's a lot of depth there for anyone who's willing to read all of the files strewn out across the game. Each character plays his role perfectly, and any horror buff should be able to find enjoyment in the scenes that play out in this one.

Finally: the puzzles. Resident Evil has action, gore, comedy, music, atmosphere, but it also has puzzles, which seem less and less an emphasis in single player experiences these days. Some are simple, some a little more complex, but each is thought-provoking in its own way. A very welcome break from the monotony (yeah, right, I can't get enough) of zombie slaughter. Not sure there were any better games released in 1996, and I'm almost 100 percent positive that none captured the essence of horror films like Capcom's Resident Evil. This one has been re-released numerous times, so anyone who wants to go searching should be able to find this for the PSX, GCN, DS; and in Japan, the Wii.