Prince of Persia: Epilogue on Game and Player 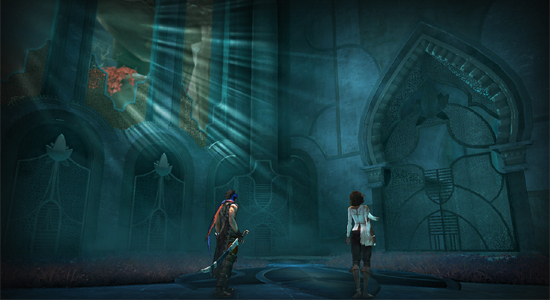 t was for reasons of proportion and timing, not commerce, that Ubisoft Montreal announced "To be continued" in the whirlwind finale of Prince of Persia. Retailing on Xbox Live Marketplace and PlayStation Store, bonus content Prince of Persia: Epilogue closes the new series' plot arc and projects another — adding one more chapter to a story that will only disappoint if left unfinished.

Epilogue opens moments from Prince of Persia's last frame, the prince carrying Princess Elika in his arms through a dusky sandstorm. The two take refuge just inside the palace gates of the City of Light, and after a minute's rest their odd rapport resumes.

À outrance: the prince
and Elika must escape from Ahriman.

Ahriman's wrath has brought the storm, the prince's brinksmanship having at once defeated and spared the demon — foolishly, thinks Elika, who requites her savior with indignation. But Ahriman intends to strike and escape is only possible through the palace; so the prince gauges that ledge above him, Elika behind him, the pair again working as one.

Ubisoft did not exhaust its collection of tricks and traps, nor has it, apparently, ignored complaints from players missing a challenge. After a brief acquaintance with gameplay mechanics aloft shallow floors and trivial consequences, one palace corner turns to reveal new platforming sequences, atmospheric and creative, and beginning at the level of difficulty reached by the end of the last game. Epilogue's challenges make use of button combinations and technique not emphasized in Prince of Persia — and even perspective itself, the player's frame of reference tilting and twisting as Elika and the prince advance, demanding much more precise choice and timing of maneuvers than before.

The franchise's latest exquisite offering of architecture as obstacle course frustrates only occasionally. Vaulting forward as the prince, with a fraction of a second's consideration, is like playing an etude — both exercise and recital, during which the performer can't help but appreciate the composer's ingenuity, building a vocabulary of acrobatics. In this game, fortune favors the impetuous. Don't think. Run and leap.

Swordplay, meanwhile, shows limitations of a minor release. Duels are placed arbitrarily, without the significance of the twenty-some capital clashes in Prince of Persia and, possibly owing to a lean budget, without two minor-role villains who have uttered more than howls, snarls and roars. They are the product of miscalculations in mechanics, too, more tedious than formidable, even with the introduction of new attacks that include a sprinting charge.

Architecture as obstacle course.I struggled with the final exchange for nearly half an hour, shouting billingsgate during much of it — still, Ubisoft caught me in a clever vise. Because the prince can't be killed, action is continuous, so a lack of interruptions gave me every incentive to keep trying to find out what might happen next.

Ubisoft Montreal's mastery of dialog and flair for storytelling — talents that lifted Prince of Persia above most games — are retained for Epilogue, especially needed when a single color and mood dominate three hours. The palace is enormous but enclosed, deserted and suppurating with the curses of Ahriman. Elika despairs when she doesn't rebuke. Yet the prince, the man who stumbled into all of this, leavens the uncertain flight, insisting that Ahriman can be destroyed — it's the cynic whose faith abides. His encouragement of Elika to realize nascent powers foreshadows another unexpected confrontation while it gives Ubisoft lease to surprise and please us, in coming episodes or a full feature, once more.