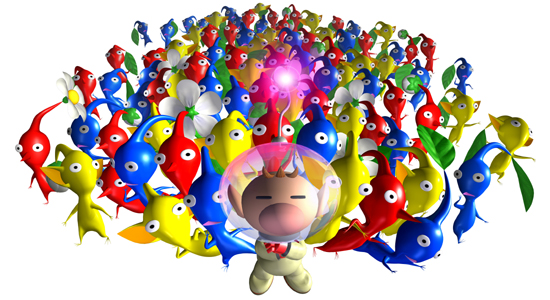 This is the way it should always have been played.

hile cynics may dismiss Nintendo's New Play Control! banner as an exploitative cash-in, this release in particular demonstrates the potential value of the brand, improving upon its GameCube counterpart in the most fundamental way, offering a control scheme that blends almost seamlessly with the unique core experience of the 2001 original.

Taking control of Captain Olimar, an astronaut holidaymaker stranded on a strange planet, you have 30 in-game days to complete the rebuilding of your ship, and safely return home. Progression involves traversing the planet level-by-level, navigating environmental puzzles and carnivorous creatures to restore one or more parts to your spacecraft before sundown each day.

Make the best of 30 days
rebuilding your stranded ship.

Olimar can't complete the task alone however, bringing about the unassuming introduction of one of Nintendo's most beguiling mascots yet. The Pikmin, tiny humanoid onions on the brink of extinction, come to your aid.

Essentially a Miyamoto take on the real-time strategy genre, you start with a small handful of Pikmin at your command, early levels spent building up your ranks into a veritable army, with the tiny minions fetching and carrying the components of your damaged vessel. As the game progresses, you discover more varied Pikmin types, three in total, with different physical attributes that need to be utilised with some deft strategy and quick thinking to complete each level in time.

The level design is carefully plotted, the learning curve gentle. Simple tasks of moving items from point A to B become more complex with each new level and increasing environmental dangers, but are never confusing. The game always keeps the tools to succeed within reasonable reach of the player, a natural coalescence of learning and advancement, of exploration and discovery.

Criticized upon its GameCube release, the enforced time limit may appear an unreasonable restriction to some, but it serves as an essential factor in building urgency to the overall game. Each in-game day lasts for roughly twenty real-world minutes, which now can be revisited in the Wii version, meaning if things didn't go to plan at any point of the journey, you can jump back in time to make amends.

The time limit also brings focus to important themes of the Pikmin experience: Natural order, and symbiosis. Nintendo triumphs in making players realize that the Pikmin need you just as much as you need them, in a world filled with pitfalls and predators. Any Pikmin left wandering the environment after sundown will be eaten by their natural predators, left alone and defenseless by their master. Mileage varies depending on the mindset of the player, but those adopting a "no man left behind" stance will find losing their comrades a difficult proposition. They are a genuinely charming creation, brought to life as only Nintendo can.

Replacing the cumbersome stick control of the original with swift cursor movements allows Pikmin, a game that despite its considerable age looks better than many Wii releases, to maintain relevancy alongside more contemporary games. The camera system is a sticking point, viewpoints adjusted using the directional pad. The location of the d-pad on the Wiimote is troublesome when used in high frequency, but its importance in general gameplay forces players to adapt quickly, feeling out of pace with the purposeful momentum of the game.

Nintendo triumphs in its example
of natural order and symbiosis.This compromise aside, Pikmin makes exemplary use of the Wiimote and Nunchuck combination where others have struggled. This is the way Pikmin should always have been played.

Superseded only by its sequel, also due for New Play Control! reworking, this is a title that belongs on the Wii, fitting the aesthetic and ideology of the machine despite preceding it by many years. Whether audiences can discern this from the platforms lower quality product remains to be seen. Visually unchanged, with no added content, anyone who has already played the original may not feel compelled to adopt, but those unfamiliar with this joyful and affecting game should feel no hesitance. The forthcoming release of Pikmin 2, an altogether more refined title that builds on the original concept, should not be of concern. Pikmin stands as a fine video game in its own right, with its sequel working as a great companion piece.

Offering a family friendly, profound experience, Pikmin, and the almost guaranteed continuation of the franchise can remind an entire generation of console owners that the true genius of Nintendo lies within its work as a game developer, not just a marketing fad.