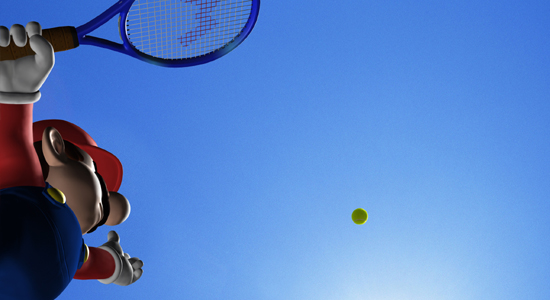 A worthy successor to Wii Sports.

At its core, Mario Power Tennis offers a similarly simplistic take on the sport, light on terminology and rules. Taking its visual cues from Super Mario Sunshine, the game is vibrant, colorful, and filled with authentic Mario imagery and themes.

Core gameplay is perfectly viable
as a Wii title in its own right.

Players young and old will find the colorful settings entertaining, a far cry from the bland presentation of the Wii-bundled phenomenon. Customization options are numerous but simple to enact, courts featuring a host of themed obstacles and novelty enhancements that can be toggled on or off in the pre-match set-up screens. The gimmicks are whimsical entertainment, and help round the game in to a more complete, fleshed-out experience.

Naturally, variations on the standard competitive match-ups feature heavily, with a host of mini-games and character-themed environments adding an extra level of play, especially suited for younger gamers. Luigi's Mansion, Donkey Kong Country, Wario Ware and many other titles are represented within the line-up, using the control scheme of the main game in a new context. The mini-games are short, and not too challenging, but are a suitable distraction should interest in the standard tournament modes wane.

As with the New Play Control! iteration of Pikmin, Mario Power Tennis remains unchanged in content from its GameCube original, and similarly, its core gameplay is perfectly viable as a Wii title in its own right. Players use the Wiimote and Nunchuck to control the action. The default control mode requires basic court positioning and a well-timed, but non-specific motion to achieve a successful contact, with the resulting shot type determined by the game itself. The three remaining modes increase the level of control the player has over the action incrementally. Most will find the early handholding exceedingly restrictive, but the game encourages the nervous to try the more advanced settings to get the most out the game, an interactive medium after all.

Gimmicks are
whimsical entertainment.While the control style is adaptable and comfortable for newcomers, there are problems with implementation that more experienced players will be hard pressed to overlook. At times, there are some input delay issues, and on occasions, motions are interpreted incorrectly or not recognized by the game at all. It is difficult to justify oversights in such fundamental areas, but in truth, those hooked on Wii Sports and similar releases will not notice the control issues, and the game, to whichever extent they control the action, will remain enjoyable.

Mario Power Tennis, like so many Wii titles, shines brightest when played with others. With no provision for online multiplayer, a room full of competitors makes the experience complete, adhering to the family gaming aesthetic so vehemently portrayed by Nintendo. Designed for occasional players, not for the serious sports enthusiast, it captures the shared gameplay experience that makes Wii so vital to its audience, offering a competent take on the sport with the classic Nintendo characters adding color and personality. Its controls lack accuracy, but to an audience invested in novelty over functionality, it will make perfect sense.