MadWorld on Game and Player 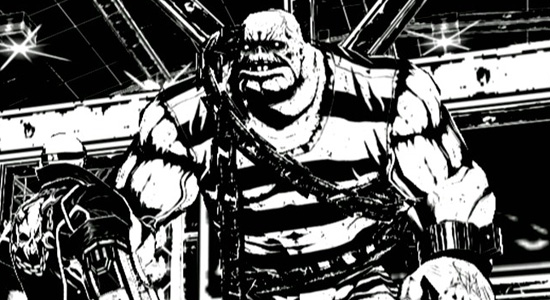 edia studies of violence are nothing new — Oliver Stone's Natural Born Killers was both adored and reviled for its over-the-top commentary on violence (and its glorification) in America, and the work of Quentin Tarrantino and Frank Miller can't be too far behind. While Atsushi Inaba and the rest of the staff at Platinum Games have yet to identify their most recent Wii release MadWorld in such terms, the thought has to be on the minds of many. When violence is this gratuitous, it's nearly impossible to take it at face value.

Umm, sir? Is that a lamppost sticking
out of your head?

MadWorld has been turning heads since it was first announced. With black and white visuals that seem to replicate the work of Frank Miller and unique brawler mechanics at odds with anything else available for the Wii, it's the sort of title that could make or break a fledgling developer. Of course, Platinum games isn't entirely unproven — comprised of the remnants of Capcom's now defunct Clover Studios, these are the same artists who brought us the likes of Okami and Steel Battalion. That past experience shines right on through.

Platinum Games had to overcome many hurdles in the development of MadWorld, not the least of which, I imagine, was the title's platform. It's hard to create visually arresting games for the Wii, but Platinum seems to have coaxed quite a bit of performance from the system. The stark black and white of the urban environment is complimented by plenty of red — this is one game that truly lives up to its M-rating.

Extreme violence is the driving force behind MadWorld, and its environments provide plenty of ways for players to do in the competition. Everything from tires to street signs can be wielded by protagonist Jack — making ample use of these tools will net higher scores in the end, but when you've got a chainsaw for a hand, finesse isn't always necessary. At level's end, the result is usually the same: the streets have been painted red.

For a Wii game, MadWorld's controls are pretty straightforward. The nunchuck handles movement and jumping. Waggling the Wiimote in time with onscreen cues opens up a wealth of finishing moves. Regardless of how squeamish the audience is, most will quickly see the humor in MadWorld's presentation — real violence is a lot less disgusting and repetitive.

And therein lies MadWorld's biggest fault. As fun as it is to play, it's over far too soon and there's not nearly enough variety packed inside its small package. Once you've seen ten jet engine fatalities or hung up fifty or so corpses on the spike train, you've pretty much gotten the gist. While never reaching the doldrums of such works as Sin City (the film, not the comic), this is one concept which would have been better received as a WiiWare title than a retail release. At $50, this diversion seems priced a bit steep for the fun it offers.

Still, it's hard to overlook the game's many achievements. Graphically, MadWorld is no less a masterpiece on the Wii than Okami was on the PlayStation 2. Add to that a sensibility which questions what is (and is not) appropriate content for Nintendo's family friendly console, and we've got a title which , while not perfect, is certainly worth talking about. Overall, I can't help but recommend MadWorld, though with a qualification: this is one treat that's best enjoyed at something less than full price.