HAWX on Game and Player 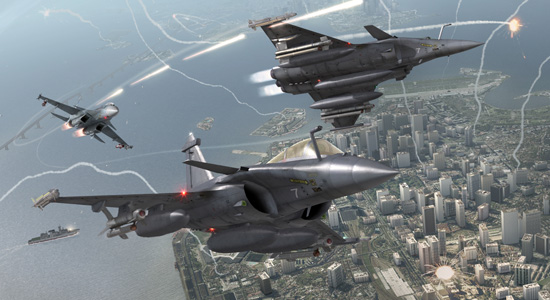 Tom Clancy put his name on this?

om Clancy's garnered quite the reputation for himself over the years, if not for his writing chops, most certainly for his attention to detail. The author of The Hunt for Red October and Patriot Games seems to know everything there is to know about the day-to-day operations of the world's militaries — even when the scenarios are grotesquely fictionalized, his stories possess a gritty realism through their descriptions of hardware, tactics and hierarchies. How is it, then, that the Ubisoft license bearing the author's name takes such liberties with these "little" details? HAWX, the latest in the publisher's Clancy franchise, laid waste my suspension of disbelief as soon as I began its first scenario. You see, the United States Air Force doesn't fly the F-18. The Navy's aircraft carriers also aren't equipped to land and service Soviet Mig-29s, but I digress.

If it were the only game of its kind available on the modern consoles, it would be a lot easier to overlook most of HAWX's shortcomings — its controls wouldn't seem nearly as sluggish nor its graphics as plain if there wasn't Namco's Ace Combat 6 to compare it to. But alas, that latest Ace Combat game, now nearly eighteen months old, outclasses HAWX at every opportunity. To its merit, Ubisoft's game does copy what it needed to from its competitor — the twin stick controls are as intuitive as you'll find on a home console and quite the improvement over Blazing Angel's confusing layout. Yet despite those smooth controls, HAWX never quite conveys the sense of speed and grace that it should. Flying feels far too much like driving, the game's aircraft more lumbering than snappy.

A far cry from the flight simulations of the PC realm, HAWX belongs to a genre which is almost exclusive to consoles: the arcade flight game. By packing a variety of modern aircraft full of a seemingly limitless arsenal of bombs and missiles, these games open up the air combat experience to those who love the "seconds of excitement" but hate the "hours of boredom" characterizing the typical sortie. HAWX's visuals are functional enough, but where the Ace Combat games ceaselessly impress with nuance and tiny details, Ubisoft's efforts come off looking a little bit plain. One key example is in the game's cockpit view. The F-4 Phantom of Ace Combat was a joyous chore to fly — not only did it maneuver like a supersonic garbage truck, the large blast shield that lived in front of the HUD obscured forward visibility. In HAWX, the F-4 flies just about the same as the Mig-29 (wrong) and the cockpit's mostly unanimated instrumentation rests plainly out of your field of view. Accessible? Yes, but not nearly as authentic (or as interesting). And which game earns the Clancy badge of approval?

In-flight assistance is a fun but
underutilized concept.The few attempts HAWX makes at differentiating itself tend to fall a little bit flat. Its "assist" feature is actually pretty cool in theory — by holding down the 'Y' button, onscreen vectors illustrate the clear path to evasion or interception — but in practice, I was usually better off making my own route and deftly manipulating throttle to get behind an enemy. Another feature is the "safety off" mode. Turn off your craft's safety protocols and you're able to pull off crazy maneuvers at the risk of stalling. This would have been great but for the fact that engaging the mode teleports you out of the cockpit and into a bizarre and disorienting overhead view. I don't know about you, but I'd rather spend my time dogfighting the enemy rather than a dodgy camera.

In terms of story, HAWX falls just about as flat as Ace Combat 6: a convoluted tale about private military corporations is no worse than one about a fictional world war. Still, Namco's design team demonstrated a love for its game's source material which Ubisoft was never able to replicate. You see, just because an F-14 can take off and land from a U.S. carrier doesn't mean that its Soviet counterpart can also. From weapon payloads to flight handling to paint schemes, Ace Combat is the victor both in terms of creativity and authenticity.

Am I being too harsh? Perhaps — there's nothing about HAWX that makes it a truly awful game. Still, it's hard to ignore the fact that a better and far cheaper title is already out there. Tom, you probably should have a good long talk with the folks you've handed your name to. You see, it's the competition that shares your passion for the tools of modern warfare.