Dune on Game and Player 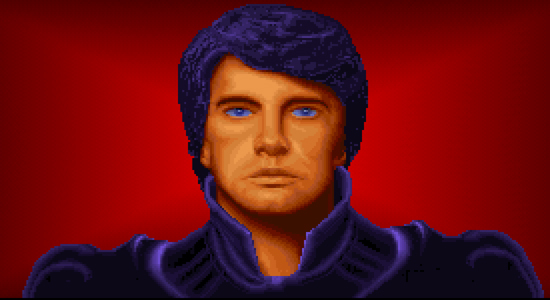 A modish take on an esoteric saga.

had never asked the question before I was given an answer: how could so few of us know about a video game based on both Frank Herbert's 1965 novel Dune and David Lynch's 1984 film adaptation? A few lines across the palimpsest that is the internet offer an account of history.

In 1992, Virgin Games published two titles bearing Dune licenses, one developed by Westwood Studios, associated with Command & Conquer; and the other by Cryo Interactive, associated with trivia buffs or blank stares. Two years earlier — according to a claim attributed to one Daniel Ichbiah —

Characters are finely modeled, many
appearing as in David Lynch's movie.

Virgin shelved the single title under development by Cryo, then solicited Westwood for a substitute. Cryo continued work and presented a finished product, impressing Virgin enough to see it to retail.

But only so, it seems. Despite an elaborate multimedia port to Sega CD, it was Westwood, not Cryo, that developed sequels financed by Electronic Arts several years later. Cryo's game is undeniably early-Nineties-French: an acquired taste. And Cryo embraced the original story where Westwood, pragmatically, shrugged it off. Herbert's afflatus for writing Dune, clarified as one reads book after book, is reportedly very weird. Cryo created an artifact, a curio — a modish take on an esoteric saga.

Dune is the colloquial name for the arid planet Arrakis, center of attention from all creation. On Dune, and only there, can be found the spice mélange, a biogenic compound — all right, the excretion of giant worms — mined and manufactured into an omnifarious drug. Minds expand, spaceships traverse, eyes go "blue-within-blue," withdrawal kills. The universe's comestible petrol can purchase more by the ounce than a share of Berkshire-Hathaway, even circa 21,000 AD.

Players assume the person of Paul Atreides, heir to the noble house named steward of Dune and chief victualer of addictive, cinnamon stuff for the reigning empire. The charge is a setup. Dune's last regent, Baron Vladimir Harkonnen, remains planetside. His attempt to exterminate the Atreides fails, propelling young Paul into primacy on Dune and beyond.

Fremen loyalty:
your power, their liberty.Cryo deviates from Herbert's narrative, changing the confrontation from a dramatic to a strategic one. Paul, while losing none of his messianic stature, is not a guerilla, as in the novel, but a governor. A combination of real-time strategy and dialog-roleplay leads players through conversations and peripety to points along a plot arc and progressive stages of complexity.

Day One, Arrakis is swaddled in the enemy's color, blue. Harkonnen regnance is spelt out in every measurable way — territory controlled, spice produced, tribes swearing fealty. Duke Leto and Lady Jessica, Paul's father and mother, introduce the most basic and practical of Dune canon: why the planet and its export are so important. Paul flies to the enclaves of native Fremen, joining his advisor, Gurney Halleck; mollifying the Harkonnen's wary former subjects and inviting them to serve his venture.

For the next few hours, players engage two interfaces — a regional map view and a window displaying Paul's current location — to consolidate the desert world's resources and population. Difficulty increases gently as players direct Fremen who first agree to harvest spice, placating the emperor; then take up arms against the Harkonnen; then insist on using trace water to replace dune seas with verdure.

Dune's strategic dimension is neither deep nor facile; rather, gratifying today as a game for train waits or quiet afternoons. Fremen tribes must be managed and maneuvered. Spice deposits dot the planet but vary in abundance, and are soon depleted. Targets of opportunity emerge on the Harkonnen defensive line. With common sense, patience and a little faculty for planning, a player will win. The game ends abruptly and not at all how Herbert wrote — though not inscrutably. Is it an affront to call Dune a series best left to one book?

Cryo's artistry is trendy, which is to say it was trendy, but those who enjoyed it once will again. My experience of it, some fifteen years later, was graced by the smooth running of the DOS emulator for Mac OS X, Boxer. Characters are finely modeled, many of them appearing as in David Lynch's movie, most of them sporting Cryo's post-punk couture. Lady Jessica is undoubtedly Francesca Annis; Paul Atreides, Kyle MacLachlan;

World domination: teach Harkonnens
the meaning of 'destiny.'Gurney Halleck is less Patrick Stewart and more of the gruff janissary with the "inkvine scar" appearing in the novel once every fifteen sentences; while Duke Leto Atreides is drawn from hand, maybe because Cryo thought beards effete or because, say, Jürgen Prochnow's agent wouldn't allow the rights.

Dune's soundtrack is, I hold, the most distinct music composed for a game — otherworldly brilliance by Stéphane Picq and Philip Ulrich, the pinnacle of single-channel, 8-bit MIDI. A fuller arrangement accompanied the Sega CD port; it hasn't the charm. In the name of educational fair use, a recording of the nine-movement suite is available here.

Cryo is defunct (so is Westwood), Richard Branson saw Virgin Games rebranded, then sold off in pieces. Their video game, little-known, may be obtained for free, now, from anywhere in the world; indefinitely, too, if its authors and producers share an interest in its deserved acclaim.