50 Cent: Blood on the Sand on Game and Player 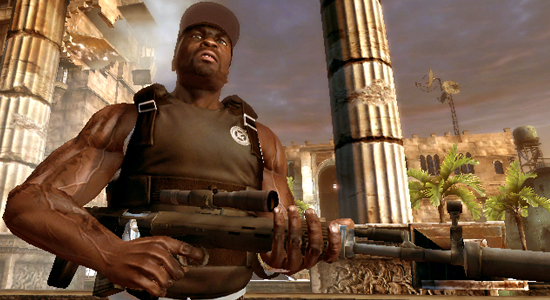 Do not ever steal from this man.

HQ's latest 50 Cent release, Blood on the Sand, is exploitative, uncouth and downright tasteless at times, certainly not the initial choice of gaming connoisseurs. It is unrefined, simplistic, and entirely derivative. Surprisingly however, there is some fun to be uncovered for those willing to hold their sensibilities at bay, and keep irony firmly at the forefront of the mind.

The plot is at best, a gleeful nonsense. After 50 Cent completes a sell-out tour of an unnamed Middle Eastern country, the shady promoter withholds payment, blaming an extortion racket for his failure. As compensation for the indiscretion, a priceless jewel-encrusted skull is offered at gunpoint.

He gotta get paid.

All seems well, until a troublesome group of mercenaries remove the skull from 50's possession in a roadside attack. "Gimme back mah skull!" roars 50, vowing to visit G-Unit branded justice upon his heavily armed, military trained aggressors. He gotta get paid, as they say.

With brain suitably disengaged, players take control of 50 followed by a G-Unit sidekick of their choice, and together rain fire upon waves of identikit villains. The controls are fast and respond well, but feel weightless, lacking the gravity and natural motion of the high-profile third-person titles Blood on the Sand so heavily borrows from, but the basics of movement and aiming are serviceable, without any major bugs or inconsistencies. The level design is crude but works within the limited gameplay, comprising almost exclusively of traveling from one waypoint to the next, finding cover, triggering a staged shoot-out, and moving on once the dust has settled.

The repetitive nature of the gunplay sequences, combined with a rather mundane arsenal would sound a death knell for most shooters, but admirably, Blood on the Sand delays the inevitable with a simple and addictive design choice: A basic score chase becomes the motivation behind the action. Adding a semblance of reason to the massacre, players are rewarded with large multipliers for increasing numbers of enemies killed within a short window of time; essentially a combo system of murder. Each room of enemies also introduces scenario-based challenges to the player, offering bonus inventory items and a hilariously overpowered flaming-bullet enhancement upon successful completion. They certainly lack variety, but the timed scenarios and chained sprees manage to legitimize the shooting gallery encounters. Vocal taunts are also used within the combo system, and players holding a less serious perspective on the game will find the expletive-filled gangsta patter adds to the comedic style of the action.

The overall audio work within the game is fairly solid, with G-Unit voice acting, and the gibberish battle cries of the AI enemies, fitting the ludicrous atmosphere. Musically, the game features a worth of new material. Made up of cutting-room exclusions and occasional chart hits, 50 Cent fans will certainly enjoy it.

The game includes some short vehicle- based missions to further break up the monotony, a particular sequence involving a large helicopter-mounted chaingun. This on-rails sequence is loud and chaotic, an action packed event in which you terrorize your cowering opponents, and merrily raze enemy encampments with conveniently placed exploding barrels. This scene in particular demonstrates the enjoyment that can be taken from the game, but also highlights the lack of cerebral engagement required to do so. It's fun, but dumb fun.

For all its base pleasures, the inherent lack of depth remains a lingering problem throughout. Some may discover a knowing sense of humor within the game, self referential and reflexive, the tone of the game depends entirely on the sensibilities of the player. It lacks class, but unapologetically so, and makes no excuses for its overt lack of intelligence and frequent political incorrectness.

Undoubtedly, some will discern enjoyment within this effort, ardent fans and the less sincere alike. 50 Cent: Blood on the Sand is trashy, but delivers on its basic goals with a large dose of fan service, delivering a relatively competent shooter experience. The game doesn't take itself seriously, and players would be advised to follow suit — but even as something for more sarcastic gamers to deride, it's an expensive novelty.