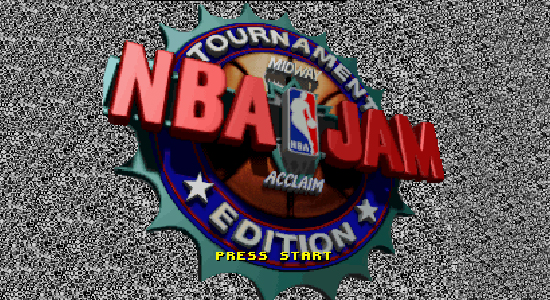 fter playing the recently released 3-on-3 NHL Arcade, which was reviewed by Game and Player's own Jeremy Steeves, NBA Jam shot to the forefront of my mind. I don't know why, but if you put an arcade sports title in front of me, a little buzzer goes off in my head that reminds me of

While it is clear that I used to love this game, I wasn't exactly sure why, so I decided to take a stroll down memory lane and replay NBA Jam: Tournament Edition, which was the second NBA Jam released on home consoles in 1994.

Smashing: there are few more
nostalgic combinations than
basketball and the 1990s.

The game was clearly not as great as I remembered, but how could it be after everything that has changed in gaming (or the world) since its release? Here is the fairest review a gamer can give to a game he once loved, but hasn't seen in over a decade.

The graphics are a wash, so I'm not even going to touch on those. I mean, obviously they don't even stand up to the graphics of recent handheld releases, especially since there are hardly any character models at all, and everyone is just a re-colored jersey away from being decipherable. The controls are equally simple, but a whole lot more effective. There are three actions that can be mapped to any of the six buttons you want. A turbo button, a pass button (that attacks the opponent on defense), and a shoot button (that makes the character jump when without the ball). In a two-on-two basketball game, that's all you'd really be able to do, so you can't ask for much more than a spin move or crossover here. The characters respond to button presses mid-animation, which is key in the back and forth of a basketball game.

The sound is where this game really shines. The menu music is forgettable at best, but the in-game commentary is some of the most memorable I've ever heard in a game. Fabulous one-liners like "Boom Shakalaka" and "He's on Fire" rain down onto the players as they impress the announcer.

I'm sure everyone who is reading this has their own favorite line from the game, so I'm not going to go through quoting them all — but I will say, "Is it the shoes?" is a question I must ask myself from time to time. The swiping of enemy players' hands, and the cheers of the crowd also intensify the atmosphere of a good match. I really can't say enough for how much I enjoy NBA Jam's sound direction. I'll remember a lot of this stuff forever.

While the gameplay in NBA Jam is simple, and pretty repetitive (like any sports title), there's the unlimited potential of multiplayer that adds depth to the single game mode that comes with the game. You can play with or against friends, and that's where about ninety-six percent of the replay value in this game lies. I didn't have much of a time enjoying the single-player portion, but once I had a few friends over to jam, I remembered why I enjoyed this game in the first place. The ability to play four players on one Super Nintendo is always nice to see, especially since some games don't even support that many players on one console these days.

NBA Jam is far from the perfect experience, but as far as a quick dunk battle, or three-point shootout goes, there's still hardly anything that compares (except future installments of the same series). The cast of players in the game may be a little dated, but no one can tell who they are unless they look at the top of the screen to see the player's name anyway, so who cares? If you still have an iteration of NBA Jam lying around your house, and the means to play it, you should consider giving it a playthrough. It probably misses you, and you know you're dying to hear the announcer scream "Razzle Dazzle!"