Defense Grid: The Awakening on Game and Player 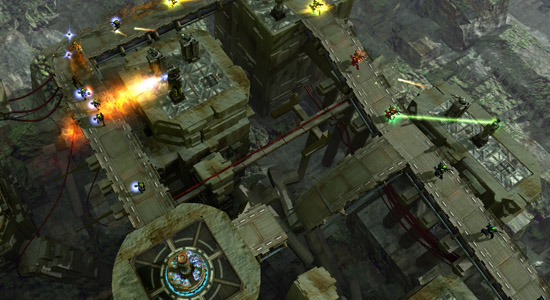 A great new take on a classic formula.

hile it's seen a resurgence of sorts over the last few years, the tower defense genre of video games was practically doomed from the start — 1990's Rampart made quite an impression, but it was quickly overshadowed by more complex real time strategy experiences. But let's be honest: we don't always have the time to lay waste to an entire Zerg outpost or Orc encampment. When you crave a real time experience but your time is at a premium, tower defense games like Hidden Path Entertainment's Defense Grid: The Awakening seem like a perfect fit.

Defense Grid's premise is simple enough: an alien horde is invading your space colony, and it's your job to repel the attack. Aiding you is a disaffected computer AI — in between snide remarks and observations, this assistant educates you on how best to lay out the game's various defensive fortifications. You'll use an array of cannon and laser towers as you prevent the aliens from making off with your precious energy supply — lose your last power core, and it's back to the beginning of the level for you.

While this premise probably makes Defense Grid sound woefully simplistic, the sheer variety of defenses at your disposal makes for a rather meaty strategy experience. Not only will you have to figure out which tower best counters which enemies, you'll also have to discover how the towers complement each other. For example, it would be careless to layer direct fire weapons, since the second row's line of site would be obscured by the towers in front — thoughtful placement of one's defenses is the key to survival.

We need bigger freakin' guns!!!Hordes of alien invaders aren't the only thing working against you in Defense Grid. The game's environments can be challenging in their own right, dictating where towers can be placed as well as the path which aliens are likely to follow. As levels progress, you'll be forced to master the art of using your towers to dictate the enemy's route — by lengthening their journey through the environment, you maximize the time you're able to fire on them (and in turn the amount of damage dealt). All of a sudden, what seemed like a simple strategy game becomes a rather compelling puzzler.

Three separate control schemes are at your disposal: keyboard, mouse, or gamepad. Any of these would be sufficient for navigating the game's simple construction and tower upgrade menus, but the mouse feels the most natural, allowing you to scan environments quickly and effectively. While a mere three upgrade options per tower type may seem a bit shallow to the Starcraft set, it suits this game (and its neatly compartmentalized levels) perfectly.

Hidden Path Entertainment has crafted a rather engrossing and well balanced strategy title. That isn't to say that there aren't a few muddy textures or repetitive sound effects to gripe about, but this is an independent releases after all. Defense Grid highlights just what is possible when a small yet dedicated studio sets out to refine a genre. What we're left with is a fun, addictive and affordable game which is more than capable of filling up that half hour between dinner and heading out for a night on the town.