Afro Samurai on Game and Player 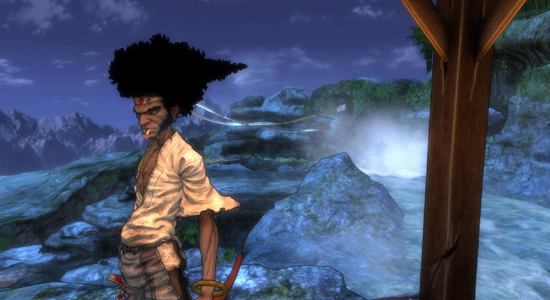 A crimson-slate blend of flash and groove.

od gave Man the beasts, and the beasts gave Man the mule. Hybrid vigor makes a crossbreed smarter and stouter than what begot it, so consider spaghetti westerns in the judgment of Afro Samurai, a manga, an anime — and a video game developed and published by Namco Bandai.

When Italians craned up and over an ocean to look at the American frontier, they saw rugged people, on a desert, in desperate affairs. The Old West? So-so, but Sergio Leone's nameless cowboy became the authentic period figure while Clint Eastwood defined the indifferent hero.

All the way from Japan, Takashi Okazaki listened to hip-hop records in a foreign language and stylized black men; out of his drawings came a vengeful samurai, marked a ronin by heritage and tragedy. An animation house put Okazaki's comic into motion. Samuel L. Jackson lent his voice and spirit for the starring role of Afro.

Rap artist RZA scored the miniseries, his liking for the warrior culture crosswise Okazaki's attraction to RZA's own. Namco Bandai captures the "futuristic yet feudal" world in Afro Samurai with a crimson-slate blend of flash and groove.

Nowadays, even top-tier games greet players with a menu screen. Afro Samurai devotes sixty seconds to a prologue that educates — and unsettles, a camera driving through fields growing bamboo stalks that spurt blood. The story is familiar. Afro's father was a champion, he was challenged and defeated, and his surviving son desires revenge but can only attempt it with contender's standing; and to obtain that, Afro will sacrifice whatever he must.

An action-platforming game, Afro Samurai delivers with smooth and light character movement — mostly. Immediately obvious are camera controls: per Japanese preferences, goodness knows why, the x-axis is inverted and can't be changed, so every object lesson in video-gaming will result in most players turning Afro the wrong way again and again until they finally accept that this samurai steers by rudder.

Focus: concentrate,
fell with one slice.Helpfully, the camera eventually swings behind Afro, and, too, a lot of running is simply from one clash to the next. Combat imitates the stop-start cadence of anime with a charm and rhythm that disguises repetition. Cohorts arrive as if timed to musical phrases — soundtrack direction credited to RZA keeps things in the right mood — and each entrance begins slo-mo procession from midair. Pushing a succession of buttons sends Afro cutting and slicing and kicking, simplistic enough to bore fighting-game mavens but allowing casual players to look good with minimum concentration. A series of combos culminates in a lethal slash.

The left trigger pushes Afro into Focus — color bleeds away from a screen framed by black zoom lines, and a timed strike kills. Tallied combos earn Overfocus, in which time slows: swip-swip-swip, Afro's enemies collapse in ribbons and thirds.

Afro Samurai is outright sanguine, the product of Afro's sword mastery reflecting precisely what the imagination reserves for death by terminal laceration. But then, smiths forge katanas to travel through a man as far and cleanly as possible. Namco depicts violence sincerely, and in case the thought of placation nags, most of those standing in Afro's way are malign and relentless.

Whereas Crystal Dynamics (latter-day Tomb Raider) and Ubisoft (Prince of Persia) have woven gun and swordplay into finely complex platforming, Namco intercalates obscure puzzles at points where players, fresh from a victory, hardly need to be halted and frustrated — especially since powers rarely used beforehand become vital, compelling a hasty flip through the game's manual. Couldn't it all be swordplay? For such a mismatch, Afro Samurai might have been the richer.

The sullen young man goes forth, accompanied — vexed — by Ninja Ninja, a kind of frivolous Obi-Wan Kenobi, an elder if he weren't so irresponsible. Jackson plays a dual role as the half-distracted, bawdy foil to Afro's instinctive obsession and the ornate melodrama consuming the rest of the cast. "She's a killer, you're a killer — well, she's a professional. You're more of a, how do I put this, enthusiastic amateur." Ninja Ninja gets even more irreverent. Language is salty, but who expected Samuel L. Jackson, in a gritty tale of filial revenge and redemption, to leave out the s-word, the b-word, the f-word, or even the m-and-f-word? Moving right along.

Afro Samurai is more game than narrative, and fans of the anime may want more, even to the point of rejecting this adaptation, but the original's intricate plot has been neatly compressed into a traditional arc.

Ninja Ninja: encouraging you to use
the Force, in a manner of speaking.Insofar as Namco is judicious with cutscenes, we seem to watch and hear exactly what we need to know before reentering gameplay; anybody can appreciate that.

Okazaki draped symbolism around his story like lamellar, so even unfamiliar faces and cryptic statements carry meaning. Namco obliges by repeating iconic sequences during loading screens: a girl, innocent, muses about how long bears hold their breath underwater; a dojo classmate, spiteful, laments his misshapen rebirth; and the man who murdered Afro's father, venal, shambles toward the screen against blinding, white light. Transitions are completed when Afro's eyes, in extreme close-up, flick open as Ninja Ninja shouts his name.

Around the time of this game's release, a certain restaurant chain vending a certain type of food expressed interest in promoting Afro Samurai to "the urban youth market." I was told by a onetime urban youth that few of the youths he knows set foot in the advertiser's establishments. His was a reasonable consideration — I got irritated denials or rebukes from elsewhere. No, the tie-in wasn't bigoted, but it was shortsighted. Repaying wrongs toward one's father doesn't require transliteration for color and culture — Afro's sword's grip would fit any hand. An experience as much as entertainment, Afro Samurai came about by disparate impressions of the same thing, first a hodge-podge and then a confluence.