A brainteasing experience for all the family.

t's time for a new star of the puzzle genre to step forward into the spotlight. 2007 saw the release of Portal. 2008 gave us Braid. Both games widely celebrated for their adaptation of traditional design staples, physics and artistic styling. 2009, and Crayon Physics Deluxe, the brainchild of indie developer Petri Purho, looks set to be an early recipient of this years adoration from the gaming community, but does this unique release deserve as much attention as the great titles it succeeds?

Crayon Physics Deluxe introduces itself in disarming style. Presented with the nostalgic vision of yellowed, dog-eared paper, the imaginings of a young child form the visual basis of the game, line drawings made with thick crayons depicting the environment and levels. 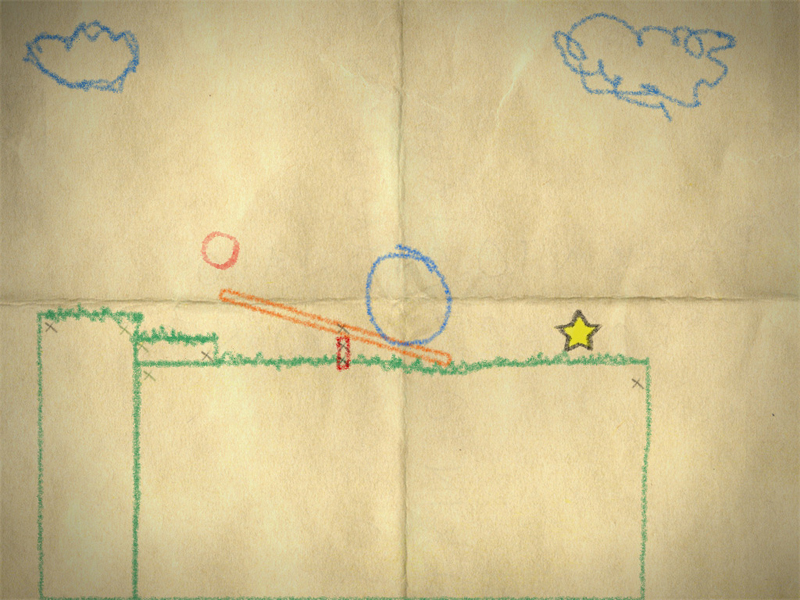 The game starts with the most
rudimentary of challenges.

Your task is to maneuver a small red ball across varying terrain and obstacles to your goal point, a shining gold star. Your mouse cursor becomes a crayon, and to successfully traverse the level, you will need to draw your way to the end.

Naturally, the game starts with the most rudimentary of challenges. Drawing a horizontal line, watching it fall into place, then pushing the ball will achieve completion. In fact, many of the game's stages can be completed in a basic fashion, with simple rampways and blocks propelling the ball to its goal with relative ease. I found my early progression into the seventy-something levels to be fast, untroubled for the most part, which eventually lead to concern for the apparent lack of challenge and depth.

Aside from the visual charm, something was missing in terms of engagement. Portal relied on characterization, Braid relied on its artful nature, with both serving as an early hook to keep the player involved beyond the puzzle solving itself.

The simple line can become a complex system of levers, swings and trap doors, as extravagant as the player's imagination allows. If it doesn't work, the ball simply resets to its original position. No failure message, no game over screen. A swift right click on any created object returns the level to a blank slate, or in this case, a fresh page. No pressure, no panic. Levels can become a series of experimental doodles, and when combined with the believable physics of the drawn object, creates a freeform method of creative puzzle solving.

Reminiscent of LittleBigPlanet, deftly boiled down to the simple action of drawing on a piece of paper. It is possible to overload the physics engine beyond its capacity, forcing a restart of the level, but this took a deliberate effort and should not occur during normal, or even the more deranged moments of gameplay.

Each level of Crayon Physics Deluxe has a solution rating system, awarding the player for finishing the required task in different ways. Performing certain moves such as applying direct force to the ball will result in failure to meet the special conditions, but using a physics object such as a larger ball, or a swinging block to give momentum is encouraged. The rating system is in no way enforced, meaning younger players can enjoy the title on its very basic level of operation, but allows an extra element of challenge and style for the more dedicated puzzle gamer. A solution doesn't even need to work particularly well, as enjoyment can be gained from watching the physics play out, with the near-miss results often providing a feeling of reward for your more abstract efforts.

The full game includes a simple yet effective level editor, a nice extra for those wishing to take the creative aspect of the game further, with the ability to upload created content to the game's website. This is a big bonus, as the relatively short completion time and distinct lack of a defined difficulty level could leave some players looking for more. 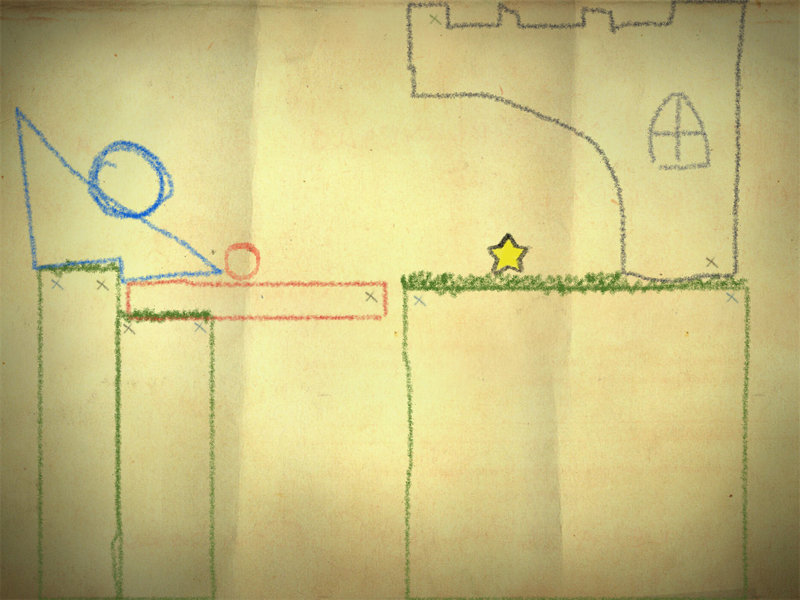 For players looking for
a genuine sandbox-style game.Those in need of a focused and structured experience may be disappointed, but players looking for a genuine sandbox-style game will find enough enjoyment to warrant a purchase. A demo is available for those who understandably need to test this distinctly niche title before they commit to a purchase.

While certainly not for everyone, it provides the perfect change of pace to the blockbuster-laden holiday season, and a great way to ease into the new gaming calendar. It is not particularly difficult or long lasting, but the game will reward those who take time to play with the convincing physics engine and attempt to create more than just the quickest answer they can find. This potential sleeper hit will undoubtedly continue to garner high praise, but may not have the lifespan to keep puzzle addicts away from the likes of Peggle for very long.

Replacing our standard arsenal of cannons for Crayola, Crayon Physics Deluxe delivers a nostalgic and brainteasing experience suitable for all the family. Its endearing visual style, elegant score, and excellent physics make this a download to be given the strongest consideration. Without restricting players with the traditional pressures of the puzzle genre, this is a game whose simplicity allows for the most extravagant ideas to come from the players themselves.