It does everything it can to live up to the Square Enix brand.

any gamers have experienced a Square Enix (formerly Squaresoft and Enix) RPG in their journey through virtual worlds. Series like Final Fantasy, Dragon Quest, and Kingdom Hearts have reached nearly every major platform ever released in the United States. They are well known for their epic stories, and great character development, and Chrono Trigger does everything it can to live up to the Square Enix brand.

At first Chrono Trigger may feel like another early Final Fantasy game ported over to the DS (see: FF III/IV), but upon entering combat for the first time, a clear distinction in gameplay is made. While the Final Fantasy saga deals with a turn based combat system, the fighting in Chrono Trigger finds itself somewhere between an action RPG (Kingdom Hearts/Mass Effect) and a turn-based one. Instead of all the combatants standing in a set place, the enemies in Chrono Trigger move around during battle, which makes attack strategy a lot more timing-based. For instance, a player could use a tech on multiple enemies if they're close enough together, but any hesitation could lead to the enemies moving out of range of one another. This difference is major, and opens a lot of doors to gamers who don't enjoy methodic pace of Final Fantasy's battles. 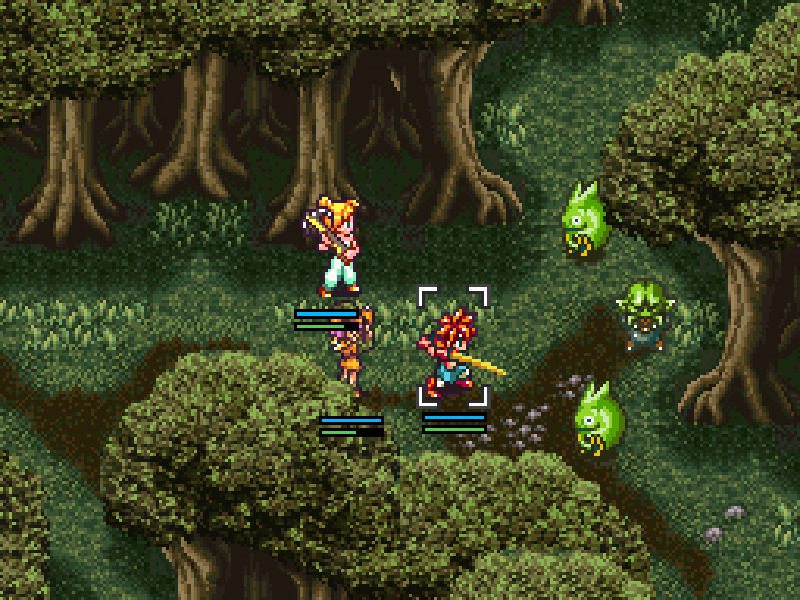 Like Final Fantasy, but adds
its own flavor to the mix.

Chrono Trigger's gameplay features some similarities to the Final Fantasy games, but also adds its own flavor to the mix. There's an item in Chrono Trigger that does everything that Final Fantasy's "tent," item does, but is known here as "shelter." Kind of like how the Europeans call a "Quarter Pounder with cheese" a "Royale with cheese." One minor difference that adds to the interactivity of the non-battling environments are the staircases in the corridors of buildings. In the Final Fantasy series there are usually just black corridors that act as portals to whatever room you're heading to. In Chrono Cross you enter a corridor, and then move left or right to decide which stairs you'll be heading up or down. As someone who has played numerous two-dimensional RPGs, I appreciated this addition. Square Enix also has some interesting mini-games, like joining group dance parties, to get the players more in tune with the world they found themselves in.

The story in Chrono Trigger is everything a Back to the Future fan wants in his portable RPG. If you've ever been interested in the space-time continuum, or just time travel in general, this story will keep you busy for days. There's a lot of the usual RPG nonsense, like princesses, and castles, but it's all presented in a future-meets-past kind of way. Original as far as these eyes can tell. The characters are as wide-eyed and funny-named (depending on the player in this case), as any cartoonish look at adolescent adventures, and I guess that bothers me a bit. The art direction of this game doesn't stand out in any way from other games by Square Enix. Perhaps I'm jaded from years of leveling up in the same forest environments, but I couldn't pick too many characters from this game out of a line up if I had to.

The Stylus controls for this DS port are a bit clunk-tastic, or just useless, if you prefer actual English terms. I can see why someone would want to move around with the use of the touch screen, but the fact that I have to touch a face button to interact with everything kills it for me. If the touchscreen allowed players to tap on other characters for discussions, or to open treasure chests, I'd be all for it, but in this case it's primarily just to walk. Also, can't we take the save slots up a couple? Three slots to save are not enough for someone who shares games with their family, and also enjoys experimenting on his characters throughout a game. I know three slots is the going rate for games since on-cart-saving was invented, but I could use a couple more next time. 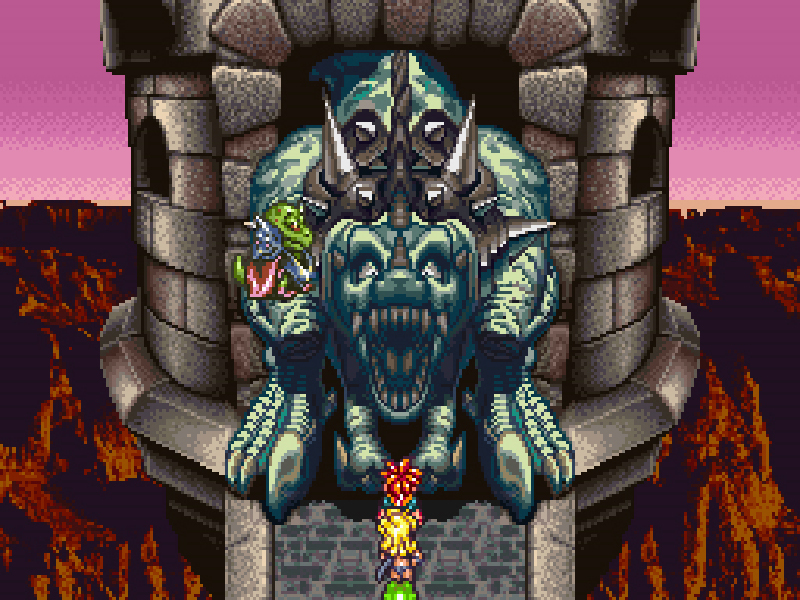 Does it live up to the hype?Square Enix has risen to the occasion once again with the soundtrack for Chrono Trigger. Composed by Yasunori Mitsuda, who has worked on Xenogears, Mario Party, and the Shadow Hearts series, this game provides another classic MIDI soundtrack. The depth in each of this game's songs are beyond what could be expected, and sometimes disappoint you when they end because you moved on to a different area. There's no better praise for a video game composer than going back to a certain area of a game just to hear a piece of music, which I found myself doing on numerous occasions during Chrono Trigger. One of my favorites being the piece played inside the Manolia Cathedral. Yasunori Mitsuda also does the soundtrack for Chrono Trigger's sequel, Chrono Cross, which is another reason I must track down that game.

Chrono Trigger is one of those games that has been talked up to almost mythical standards by people who played it on the Super Nintendo Entertainment System, and while it's a solid RPG, I don't know that it lives up to a lot of the hype I've heard. If you already own this one, and are just looking for another playthrough, I say stick to the original because of the weak stylus controls. Anyone who has been waiting anxiously for their chance to live out their friends' old stories, or just need an RPG for the bus ride home, should go grab this one before it becomes as rare as the original. Chrono Trigger doesn't reinvent the wheel in gameplay, art, or even music in the RPG genre, but it does execute at a high level in each category.

It may be a bit late to mention this, but you can use the touchscreen to talk to people and open chests, etc. You just have to tap on the map or another blank area.