Done out of a love for fun.

t has been said — with authority, and in apocrypha — that rock musicians seldom listen to their own albums. Could be. Some performers believe that they belong onstage and strictly view recording as the commercial staple it was until a decade ago; or else wildfire lifestyles place studio sessions in the same transience as fashion, parties and lovers. But craftsmen understand contempt bred in familiarity, as well as nearsightedness from working closely day after day — so the same may be said of video game developers. 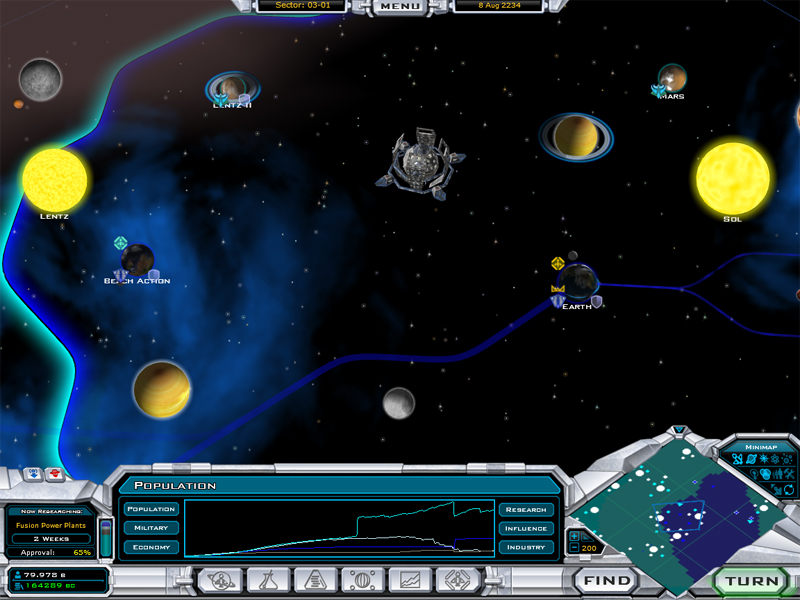 Carve out your
corner of the galaxy.

Not all developers, certainly. Bungie Studios publicizes an interest in its properties far deeper than formal playtesting; and executives of companies from Nintendo to Valve Corporation admit, in interviews, how badly friends beat them at their own games. And I can think of no group more humbly devoted to work, or transparent in its review and correction, than the designers at Stardock Corporation. Stardock's Galactic Civilizations II: Dread Lords, released three years ago and snugly fitted with two expansion packs (Dark Avatar, Twilight of the Arnor), received its Version 2.0 patch last month, with two incremental revisions since — each changelog evincing as much affection for the product as have customers.

The Galactic Civilizations series bears responsibility for precluding any personal interest of mine in playing another single-player, turn-based strategy game of the explore-expand-exploit-exterminate (4X) genre. It began on OS/2 and was remade in 2003, a title which I purchased and played for many hours on many Saturdays. A Galactic Civilizations game's objective is, manifestly enough, dominion of the stars.

A player's means toward that end, and obstacles interposed, vary widely. Stardock so scrupulously balanced customization, victory paths and dynamic — clever, even cunning — artificial intelligence of computer-controlled opponents with the galactic playing field's size and characteristics, that one change effects a succession of consequences.

Replayability, a metric applied to many games, distinguishes Galactic Civilizations and its resemblant sequel as a franchise sui generis. Dubious? Rummage through the archives of Stardock CEO Brad Wardell (filed under Wardell's moniker "Frogboy") playing the game and reporting, in the short view, how well his interstellar autarchy is shaping up; and in the long view, if he and the development team have realized the game as intended.

Wardell enjoys himself sincerely but at the same time accomplishes a masterstroke in advertising. His civilization's adversaries, Stardock's creations, surprise him. They may accost a player, or subtly undermine his rule, or remain insouciant and benign the whole game. An allowance of as many as nine large sovereignties and eight small ones invites a collision of wills, hectic and sanguine like the Sengoku period in feudal Japan. The emergence is only faintly choreographed. The adversaries surprise him, they impress you and tempt you to buy Wardell's game. 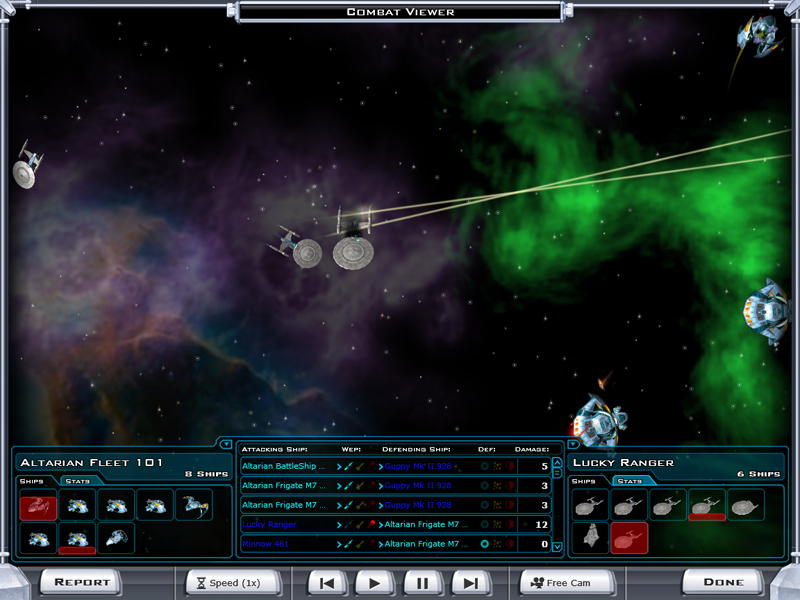 Last Stand: They shall
never take Planet Beach Action!Version 2.0 improves the features retaining the interest of both CEO and customer today: selective complication. Diplomacy and planetary administration can be executed crisply or deliberately; each turn may take five minutes or thirty seconds. A player chooses to spend hours perfecting the look of his fleet or, like me, might import a user mod that furnishes every ship with a saucer-shaped forecastle commissioned for the United Federation of Planets — then fix armaments and dispatch with orders to bring war to the alien heathen. Accompanying changes to gameplay are graphical efforts to, in Wardell's words, "future-proof" Galactic Civilizations II. The game was never majestic, though no 4X game should be; and Stardock's choices for interfaces are articulate and soothing to the eye. Finally, little frustrations have been rectified.

One matter still outstanding is the game's copy — menu directives, item and object descriptions, dialog. Stardock meant it to be lighthearted but it's amateurish, swerving here and there into ungrammatical and god-awful. A few years ago, Wardell posted a historical account of his fictional universe to the official Galactic Civilizations forum, and I — charmingly! artfully! not at all abrasively! — chided Wardell and his company to hire a professional writer. My overtures — mellifluous! persuasive! — did not move Stardock, and the inconsistency in quality remains.

All right, would I trade a well-written game for an impersonal developer? I would not. Stardock is the corporation championing a gamer's bill of rights, known for eschewing laborious copy protection and permitting its CEO to disclose to several thousand readers that he spent hours planning his ascension to galactic overlord, only to be sociopolitically sucker-punched by space-bugs. Following a duration in which many developers would have twice obsoleted a game, Stardock has tried, much out of a love for fun, to make Galactic Civilizations timeless.