Elements on Game and Player Constructive relaxation is a good investment.

good puzzler conforms to this golden mean: difficult enough to intrigue, never to vex. Too easy, and the game isn't worth trying. Should it necessitate compulsive early-morning travails, multiple Ph.D.s or repeated use of a swear-box, the game isn't worth finishing. In Elements, developer and publisher MumboJumbo looks to have made one that will be spared a quick uninstall for either shortcoming. 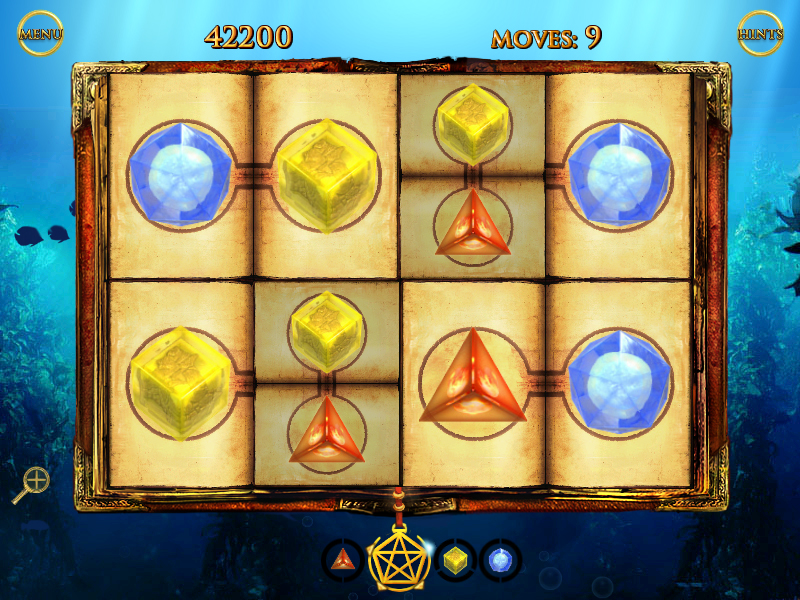 Excavation, so goes the game's story, revealed a Renaissance study belonging to Luca Pacioli, the Franciscan friar, and friend and colleague of Leonardo da Vinci. Corresponding with the Florentine genius, Pacioli pursued an alchemical combination of Platonic elements — earth, air, water and fire — he believed would create "the elixir of life." Pacioli's failure inferred by the monk's unfinished treatise, the player assumes a role of scientist-historian, following Pacioli's instructions to refine natural forces and reveal a definitive, unknown power.

The playing field is an old leatherbound and gilt book, opened and bifurcated — by page, then half-page, then a quarter and an eighth, and so on. In each space is a selected element's colored icon. Earth is a yellow cube; fire a red tetrahedron, air a white octahedron, water a blue isocahedron; they glow, pulsate, twirl, jiggle. For every pair, there is a circumferential marker at the bottom of the screen. To score, a player swaps two elements so that like elements face diametrically — the matched pair combines into a larger, single icon and rotate ninety degrees. Completing every possible match advances the player to another level.

Easy enough. Ah, but normally only elements of the same size can be paired, and pages are sometimes filled with odd numbers of icons. Combinations, then — double pairings, identified by a smaller element perpendicular to a larger relative — produce elements that can be transposed with another of any size. And triple pairings yield a jellied opal that will actually combine with any other element. Ah, but every four levels, stages introduce a new element. Elements is forgiving of a player who runs out of icons without pairing them all: the field expands, obligating the player to match only the elements he hasn't yet managed to.

By the time a player reaches a level at which the book has been divided, subdivided and subdivided again — filled with ten separate elements, some of them requiring a dozen pairings — patterns are visible and techniques will probably have been developed to exploit them. Whereas I spent my first session staring dumbly at the screen, trying to will a little arithmetic comprehension, I could — juggling those many elements — maintain a rhythm of matching, setting off combinations, and devising sequences to make unlikely pairs. Even such a plain reward as animated fireworks and a triumphant orchestral motive lifted me when I thought I had pulled something clever off. 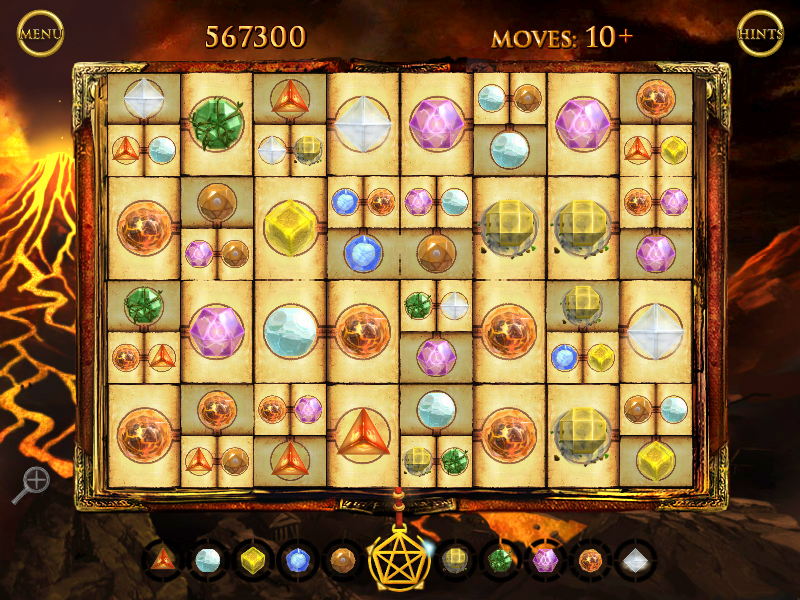 . . .Before it gets
very, very interesting.Elements' visuals are typical for an independently produced PC game — acceptable, in some spots artful. The game's score, however, is extraordinary. New age ambient reflecting the character of each class of element, be it fiery, wet or evanescent, these half-dozen tracks surpass the electronica of, say, Mass Effect's — open and meditative where I recently found the music of BioWare's A-list title aimless and repetitive. Opinions aside, the experience of Elements is one both anodyne and complete.

Two problems conspire to lessen the game's appeal. First, hints are offered regularly — in fact, unstoppably. Players will be able to ignore slowly flashing elemental pairs as play becomes more complicated, but really shouldn't have to try. Nor is the advice, beyond a certain level, sound. The computer offers shortsighted solutions, preventing tidily completed fields. Second, a downloadable copy of Elements retails for $20, unattractive in a market where Xbox Live sells more substantial games for less.

Then again, how many Live Arcade games does each of us play daily, weekly or even monthly? Constructive relaxation is an investment. For the weakness to puzzle games rightly billed as addictive — storyline play, timed play and easygoing play make Elements about right.