The Experiment on Game and Player nder the slogan "Surveillez, epiez, controlez," French developer Lexis Numerique released Experience 112 in Europe this past September. The Adventure Company, a Canadian publisher, has brought the game to North America as The Experiment with hardly a whisper to the press or gaming populace. That may have been a consequence of limitation, or else intentionally hands-off, as epidemic publicity is what The Experiment deserves.

The player? You are — unidentified. A fast-moving aerial shot rushes across the shallow water of a tropical archipelago, and into a derelict tanker run aground, before the screen changes to that for a kind of mainframe. On a desktop background — navy blue, an official seal in the center — are several windows. In one is a map; a second depicts a control pad; and a third shows the feed from a security camera fixed on a woman who, wearing a scaled and buckled medical gown, lies asleep on a bunk. 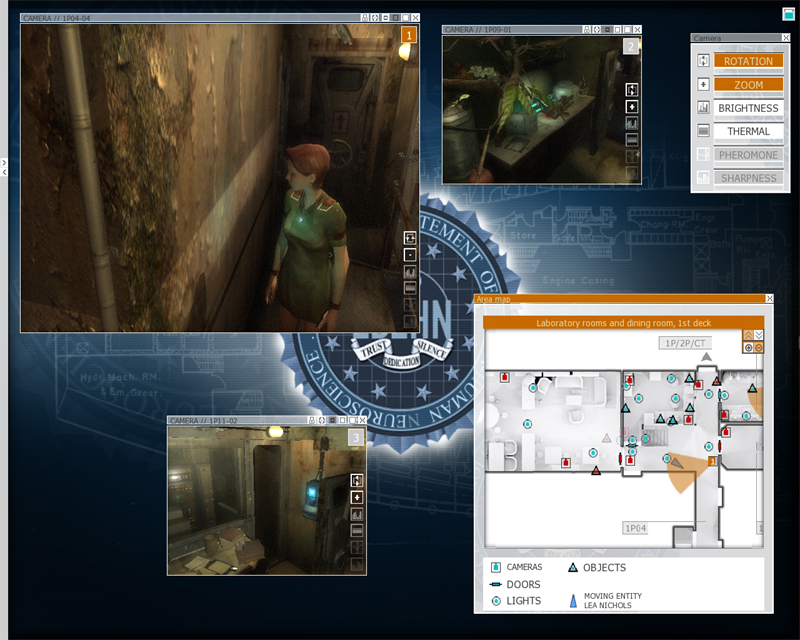 Jostled awake, the woman rises, stumbles forward, then finally stands — is someone there? — to address the security camera. Turbid at first, she soon collects herself and begins to instruct you. Her name is Dr. Lea Nichols and she is part of a scientific project called EDEHN. She confesses amnesia, doesn't know why the ship is ruined and, in the same breath, announces that she will tell you only what she thinks you need to know.

The tanker's electrical system still works, and the decks are filled with accessible security cameras. Nichols asks you to accompany her, directing her movements by turning corridor and cabin lights into makeshift Aldis lamps — flick one via the map window, and she will move to its location, investigating anything of interest nearby. You, able to surveil across the ship through up to three camera feeds at a time, will serve as the doctor's second sets of eyes and ears. 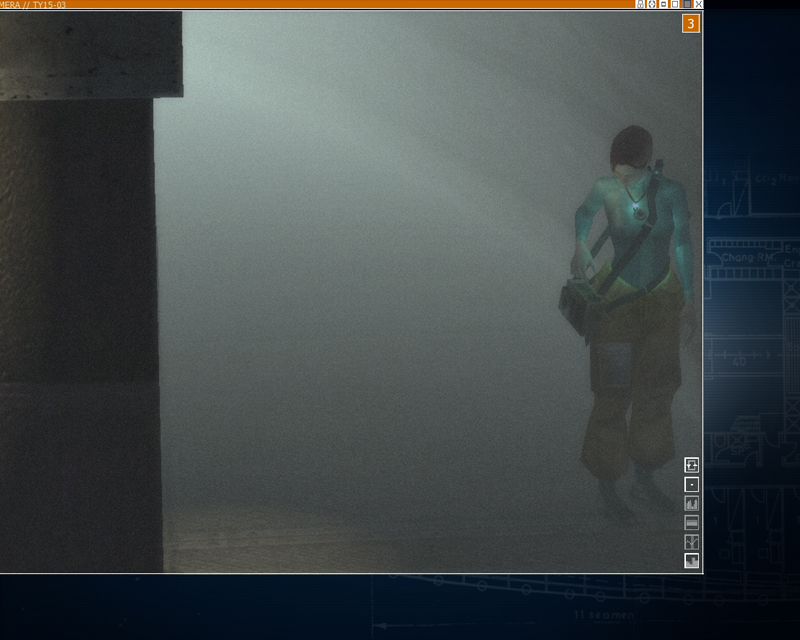 Drawing on familiar sources
of fiction, The Experiment
has its own twist.Such a creative interface results in two peculiar suspensions. First, not once during gameplay is a camera vantage larger than three-fifths of the screen — you are at a visible disjuncture with Nichols' world, and yet the lifelike cause and effect causes the windows to be easily forgotten. Second, although the doctor follows your lighted path, and relies on you to surmount obstacles both frustrating and dangerous, she is in command. Her character — confident, directive, clinical — provides just the right motive for tutoring you in use of cameras, lights, switches, doors and other devices. At times, Nichols is headstrong — moving ahead without you, only to double back when she understands why she was taken somewhere in particular. An inconvenience on its face, the behavior instead comes across naturally and strengthens the bond between driven scientist and hidden abettor.

The interface, Lexis Numerique's gamble, occasionally frustrates. On the assumption that players would want or need two or three viewpoints, the developers designed additional windows to open whenever a camera is activated in addition to one or two already live. In fact, only a couple of areas benefit from multiple observation points — the game can be completed with a single window. As a result, unwanted windows pop up, slowing frame rate. Text windows can neither be resized nor placed beyond the screen's edge. In at least one instance, essential information was cut off. Finally, the game's text and dialogue are littered with extant French — when one is the pilote of a submarine, or Dr. Nichols shouts Catastrophe! in a tense moment, the incomplete work of translators is, if charmingly, plain. But those are minor impediments to the heart of gameplay.

Exploration in The Experiment introduces and supplements the game's many, many puzzles. The advanced computer system controlling cameras and lights is also a store of data vital to Nichols' drive. It has information on EDEHN and those men and women assigned to the mission — the more important the record, the more confidential and secure. But all was not well between EDEHN personnel, and that covetous distrust serves your investigation. Most game-time will be spent searching, sleuthing, cross-referencing; employing cryptography, cracking codes, operating critical machinery and even solving a few problems with well-placed common sense. The combination and placement of riddles and hazards are delicate. Play is dynamic and robust; long and in certain places difficult, but never tiresome. There doesn't appear to be a mistake lethal to Nichols, yet suspense is ever-present — manifestly so, because The Experiment portrays a believable, stunning world. 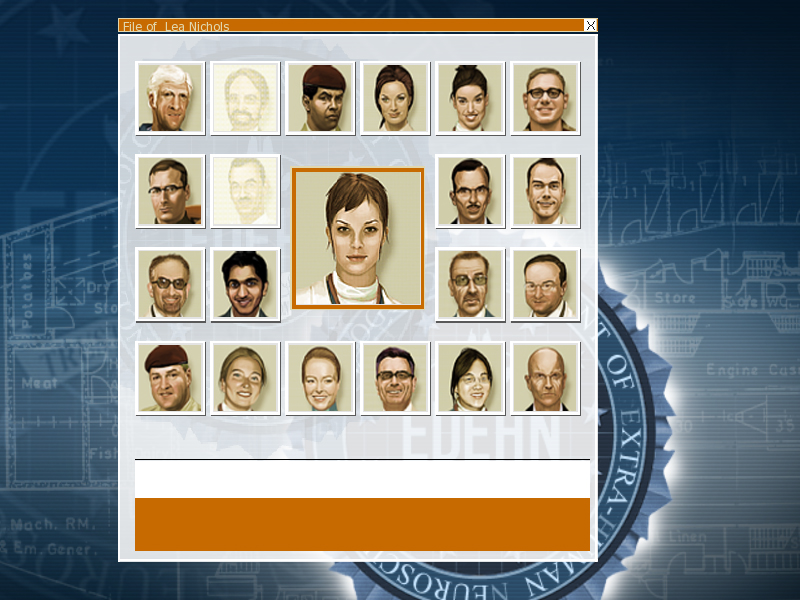 The "collaborators" of EDEHN.
Each one a specialty, a station,
a loyalty — a secret.Lexis Numerique set the scene of its game impeccably — The Experiment is, graphically, precisely what one would expect, its nearness to the cutting edge well beside the point. Dr. Nichols' environment is appropriately lush or gritty; soft or lapidary, depending; and in the painstaking detail of a novelist's, believable. Ambient sounds — eerie, ethereal — reflect the time spent refining them. And interruptions, by electronic music with the exotic touch of The Last Temptation of Christ, come apropos when Nichols rounds a new corner.

Passing game hours reveal the plot's strength and eloquence, its characters compelling in the disclosure of their conflict. EDEHN's collective genius and vision bore hubris and indulgence. The story is told through flashbacks — those of the doctor's, revealed as cutscenes — as well as the private writings of Nichols' colleagues. As the discoveries you and the doctor make afford deeper access to secret files, alignments and partnerships become clear — typical, shocking, sordid, amusing, treacherous, tragic. Lea Nichols, herself phlegmatic, is not exactly endearing, but from the curiosity you share with her — you, as both a player and an unseen actor — emerges sympathy and investment in the doctor's strange, astounding quest.

Some ten or so hours after the opening sequence, a sense of dramatic permanence accompanies the fade to black — a few hours after that, a replay intended to uncover more of EDEHN's mysteries seems reasonable. This is a game for which one might rationalize purchasing a PC. In it can be seen the influence of Alfred Hitchcock, Michael Crichton, H.P. Lovecraft and Arthur C. Clarke. The Experiment is fine art, a sci-fi techno-thriller with a glint of misbegotten romance: leading with picture-perfect exposition, leveling challenges and wonders through a novel use of perspective, then ending in a model of poignance and economy. Lexis Numerique, bravo.