Sins of a Solar Empire on Game and Player Sins of a Solar Empire

eal-time strategy is a term of art, firmly so since South Korea began scoring its Starcraft champions in keystrokes-per-minute. Making swift use of what's at hand defines tactics, not strategy. To strategize means devising plans for long-term, large-scale objectives, and grandeur doesn't come in twelve minutes. The two-game Homeworld series stands out as a graceful match of deliberative fleet command and the bigness of space. But its play was strictly linear, mistakes made in the first few missions often irremediable later on, and Homeworld's sci-fi milieu — starring the Kushans, those drowsy, laconic nomads — was an acquired taste.

Galactic RTS finds a different expression in Ironclad Games' Sins of a Solar Empire — released by the developer and publisher for whom strategy titles are a lasting contribution, Stardock Corporation. With economic and diplomatic controls, fit for turn-based play, enhancing the immediacy of real-time combat and maneuvers, Sins of a Solar Empire is a hybrid worth at least the acknowledgment of experimentation. 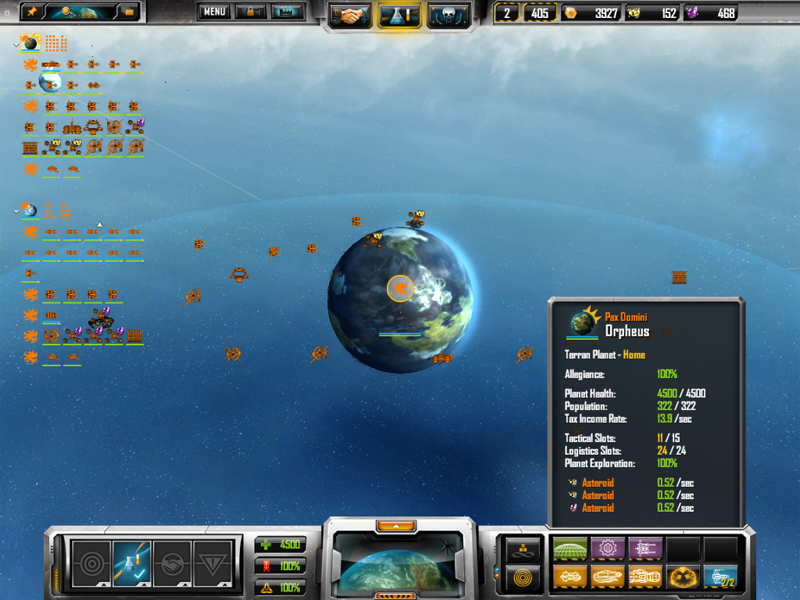 The "Empire Tree" makes
managing your parsecs a breeze.

Similarities to Homeworld, if evident at first, remain superficial. Sins is utilitarian; dramatics go only as far as its name. There is no storyline campaign: as soon as a brief, theatrical opening sequence has ended, Sins presents a menu for customizing single-player and multiplayer games. In this, its intended emphasis — and Stardock's influence — shows. The variety of play and house rules are exponential and wisely arranged — new or easygoing players can quickly start a game, while fastidious ones may adjust dozens of parameters and even create their own maps. The most meaningful feature is a slider controlling the speed of play, benefiting those who prefer real-time strategy games that encourage complex management rather than expediency.

Sins is a competition to establish empires, so space is organized into geocentric and heliocentric discs set on a single plane. The network of these "gravity wells" is irregular. Some territories connect to several others, some only one, inviting considerations of expansion and the defense of outlying possessions. Players collect and trade natural resources; and, like a typical RTS, develop assets and infrastructure to support a spaceborne military. The game's three playable races — mercantile humans, telekinetic irredentists and hideous aliens on the run from a nameless scourge — respectively appeal to conservative, research-driven and aggressive styles of play.

Ironclad delivers on its claim that although players master Sins with difficulty, they learn it easily. The game's four sequential tutorials bring a complex interface and four administrative dimensions — diplomacy, economics and warfare — into focus. The many advancements, upgrades and starship models are summarized in popup windows, allowing players to quickly choose whatever circumstances require without pausing to flip through the manual. Alerts and contingent gameplay elements draw the eye, helping to prevent confusion over the maintenance of sprawling territories; or even an orphaned scout ship here and there. It's deep strategy that accommodates casual gamers. 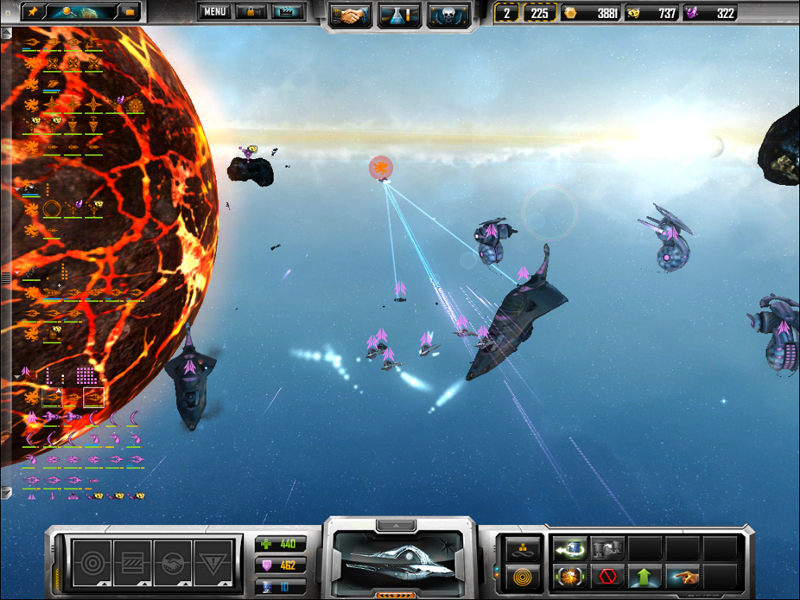 Last stands would be moving
if we knew more about the conflict.Weak presentation, however, results in an unremarkable experience. Graphics would have been acceptable for a technically inclined game — but Ironclad and Stardock wanted real-time strategy for Sins of a Solar Empire. Next to giants such as Blizzard Entertainment, they contended with standards that went unmet. There is the unit dialogue, cheaply produced, inspiring little else but a desire to turn it off; then the musical score, ranging from average to amateurish and, worse, oddly and inexcusably over-compressed; and then the sound effects, condemned by the realization that Homeworld's weren't much worse in 1999.

Most disappointing, and ironic, is the divorce between a colorful plot and inventive gameplay. The title is a hook; the back-story is smart, pulp sci-fi. Players may select from sets of portraits of the three races — well-executed, grotesque stuff — and load screens display concept art further illustrating Ironclad's fictional universe. The culmination should have been the first chapter of a saga. But none of it effectively complements the RTS. The resulting obscurity detracts therefrom. Instead of a rich, enigmatic franchise, Sins struggles with what appears to be a lead programmer and art director who at some point in development were no longer on speaking terms. Still, this is Stardock: what about a second try?

The main problem with these games is that the STUPID overuse of 40,000 different controls. The original Homeworld had a lead programmer that held the pulse of Sci-Fi and the practicality of first person shooter. All subsequent editions are in a word Garbage. Sins being the newest space based edition sucks right along side of them, Why not just make another Empires of earth sims game!!!! And any articles giving Sins redeeming qualities are being paid off. Are you this type?
]

Hello, I'm new to the forum turned up here to aspire help and your orderly hearts.

Sins of a Solar Empire