Metal Slug 3 on Game and Player Its classic arcade stylings are its biggest pitfall.

or nearly fifteen years, console manufacturers seemed to have but one goal — to bring the arcade experience into the home. Atari, Nintendo and Sega performed admirably at simulating the stand-ups of the eighties and early nineties, but only one company managed to (quite literally) bring the arcade to consumers. SNK's Neo Geo played a number of arcade greats, from King of Fighters and Samurai Showdown to more obscure platformers like Magician Lord. One SNK side-scroller became particularly popular: Metal Slug. Earlier this month, Metal Slug 3 was released as a downloadable title on the Xbox Live Arcade. Although it holds up remarkably well, it does beg the question: is there a place for short arcade experiences in the age of the fifty-hour epic game? 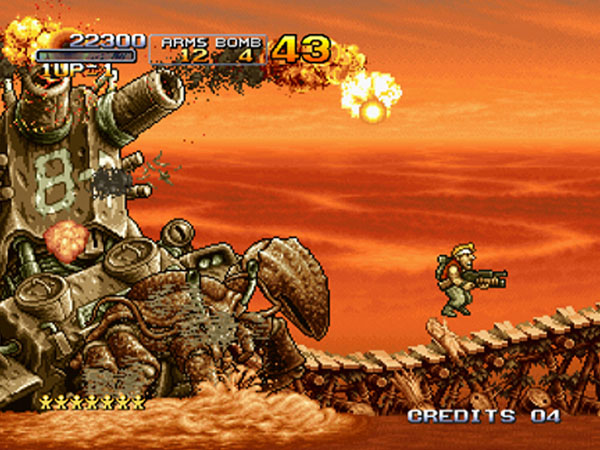 Crab + tank = problem.First released for the arcade and Neo Geo home users in 2000, Metal Slug 3 continued a series of side-scrolling shoot 'em ups that's so appreciated not just for its polish, but for its irreverence. At every turn, the Metal Slug games seem to poke fun at the likes of Contra or Rush'n Attack. In Metal Slug 3, for instance, one's character will become morbidly obese if they consume too many health power-ups. There's also a monkey sidekick, zombies and alien invaders aplenty. In short, oodles of fun. Like so many other Rambo-inspired war games, rescuing POWs is a key part of the Metal Slug 3 experience. Making it to the the end of a level with a high rescue count will equal huge bonuses. A number of interesting play mechanics will see you through each of the game's environments – vehicles can be acquired, and your own character can be transformed by a zombie-like mutation that grants you a rather disgusting special attack (let's just say it involves projectile vomiting). 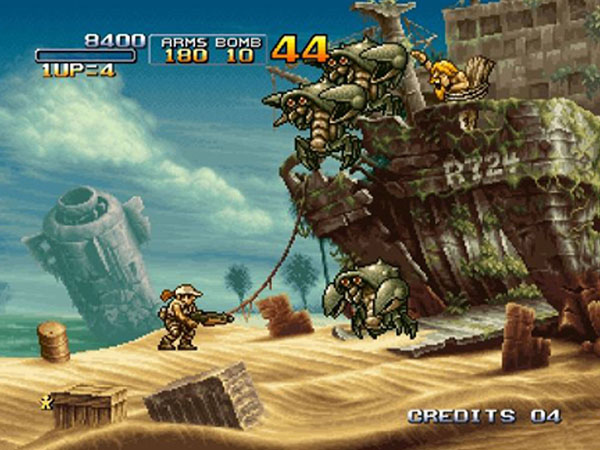 Did I mention you fight crabs?Metal Slug 3 controls simply enough. Eight directions of movement are detected by the Xbox 360 controller's analog stick, and three face buttons control everything else (shoot, jump and bomb). This is the sort of game that you'll likely tear through in a half-hour (just as you would have in the arcade), but it does offer enough alternate paths and unlockable items to keep you going back for at least a few hours more. Metal Slug 3's hand-drawn sprites never cease to impress, and this Xbox 360 port both looks and sounds incredible.

Still, Metal Slug 3's arcade roots cannot be denied. This game is short, consisting of only four levels. Many of these are branching and new secrets can be unlocked on subsequent playthroughs, but I'm doubtful that alone will be enough to convince most gamers to plunk down $10. Ironic, really, considering the original game cartridge for the Neo Geo probably cost upwards of $200 new. Metal Slug 3 is a game at the pinnacle of its genre. However, that genre has all but slipped away in favor of immersive 3-D worlds and 100+ hour RPGs. If you've ever wondered where the designers of modern 2-D greats like Alien Hominid and Viewtiful Joe got their inspiration, look no further. Sure, $10 is a lot to ask for a half-hour's worth of entertainment, but such is the way of the arcade.