Halo 3: Campaign on Game and Player Back to "thirty seconds of fun."

fter Halo: Combat Evolved won paradigmatic success in 2001 for the first-person shooter genre, developer Bungie Studios and publisher Microsoft, it could have been classified as a stable element. The game might be enhanced but never, if to be left intact, effectively modified. Its basics were inseparable: elegant controls for a protagonist in an environment with grandeur and tactility; a varied, eccentric, exotic and intelligent enemy; and, while no requirement of shooters six years ago, a scored storyline made of a rough aggregate of the ten or so most influential works in science fiction.

What parts of Halo weren't novel were stylish. And, too, commanding. Bungie has acknowledged having learned from criticism of Combat Evolved's sequel. Halo 2 was itself unique, having introduced the "party system" and "matchmaking" to multiplayer, allowing friends to compete in an uninterrupted session against teams of comparable skill. But consumers and reviewers judged the title on its single-player game — and rigorously, the travails of cyborg Master Chief and AI-entity Cortana singularly attracting millions of players. 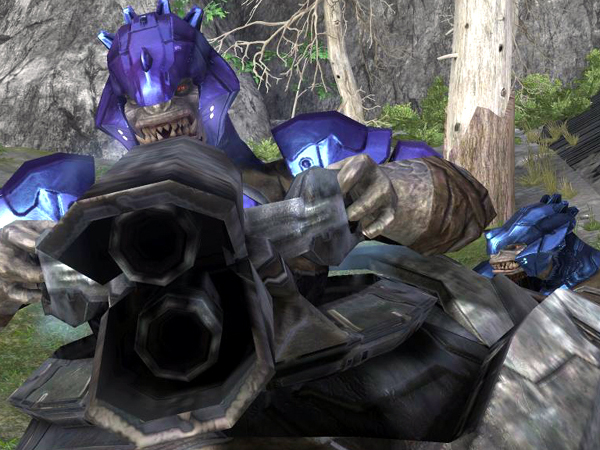 Earth's enemies — evil, vicious, plain ugly
— give you every reason to take them on.

Superficially, Halo 2 appeared to be a refinement of its predecessor. Every convention was present, from an urgent starside defense to a ride in the armed Warthog jeep and Scorpion tank, before the succumbing of foe and ally alike to the onslaught of the parasitic Flood. New conventions — dual-wielding small arms, use of the energy sword and overpowering vehicle pilots — were established. However, due to lack of time between releases (which Bungie confirmed) and perhaps innovation (which Bungie has, on specific counts, admitted) the form of developer Jaime Griesemer's "thirty seconds of fun" — the denominational essence of a game which, from thirty seconds, a developer can "pretty much stretch that out to be an entire game" — was merely copied.

Disappointment was most acute, for many including myself, by way of unavoidable comparisons between Halo 2 and the gameplay trailer featured at the 2003 Electronic Entertainment Expo. The demonstration retained Combat Evolved's economy of narrative — first-person, man-versus-monster — and was as grave and gritty, Master Chief relieving a division having suffered heavy casualties while still en route. Memorably, the urban-combat sequence interleaved player autonomy and incredible, scripted events, purporting a sense of freedom of action within events the size of the big screen.

Halo 2 defaulted on the offer of a playable action film. But Halo 3 does not. Of course, it is an imitation of those "thirty seconds," of Combat Evolved, properties of which are clearly fungible. Gameplay is indistinguishable from the penultimate title's. Selection of arms and vehicles is slightly adjusted, and only slightly, while the bestial and martial Elites, no longer Master Chief's collective nemesis, have been supplanted by — the bestial and martial Brutes. Halo 3's plot is philosophical homage to George Lucas' Return of the Jedi: a clever reshuffling of almost all elements present in the first episode. Bungie forwent creativity for certitude in the satisfaction of its market.

Grandness, though, is achieved as was not possible before. Dramatic and mechanical stages are in a reversed order from the two games prior — smaller and busier levels first, open and magnificent levels later. Both Combat Evolved and Halo 2 resolved in a decrescendo and reduction of scale. The first game compensated with an escape from a doomed vessel, not least timed on an impromptu, incendiary obstacle course. Bungie tried, with the second, to mitigate this decline with a startling cliffhanger. Scale increases as Halo 3 progresses; new equipment, materiel and facets of play insinuated throughout.

Wisely, Bungie appraised the worth of a group-oriented cinematic experience and has not only included remote, cooperative play but has expanded it to allow up to four players. Although its characterization is gauche — players two through four are Elites, and those hunched aliens have never been a popular player choice after three years of Halo 2 — cooperative advancement is exciting and, if hectic, unique. 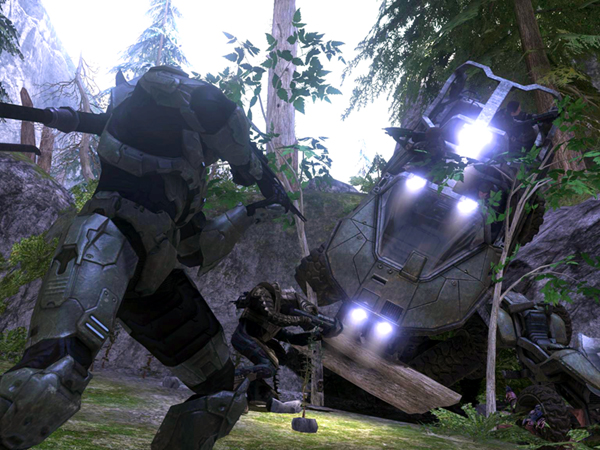 Allies' intelligence: still artificial.Accommodations have been made for four players in assigned and often matching roles. In a fitting coincidence of immensity and group play, Halo 3's translation of the 2003 trailer provides Master Chief's coterie with four ATVs missing only personalized nameplates; a Marine riding on the back of each vehicle with a shoulder-slung bazooka. Bungie must have known it would cause thousands of quartets to whoop at the sight of that contrived for an action film — my four did. Even the game's obligatory, claustrophobic and repetitive incursion on the Flood is at worst shortened by teamwork.

Of minor importance now — hundreds of thousands of players having finished the campaign and now set on playing multiplayer every weekend night for the next few years — but perhaps more in retrospect, is the story arc which ends with Halo 3. It clarifies and even justifies the narrative of the first two games, a poignant and definitive close to an odyssey — not least elevated by a September promotional series that exhibited a war diorama of a decisive battle, accompanied by a solemn performance of Chopin's Prelude for Piano No. 15 in D-Flat Major. It makes one quizzical knowing a strategy game based in the same fantasy world, tentatively called Halo Wars, is in preparation. Halo, profoundly lucrative franchise that it is, has been concluded as eloquently as its designers must have wished when first conceiving it a decade ago. While Halo 3 complements the trilogy it does only principally in narration. Bungie's pinnacle was the original Halo, &#0233clat of the last borne by the first.