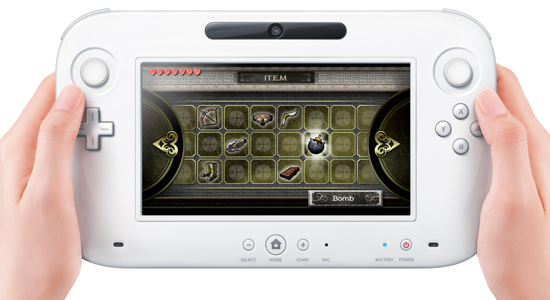 Even if Nintendo was behind, it just took the lead.

udging from the initial reactions over Twitter, excitement and confusion are the two overriding emotions evoked by Nintendo's press conference.

If Nintendo wanted me to believe that it is simply a broadcast relay for the genius bubbling out of the elfin Shigeru Miyamoto's laboratory-atelier, it succeeded. Whereas Microsoft's message was "Never mind the pomp, just buy our games"; and Sony's was "We're Sony"; a triumvirate of Shigeru Miyamoto, Satoru Iwata and Reggie Fils-Aime — last seen trapped inside a 3DS — said "We want to take gaming somewhere new; you're welcome to come along," did it convincingly, and in less than 75 minutes.

Nintendo's insouciance takes the company a long way.Nintendo's insouciance takes the company a long way. Iwata's first monologue, following Miyamoto's ruminating to a pit orchestra's stabs and motives, termed this year's theme "deeper and wider" — but before internet cynics could give bawdy memes any traction, Nintendo had fluttered away to starry-eyed contemplation of "we", "you," the Wii, and the Wii U.

Yes, the Wii U. A product reliant on a fact-sheet is either poorly marketed or obscure enough to elude categorical dismissal. This largish, high-definition, combination tablet-portable-controller fits the second profile: alien at first, but an unmistakable descendant of Nintendo's design ethos. With nearly as much emphasis on the Wii U's performance as its social usefulness, the three executives acknowledged power, one tightly held value of Western consumers; while justifying whimsical altruism, their own.

Minimalism paid off this time around, not least because the other two monoliths flounder in excess. The gaming world, spared distraction by a farrago of titles, celebrities and cant, won't forget what Nintendo unveiled today.

The professionalism, charm, and polish of Nintendo's press conference this year were apparent from the moment the lights dimmed, as we were treated to an orchestral and video montage of Link's quarter-century heritage. Nintendo wasted no time reminding us of the memories it has been responsible for creating, and thanking us for the symbiotic relationship that has let the company thrive even over the last few years of lackluster "hardcore offerings."

Last year's big news was the 3DS, a handheld sendoff to pesky red & blue glasses which gained a tremendous amount of attention for its efficacy at providing a deep visual experience and a slew of big-name titles prepared to support that depth. Today Reggie Fils-Aime picked up where 2010 left off, showcasing gameplay trailers for new and already announced titles alike, enthusiastically (if not convincingly) touting Mario Kart as a never-before-seen experience, shedding new light on Kid Icarus: Uprising's story, and revealing a sequel to the cult hit Luigi's Mansion which looks perfectly at home in the small, 3D format.

Still, the high-definition graphical capacity (welcome to the party) and a mind-blowing list of third-party endorsers (including Peter Moore, Ken Levine, and Warren Spector) are enough to dismiss any lingering doubts of Nintendo's commitment to staying relevant in the gaming industry for another 25 years. Nintendo may have come from behind, but it definitely just took the lead.

Judging from the initial reactions over Twitter, excitement and confusion are the two overriding emotions evoked by Nintendo's press conference.

As promised, the company took the wraps off of its new console officially named the Wii U. However, the focus was primarily on the applications of the touch-screen bearing controller and the third-party developer support.

What wasn't revealed was the system's design, nor its actual hardware specifications. Footage from the announced third-party titles and a tech demo of a bird in flight seemed to confirm that its horsepower would be comparable to that of the Xbox 360 and PlayStation 3. At one point, Nintendo of America president Reggie Fils-Aime did mention it would sport HD visuals, but did not go into detail. A bigger emphasis on online integration was also mentioned in passing.

While many questions remain unanswered about the Wii U, Nintendo at least put on an exciting show.Another more surprising area in which the company disappointed was with its first-party titles. It did mine our nostalgia a little on its other systems, however, with the first footage of Super Mario and Luigi's Mansion 2 for the 3DS and a lengthy Legend of Zelda 25th anniversary segment backed by a full orchestra. The announcement of a worldwide Zelda symphony tour was particularly fan-pleasing for those appreciative of video game music.

Outside of tech demos and the revelation of the next iteration of the New Super Mario Bros. series, Wii U first-party titles were thin on the ground. A new Super Smash Brothers game was teased in name only while a brief video of a new Legend of Zelda looked to be comprised of pre-existing Twilight Princess assets.

While many questions remain unanswered about the Wii U, Nintendo at least put on an exciting show. While Sony and Microsoft's conferences had me checking my watch and yawning, Nintendo's left me eager to see more.