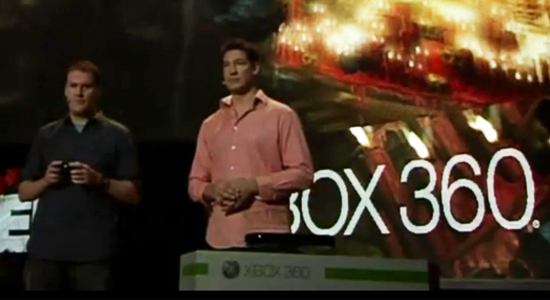 Is that all there is?

n the last hours before Microsoft's worldwide event, we asked what would fill the large blank section where the software company's agenda should have been. It seems Microsoft shared that innocence.

Microsoft opened E3 this year and blindsided attendees — digital and otherwise — and not in a good way, either. The pomp and circumstance of past years' high-energy opening montages was replaced with a sudden, introduction-less demonstration of a game which soon proved to be the highly-anticipated Modern Warfare 3. Thus began a sloppy, often insipid presentation that had no unity or flow and left me rather unenthusiastic about the coming year in gaming on the Xbox 360.

All the usual suspects were present: another Call of Duty, another Gears of War (complete with ebullient-as-ever Cliff Bleszinski at the helm), another year of franchise sports games, another super-realistic racing game. But the energy really never arrived. Perhaps that's because I'm a gamer, first and foremost, and what I love is well-crafted interactive stories experienced from a primarily sedentary position. I predicted no middle ground, and indeed, there was none: Microsoft said a whole lot of nothing.What Microsoft offered instead, for the most part, was a slew of games that require you to get off the couch and flail, most of which concentrate so much on the control mechanics of still-nascent Kinect technology that they seem to have forgotten the necessary factors of good game-making: plot, interesting characters, exciting environments.

The idea of being able to wield a lightsaber, for example, is fool-proof enough to pique the interest of even a non-fan like me — but as I yawned through the Kinect Star Wars demonstration, I couldn't help but notice that that was it: lightsaber wielding in a bland, characterless environment. Fun for five minutes, maybe, but certainly not worth the time or money one typically invests into a new game.

On the other side of the Kinect coin is the precise issue I raised last year with Sony's Tiger Woods demo, which is that ultra-realism in sports games shouldn't be a goal for video game makers. The more realistic your golf swing can be, the more realistic it will need to be for you to do well; eventually, only real golfers will have fun with golf games, and they'll be too busy playing real golf to care. I sense a serious risk that in pursuing this level of "interactivity" with the Kinect, Microsoft (and game companies in general) will alienate their core audience: gamers.

Over the weekend I predicted one of two possible outcomes for Microsoft: they'd stick with what we already knew was coming and bore us to death, or they'd pull out something shocking and generate tremendous buzz. I saw no middle ground, and indeed, there was none: Microsoft said a whole lot of nothing, and not even Halo 4 could resuscitate the flatliner that was this presser.

It was business as usual in many respects for Microsoft. The conference was impeccably paced, bursting with segments brought to us by a cavalcade of developers, executives and even Ice-T. And yet somehow it was supremely underwhelming.

One problem was the lack of any substantial surprises. Ignoring the last minute Xbox.com leak, even Halo 4 and the Halo: Combat Evolved remake were all but known quantities. We received no megaton announcements designed to wow the "hardcore" fans, for Kinect or otherwise.

What was surprising was that the post-conference coverage by GTTV, Gametrailers' and Spike TV's commercial and television-friendly program, actually featured far more compelling presentations. Here’s a shocker — they actually had the developers tell us about their games. Impressive looking exclusive footage of the likes Elder Scrolls: Skyrim, Batman: Arkham City and Call of Duty: Modern Warfare 3. Though I’m not a fan Geoff Keighley and the show’s other hosts they had it where it counts — the content.

At least Peter Molyneux delivered on expectations. He appeared briefly to announce Fable: The Journey, a disappointing-looking Kinect-centric entry in the fantasy series before declaring in no uncertain terms that it'll be "a hundred times more involved" than anything we've yet experienced.

Pastiche was the aesthetic for Microsoft's press conference this year. For ninety minutes, presentation after presentation began and ended abruptly, sometimes wordlessly — half of them without script, vigor or defining purpose. Has Microsoft forgotten how to do this, or is the larder bare and the Xbox's parent uninterested in drawing attention during an off-year?

Standby franchises Call of Duty, Tomb Raider and even Mass Effect processed without note, the message for each amounting to Yes, this game will be on the market within the next 18 months. The first demonstration crested in a comedic "Please Reconnect Controller" error ten seconds in; during the second, a nameless and theretofore mute man stammered something about the screeching Lara Croft before going silent again; Kinect: as we grow older, don't we lose interest in gesticulating wildly? and BioWare's Ray Muzyka reminded viewers that game development is not commensurate to stage presence. It was only well into the event that Epic debutant Cliff Bleszinski arrived with rapper Ice T to showcase Gears of War 3, and appeared to belong in the center frame of a camera.

After nearly a year of trying to sell Kinect to gamers, Microsoft has its initial answer to the question of who would purchase and use the voice-and-motion control scheme: anybody within earshot, what with a supplement of typically youth-oriented fare alongside mainstream offerings ranging from the impressive and innovative (Ubisoft's latest Ghost Recon) to the questionably practical (interpolating yourself into the dialog of Mass Effect 3). As we grow older, don't we lose interest in gesticulating wildly? Whatever Fable-themed shoot-'em-up Peter Molyneux was trying to proselytize us into playing just doesn't carry the appeal of Sesame Street: Once Upon a Monster, and that's probably the point.

Microsoft's fortunes, again, seem to turn on the economic persistence of Halo. Despite a countdown-moment leak about the next title starring Master Chief, no one could reasonably be surprised that the intellectual property will be harvested every season. Still, a remake of the dare-I-say-yet-unmatched Combat Evolved shows faith in the concept that value and longevity is in the quality of the game.