Spare Parts on Game and Player 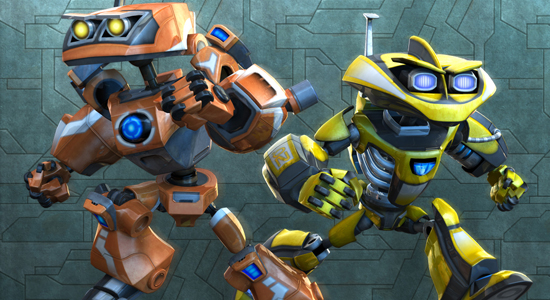 Walk a mile in metallic shoes.

pare Parts, developed by UK-based EA Bright Lights, is an action-platform game where you take on the role of a robot whose goal it is to defeat the evil Sulba Krung, who wants to steal the data from your ship's computer. It can be played single-player or co-op either locally or online.

To start, the player is placed in the metallic shoes of either Mar-T or Chip, two of the robots who survived the crash unharmed. The ship's computer Con-Rad, notably voiced by Simon Pegg, sends his metal comrades out onto the planet to find scattered ship parts, broken robots, and beat up the baddies. Once broken robots are repaired they become playable characters. You will find tools along the way that help you reach new areas and discover hidden goodies. Credits are collected throughout the levels that can be used to upgrade these tools or purchase concept art.

Style suits it: sci-fi savvy with a bit of childhood whimsy.

The game seems to draw inspiration from other platforming titles. The Ratchet & Clank series and Super Mario Sunshine come to mind in particular. The cartoon-like art style suits the game well making it sci-fi savvy with a bit of childhood whimsy. The music is also cute and fun. It's not made specifically for children, but its easy difficulty and learning curve make it enjoyable for all ages.

Co-op mode is a blast. The developers had stated they wanted to create a co-op experience that wasn't just two people doing the same thing at the same time. I believe they succeeded in this goal. You have to use teamwork to reach certain areas containing ship parts and robot companions. There are also special machines here and there that require two players to perform a sequence of actions subsequently rewarding them with lots of credits. You get sync bonuses for using the same ability against an enemy simultaneously. You can also double-jump together and hi-five each other for a health bonus.

I didn't expect much out of a $9.99 download title, but I definitely got more than I expected. There are some issues with the game freezing in co-op mode, which happened to me twice during a roughly hour-long session with a friend. It's not a long game, and it's pretty easy, but very fun nonetheless.