Majin and the Forsaken Kingdom on Game and Player 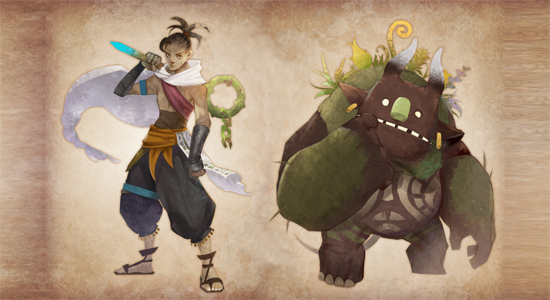 Majin and the Forsaken Kingdom

In all respects, a very enjoyable game.

ajin and the Forsaken Kingdom, developed by Game Republic, is a heartwarming fairy tale adventure. You play the role of a young thief who grew up in the forest, raised by animals, and has a unique gift of communication with them. He soon finds a magical beast known by many names, including Majin, who is trapped deep within the Dark King's castle.

The kingdom has been overcome by darkness and the unlikely two are the only ones who can defeat it. Majin has been drained of his powers, so they must escape the castle and find a way to restore his strength before they venture back to take on the King. Upon exiting the castle, the front door is sealed off by a barrier of darkness with four masks in the center. The two take a break under a nearby tree. When Majin learns the thief has no name, the beast calls him Tepeu. Tepeu is then greeted with a flashback of the Majin's memories from the war when the darkness overcame the kingdom. He soon discovers there is a something deeper behind Majin's role in the story, but because the beast has been sealed away for so long, it has lost some of its memories.

Majin and Tepeu: these unlikely two are the only ones who can defeat the enemy.

Majin and the Forsaken Kingdom's gameplay focuses a lot on teamwork. Tepeu and Majin have different strengths and weaknesses. Tepeu is small, fast, and can sneak around enemies. Using stealth tactics, he can take out enemies without being seen or heard. He is weak and has a harder time taking on enemies head on, but his agility allows him to quickly dodge attacks and counter. Majin is much stronger and gains magical powers throughout the course of the game including wind, lightning, and fire. It is slow, though, and can easily be overcome by a large group of enemies. Majin is mostly controlled by the computer AI, but can be given different commands to help solve puzzles, reach high ledges, and defeat various enemies.

Defeating enemies harbors both blue gems called Life Shards that give Tepeu experience to boost his stats and red gems called Friendship Shards which increase the level at which Tepeu and Majin work together.

In many areas of the game you will find fruits that increase Majin's powers. A few large fruits, which are hidden deep away and heavily guarded by forces of the darkness, restore Majin's magic. Its magic is used to access new areas and ultimately help in defeating the four dark generals, who must be defeated to remove the seal on the castle door. You also find costume pieces for Tepeu that supposedly give him special abilities, but I don't notice much difference other than his appearance.

Victory through teamwork: Tepeu and Majin have different strengths and weaknesses.Even though the game can be displayed in full 1080p, the graphics certainly aren't as clean as they could be. Pop-in is definitely an issue I have noticed. You will be walking along while trees, bushes, rocks and such will suddenly appear a short distance ahead, as if by magic. Other than that, the graphics do fit the mood of the story well, giving it a magical sort of feeling.

Despite the small graphical issue another part of the game's aesthetic makes up for it. The soundtrack is absolutely gorgeous and one of the best I've heard in recent games. It has very rich, warm orchestral tracks that were recorded partially in Japan and England.

The voice acting, however, is pretty hit-or-miss. Some of the voices are well done, including Tepeu and the dark generals. Majin's voice is very cartoonish (he reminds me of a Disney giant) but he becomes more lovable a character the more you learn about him. The animals throughout the game that give you hints or talk with you sometimes have okay voices but are often shrill and annoying.

While Majin and the Forsaken Kingdom doesn't really bring anything particularly new to the table it's still a very enjoyable game. It's not overly difficult and the puzzles are simple enough you shouldn't get stuck more than a few minutes at most. The budget price and quality soundtrack make it an easy choice for those who love a good adventure.

Majin and the Forsaken Kingdom