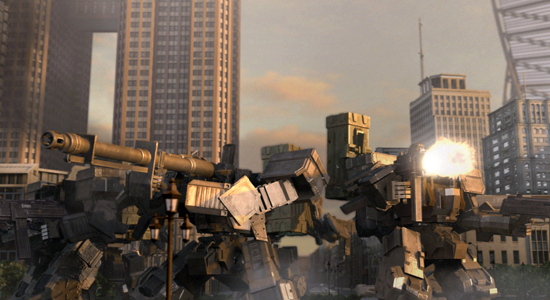 I had such high hopes.

My expectations weren't met. This generation of consoles has seen an abundance of third-person shooters. Front Mission Evolved sadly brings nothing new to the table. I didn't find anything about the game to be particularly innovative. It just took the same customization options that have been present in all the previous Front Mission games, took out all the fun tactical elements of the gameplay, and polished it to a nice, dull gray.

Set in 2171, 50 years after the events that took place in Front Mission 5 (which never came Stateside), Front Mission Evolved revolves around the story of Dylan Ramsey, a wanzer (mech) engineer. Humans have built a number of space elevators to set up surveillance satellites to watch their adversaries. Tensions are high between opposing military nations, and when an orbital elevator in USN territory is attacked by unknown assailants, all hell breaks loose. Dylan's father is stationed in a nearby research center so he sets out to rescue his father. Along the way he runs into USN forces and gets wrapped up with the military.

Silver lining: there isn't anything particularly offensive about the controls.

The graphics aren't completely awful but they could have been a lot better. Often times I'd have trouble picking out the gray/brown enemy wanzers from the gray/brown backdrops. The character design leaves something to be desired, too. The protagonists ware all clean-cut and generally friendly looking while the antagonists all look like they're strung out on drugs and haven't bathed in weeks.

The voice acting is pretty bad, too. The melodrama is so thick, you could cut it with a knife. I don't think a video game really needs to compete for a daytime Emmy. I would at least expect them to portray their emotions a little better to draw the player into the story and feel a connection with the characters. I honestly didn't care what happened to any of them; I just wanted to get it over with.

Dylan discovers that the real culprit behind the various attacks on the orbital elevators is a secret rogue organization, the Sword of Damocles, who operate out of what's now known as Babel. It had been a joint effort on the part of the three ruling nations for a single elevator, but was abandoned and never finished. Somehow the Sword of Damocles found the funds, resources, and manpower to finish the orbital elevator and set a plan into action that would destroy the military forces of the three ruling nations from space and create one large, borderless, anarchy-stricken nation. For whatever reason, the developer decided to show part of this cutscene on the title screen idle, giving away part of the plot — so if you didn't dive directly into the game you already had an idea of what was going on.

That's a very dramatic firefight, mind you: I don't think a video game really needs to compete for a daytime Emmy.Luckily for the game, there isn't anything particularly offensive about the controls. It doesn't deviate far from what you'd expect of a third-person shooter and works out well in both the wanzer sections and the parts of the game you go on foot. There are parts of the game, however, that are frustrating because you're forced to use certain types of legs for your wanzer. Your allies still have their normal two legs and the terrain isn't anything that seemed like it would actually require you to use four legs or a hover style instead.

There was also a mind-bogglingly steep difficulty curve near the end of the game. I was playing on hard mode but up until the final two battles and a short stage in between, it wasn't all that rough. I appreciate a good challenge, but this was a cheap shot.

I had high hopes for the game coming in since I've always loved the Front Mission series, but was sorely disappointed. While I have no idea what's happened to Square Enix in this generation of games, it seems like their titles for the high-profile systems aren't living up to their potential. If you really love mech games and have a strong desire to play this still, do yourself a favor and just rent it. The single player campaign is only around six hours long if you plow through.

I was hoping for something so much more. There has to be a decent new mech game for western audiences soon.

I have the same robotic-humanoid-shaped hole in my heart. Chromehounds had gone fatally unpatched for a year or two when Sega finally shut its servers, but it kept me (and my Twos counterpart, Jeremy) occupied off and on for a couple years.

Mechwarrior, perhaps? If it emerges from its underground laboratory high in the Himalayas?

I haven't tried this but I'm willing to bet we'll have to wait (and I mean wait) for a new mech warrior. Unless they decide to make another chrome hounds or similar which I doubt we will be seeing any time soon if at all.

I'd love to see another Chromehounds. Could it be so expensive to produce another bare-bones niche title, From and Sega? Pretty please?