Metroid: Other M on Game and Player 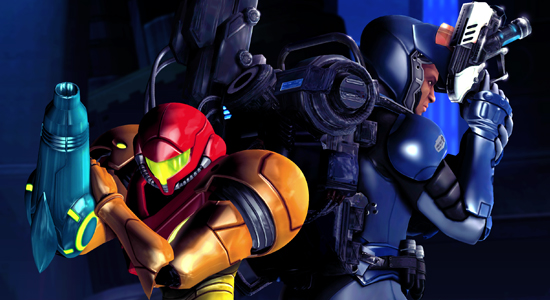 Other companies should take a cue from Project M.

etroid: Other M bridges the story gap between Super Metroid and Metroid Fusion. It's the second original title in the series for the Wii and the first in the series to be mostly in third-person. The development team behind Other M features members from Nintendo, Team Ninja, and D-Rockets collectively known as Project M.

Other M takes place shortly after the events on Planet Zebes during Super Metroid. Samus Aran narrowly escapes when the planet explodes and soon finds herself on a Galactic Federation ship. After leaving the ship she receives a distress signal on her ship, which is known as a "baby's cry," from a dormant space station called the "Bottle Ship." The "baby's cry" makes her think of the baby metroid that gave its life to protect her from Mother Brain, so she heads off to the space station to investigate. There she runs into a group of soldiers from the Galactic Federation who she used to work with before going solo as a bounty hunter. They soon discover the "Bottle Ship" is a large facility for the development of bioweapons to be used in intergalactic warfare for the Galactic Federation. It was a secret operation not sanctioned by the Galactic Federation and things went terribly wrong.

The first thing I noticed about this game compared to previous Metroid games was the amount of narrative present. It felt more like a movie. Cutscenes delve into Samus' past through flashbacks throughout the story.

The who, what, when and why: cutscenes delve into Samus Aran's past through flashbacks throughout the story.

You learn a lot about her background, why she carries some resentment toward the Federation, and why she ultimately went maverick. I thought the narration was pretty well-done; the voice acting was a lot better than most games. After completing the game you even can watch the cut-scenes along with recorded clips of the game as a kind of movie.

Coupled with the cinematic quality of the game, the graphics are quite astounding for the Wii. I was really impressed by how smooth everything looked, lighting effects, the textures, and the animation. I would even go as far to say the graphics were almost on par with some games on PlayStation 3 and Xbox 360, just obviously restricted by the Wii's 640-by-480 maximum resolution.

The sound design also had a nice quality to it, although it doesn't vary much from older Metroid titles other than the voice acting. The music is minimalistic, sci-fi ambience for the most part but there are some bombastic orchestral pieces during boss battles. The sound effects are mostly the same ones we've been hearing in the previous games.

One area where the game particularly shines is the action. Playing in third-person, I was a bit skeptical at first on how well it'd handle, but I have to say I love what Project M did with it. Aiming is a breeze with the auto-aim system the game uses. For the most part you hold the controller sideways to move and fight, but occasionally you are required to switch to first-person by pointing the controller at the screen. The controls are a bit shaky, sometimes, and switching between views can be frustrating since buttons will perform different actions depending on which view you're in. I constantly found myself rolling up into the morph ball immediately after coming out of first-person view where I was pressing the same button to shoot at an enemy. Often times the action can get pretty intense, especially during boss fights, and you have to switch views very quickly to fire off a missile.

Careful which way that's pointing: buttons will perform different actions depending on which view you're in.Another thing that was a bit confusing at first was the map. Instead of being a 3D map like in the Metroid Prime trilogy, it uses a 2D map like Super Metroid and the like. It took a while to get used to how to read the map and I would have trouble figuring out where a particular door was or what direction I was going.

With the game's upgrade system, you'll discover the standard energy tanks, missile tanks, and the like scattered in various places — some well-hidden — around the ship. Other upgrades, like weapons and armor, are unlocked at certain points in the story when the commander of the federation troop you are working with during the game allows you to use them. Some new upgrades were added, like the diffusion beam that hits multiple targets with a charged shot, energy parts that form a full energy tank when four are collected, and accel-charge upgrades that make your beam charge faster.

As with many other action-adventure games, and this is only a minor complaint, it's very short. The main story only takes around 8-10 hours. You can return to the "Bottle Ship" after the main story to retrieve the remaining items and play out an additional part of the story. With a 100% item collection you unlock hard mode. As if the regular mode wasn't hard enough, hard mode pits you against all odds with only 99 health and 10 missiles. No energy tanks, no missile tanks, no recovery tanks, nothing. You only get the standard weapon and armor upgrades that come throughout the story. The enemies hit harder and are more difficult to kill. It is a test of skill for the die-hard Metroid gamers.

Other M is probably the most fun I've had with my Nintendo Wii since I bought it and I really hope other companies can take a cue from Project M to what a "serious" or "hardcore" game should be like on the Wii.