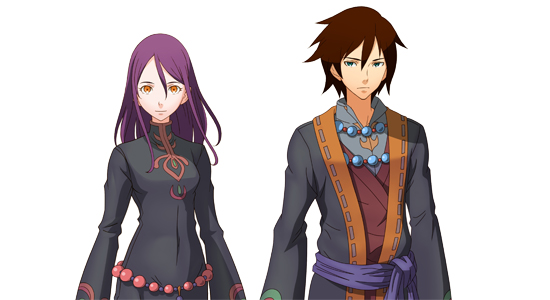 It should help kill time until the next best thing comes out.

here is a blatant lack of JRPGs for the Wii. Ignition and Marvelous entertainment tried to fill the void with their latest release, Arc Rise Fantasia.

Arc Rise Fantasia tells the story of a young man destined to meet a young girl and embark on an epic quest fraught with peril, plot twists, and religious overtones. The hero of this tale, L'Arc Bright Lagoon (say that ten times fast), is a mercenary hired by the Meridian Empire to help dispose of a feldragon threat. After a chance encounter with one feldragon, he meets a mysterious girl named Ryfia, who is a Diva from an opposing nation on a quest to seek assistance from higher powers after her home is attacked and her mother is killed. One thing leads to another and the two become bound by fate on long, sometimes confusing journey.

Painfully familiar aspects of this game made sense when I read the director also worked on Tales of Symphonia. Arc Rise Fantasia borrows Tales' interstitial optional conversations between characters that are often amusing or informational. It also has very similar art direction, like the overworld map, town designs, camera angles, and other subtle things. One more (kind of annoying) parallel is the poorly designed menu. These things make the game seem almost a little uninspired.

The girl: Ryfia, a Diva from an opposing nation, on a quest to seek assistance from higher powers.

One thing that definitely separates this game from its Tales cousins is the battle system. It's actually the thing I enjoyed the most about Arc Rise Fantasia. At first it appears to be a run-of-the-mill turn-based system, and feels awkward and cumbersome until some advanced options start opening up. Later when said options become available the quirks to the system become understandable.

Your group shares a set amount of Action Points (AP). Each character in the party has a starting amount and a maximum amount. Each action a character can take uses up AP. You can use up all AP with one character or split it up. At the end of each round, a set amount of AP is restored. Later on you unlock combo attacks where you can combo 2-4 attacks with a single character. There is also a magic combo system that comes available. If a single character or multiple characters cast the same spell it will increase in power and become a much more powerful spell.

There are also special actions each character gets called Excel Acts (which have nothing to do with spreadsheets, I promise) and have a chance to combine acts to perform a very powerful Trinity Act. And what JRPG would be complete without some kind of summon creature? You can summon a creature called a Rogress to perform a very powerful attack when you fill up its meter.

Arc Rise Fantasia has a very unique weapon system, too. The weapons you acquire don't have a set attack power or any stats like that, but have this kind of grid system instead. Each one has a set ability attached to it and a different ability you unlock through use that can be transferred to any other weapon. The weapons only have a small 4x4 grid to work with so space is precious. You have to choose what abilities you want to equip to a weapon wisely depending on the situation you're in.

More than meets the eye: the battle system is what I enjoyed the most.The one situation you can never seem to adequately plan for the first time around are the boss battles. I only had one boss encounter during the course of the game I didn't need to try at least twice. Most of them are unrelenting and if you're not ridiculously overpowered (which is hard to do considering enemies give less experience as your levels increase) then you have to have a careful strategy planned for taking bosses out. Some are just downright frustrating considering how easy it is to blow through the normal enemies on the maps just before the boss encounter.

Graphically it's also similar to Tales games and really seems to pride itself on the elaborate town designs. The limited exploration available in the towns make the towns' outward appearance just for show, though, but the eye candy is nice. The music is mostly generic and not at all memorable, so it's not really worth going into.

My other gripe about this title is the localization. Not only does the dialog seem poorly translated but the voice acting is so awful it's almost better just to turn the voices off and make up your own voices while you read the text. They could have at least included an option to switch to Japanese voice acting, but perhaps they took it out because of space issues on the DVD.

For those Wii owners who love JRPGs and don't have much other option, this is an experience that will help kill time until the next best thing comes out.