Planet Minigolf on Game and Player 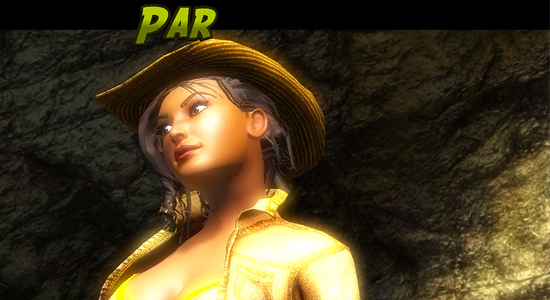 lanet Minigolf is the newest creation by Zen Studios, creators of the popular Zen Pinball game. The game features a single player mode with 4 exotic locations each with 4 sets of courses.

Locations include the pirate-themed Buccaneer's Hideout, inner-city Soho, arctic base Polar Station, and an Aztec-themed Ancient Valley. The four courses at each location are split up by the overall difficulty of the course: Warm-Up, Pro, Extreme, and Wacky. Each course is unlocked when you finish the previous difficulty and are made up of harder, trickier holes. Various power-ups appear scattered around some holes (like a speed burst, magnetic hole, guided ball that uses Sixaxis controls, and more) that will aid you with trickier shots.

Winning a course awards you with keys to unlock clothing and accessories for the characters. You also earn points throughout the course by doing trick shots or earning badges. When you initiate a trick shot, your multiplier will go up each time the ball bounces or hits a wall. If you make the shot you earn 10 times your multiplier.

Badges are awarded for various things like getting a hole-in-one, long shot, birdies, and eagles. Points can determine a tiebreaker but mostly affect your online rankings.

The two most important things that can make or break any golf game are the controls and the physics. The physics in this game are just fine, exactly what you'd expect from miniature golf, but the controls leave a bit to be desired. You can choose between three control modes. With easy controls you simply line up your shot, hold X to power your shot, and release. Three-click control is a more advanced version of easy controls. You press X to initiate, X again for power, and X a third time for accuracy. The final control scheme, called direct, is controlled completely with the left analog stick. You pull back for power and push forward to hit the ball. Direct probably has the best feel of all three and feels most natural without the luxury of motion controls, but it's easy to lose your accuracy during the swing because the analog sticks are so sensitive.

Five golfers are available to choose from, ranging from a 12-year-old Japanese schoolgirl to a 36-year-old, beefy drill-sergeant type. The character selection is purely cosmetic since the characters don't have any special powers or stats of any kind. You can customize your characters with different outfits and accessories including tops, bottoms, shoes, putters, balls, and more. Still, a character editor would have been a nice feature to include.

Zen Studios did, however, include a very nice hole and course editor. The editor works great, is easy to navigate, and fun to use. Courses are made up of nine custom holes, which you can create yourself or include from published holes. Once you create a hole or course and tested it you have the option to publish it where it can be played and rated by anyone on the PlayStation Network.

The rest of the game is pretty standard stuff. The music fits well with the theme of each location and the graphics are pretty good for a $10 download game. It has both local and online multiplayer, a replay mode, and scoreboards. Definitely worth the price if you love miniature golf.