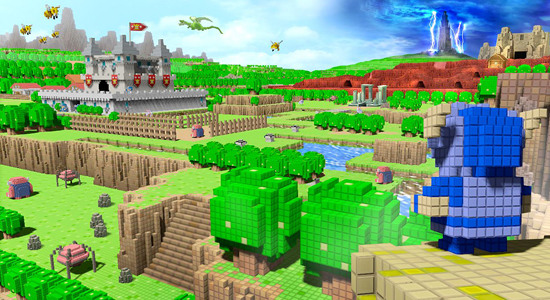 h, the good ol' days, when life was simpler and sprites were only two-dimensional. The kingdom of Dotnia was saved from the evil Dark King by the hero of legend, and the Dark King was sealed away, by the power of the six sages, inside of an orb. Once everything had calmed down, the legendary sword which the hero used to defeat the Dark Lord was tucked away at the back of a nearby forest in a convenient stone altar, just in case. After the world was saved, however, things started getting boring. Living in two dimensions was getting to be a drag, so the King of Dotnia declared the world would become 3D! And so the land of Dotnia was upgraded. A whole new axis of vision. A new way of life.

But with every upgrade, there are bound to be some glitches. A new threat to the kingdom arises. A mysterious Dark Bishop steals the orb in which the Dark King was sealed and chaos erupts across the land. Monsters appear and the world is once again unsafe for the common folk of Dotnia. You, the grandson of the hero, are summoned by the king to retrieve your grandfather's sword, seek out the six sages to gain their power, and defeat the Dark Bishop to save the world once again.

Most of the game's inspiration comes from The Legend of Zelda with subtle hints to other classic titles here and there.

If you haven't noticed yet, 3D Dot Game Heroes is a throwback to the classic era of gaming we refer to as 8-Bit. Most of its inspiration comes from The Legend of Zelda with subtle hints to other classic titles here and there, like Dragon Warrior. If imitation is the sincerest form of flattery, then I'm sure the developers have caught the attention of Mr. Miyamoto. Even when you first talk to the king, before he sets you off on your adventure, he drops a very tongue-in-cheek line that will have die-hard Legend of Zelda fans rolling out of their seats.

Everything in this game is retrofitted to its fullest potential. The music, sound effects, animations, world design, character design, dialog — you name it. Some of the sound effects are almost identical to sound from Dragon Warrior, perhaps intentionally, but they made me laugh. Another direct allusion to Dragon Warrior is the two-frame animation on the castle guards. It's all so well done that suckers for nostalgia will feel like it's 1986 all over again.

The visual design is hilarious and exactly what you could imagine if 2D NES sprites were suddenly transformed into 3D. The world is built of many small blocks, which look like a pixel-cube. When enemies are killed they explode into a bunch of separate blocks. The graphics are initially set to have a grid-like border around the blocks, but this can be turned off for a smoother look (which I personally think looks and fits the style better). The default camera angle is somewhat off-putting because the background is blurry and it's hard to see paths behind close walls — but, helpfully, other camera options are available.

The visual design is hilarious and exactly what you could imagine if 2D NES sprites were suddenly transformed into 3D.The most attention-grabbing feature 3D Dot Game Heroes brings to the table is its customization. You can create your own zany characters in a very detailed editor. Your sword has the potential to reach much further than one tile away from you — and at the blacksmith's you can upgrade a weapon's length, width, spin, attack power, pierce, and more. You can also pay to reset the sword to factory condition to spec it out differently, but money doesn't grow on trees so choose your upgrades wisely. Pierce is one of the most useful upgrades, as it will allow your sword to ignore obstacles like walls, trees, rocks, and fences and hit enemies and objects beyond them. Word of advice: it's also very helpful to have once you get Dash Boots, or else you'll find yourself slamming into walls very quickly.

The game includes a set of mini-games that let you step away from the main action for a few minutes for a little fun on the side. One is a tower defense game where you have to frantically build towers to fend off waves of enemies before they reach the other side of the map.

The rest of 3D Dot Game Heroes is pretty much structured on the classic Zelda gameplay. Sometimes it almost feels like you're just playing a Link to the Past HD remake with wacky block characters. You explore the overworld map, find the next dungeon, explore the dungeon, find a unique accessory to help you along the way to fend of enemies or reach new destinations, kill the boss, gain a piece of health meter — repeat. The retro style and humor may get a little stale after several hours, but it's so classy and true to its roots that 3D Dot Game Heroes fits nicely on the shelf next to our favorite childhood memories.

From my time with this game I've been very impressed. From the subtle winks and prods at 8-bit classics to the surprisingly deep gameplay, this really is one title that 'Old School' gamers should at least check out.

What I've found to be particularly shocking is the level of creativity that people have been bringing to the character creator. From the original creations that can be seen at the main site for the game or the many remakes of classic characters that have been done by fans. I mearly wish that I had a mear fraction of the talent that those people have.