Puzzle Chronicles on Game and Player 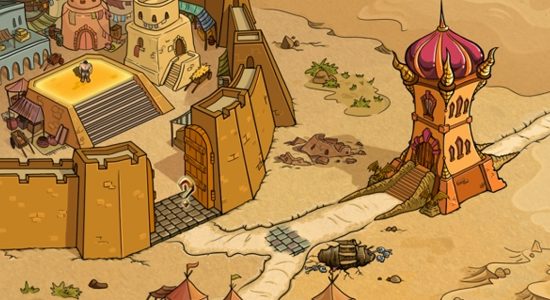 It should be more at home on the handheld market.

ixing puzzle games with RPGs was a pretty unique idea with the release of Puzzle Quest. It was a really fun game and I've put plenty of hours into it on my PSP. When Puzzle Chronicles was released via digital download recently, I got excited thinking it would be a lot like Puzzle Quest. My assumptions were wrong, although the game deserves a bit of merit.

First off, when you start a character you only have one option, since the game is story-centric and follows the trials and tribulations of a barbarian who narrowly escapes a life of slavery by being bought out by a kind stranger. He travels the lands battling adversaries in search of the Horned Daemon who is behind all of the evil in the world so his people can be freed from slavery for good. Because Chronicles is a story-based game, it does provide quite a few hours of gameplay filled with extra content.

Puzzle mechanics are a bit quirky at first, but once you get used to them, they're kind of fun.

Puzzle mechanics are a bit quirky at first, but once you get used to them, they're kind of fun. Imagine a Puyo Pop/Super Puzzle Fighter style of gameplay, with a few added strategies, only turned on its side. At the start of a battle there is a divider in the center of the puzzle field. You destroy gems to build up your rage meter which makes you deal damage to the enemy and move the divider towards it. Once the enemy's side of the board is filled to where it can't make any more moves, you win.

Other styles of puzzles appear through mini-games to train your pet, unlock dungeons, search for treasure, crafting, and training your skills. They all have a basic connect-four strategy but with different ways the pieces fall, including the occasional bomb which destroys all pieces surrounding it.

At first the graphics for the game were not doing much for me. The cutscenes look like a web comic or flash animation. While exploring the map, your character looks like he'd be more at home on the PSP or DS. One area with the graphics where I'll give credit where it's due is the fact that equipment changes are reflected on the character model on maps and during battles. The music and sound effects are okay. Nothing that stands out but nothing particularly bad either.

For a low-priced digital download game, I couldn't say I would really expect much, but when you have gems out there like the new Mega Man games, PixelJunk titles, Braid, Flower, etc. it seems like developer Infinite Interactive could have tried a bit harder to polish the overall style of the game. Puzzle Chronicles is cheapened by being on the big screen, and should be more at home on the handheld market.

I guess I didn't realize that the game is in fact out on DS and PSP also. The only problem is the price tag. $9.99 digital download or $29.99 for the handhelds. Definitely NOT worth the extra $20! For the big puzzle/rpg fans out there--wait till it's in the bargain bin.