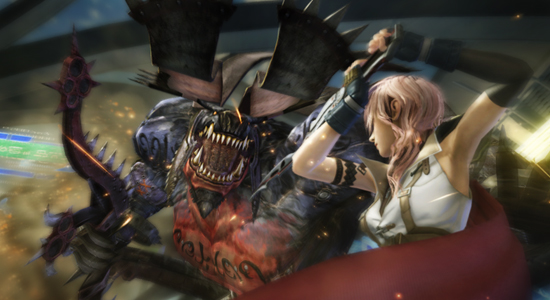 One can't help but think it could have been better.

s I sit here writing this review for Final Fantasy XIII, the latest behemoth in one of Square-Enix's most beloved series, I am having a hard time clearing up all of my thoughts about the game. I've been a fan since the beginning, as perhaps many of you are, so I had high expectations of the game. The time I've spent with the game has been enjoyable, no doubt, but I can't help but think it could have been better.

The definite high point of the game is the graphics. The world is mostly eye candy. I found myself stopping to look around now and then, soaking in the beauty and attention to detail. Every little thing is designed so well there is virtually no clipping or pop-ins. Sometimes the heavy amount of detail causes the framerate to drop a little which made me grimace on more than one occasion. The battles are just as graphically intense, especially in huge boss fights, with stunning animations. The bad part is that the story, character development, and gameplay mechanics tend to take a back seat to the visuals all too often.

Credit where due: the Paradigm Shift system is certainly a unique way of handling things.

The game's story starts out in the middle of a massive purge of people from their homeworld to some other, much less-desirable place. You don't really know the motives behind what's going on. Then some of the game's lead characters show up and start causing a lot of chaos. The story is slowly revealed through conversation of characters and the occasional flashback, but remains confusing for a good portion of the game. New people will suddenly appear with apparently no rhyme or reason but everyone gets along just hunky-dory and fights alongside each other for the greater good. There are a lot of emotional moments during the plot but the character development is so thin that it's really hard to care. It's also a very linear game. It's as if you're on rails chugging through a lot of needless battles just to see the next cutscene and watch more of the story unfold. I don't feel like I'd have any reason to ever replay the game once I've finished it.

While it's not necessarily a bad thing, you don't gain experience levels like in a more traditional RPG. You gain skills and stats by filling out the Crystarium, which is almost exactly like the Sphere Grid system from Final Fantasy X but a lot more limited. Each character has a unique set of skills he or she learns through the Crystarium so at least they're not all clones. There are several class trees to each individual's Crystarium to be filled out, but you get enough points you can easily fill each tree without much grinding. This system leaves a lot to be desired because of how linear the development is, though, and replaying the game you would be stuck with the exact same options.

I will give a nod to the battle system for trying something new. The Paradigm Shift system is certainly a unique way of handling things. Your battle party can switch between a number of roles at any time using the system to create tactical advantages over your enemies. If you leave the battle speed on normal then fights are usually fast-paced and sometimes challenging. You don't have control over anyone but the leader of the party, and most of the time you'll find yourself mashing the "auto-battle" function and switching roles as necessary to keep the party alive. Be warned that if your party leader dies, it's game over.

Linear: it's as if you're on rails chugging through a lot of needless battles just to see the next cutscene.Luckily the game developers knew that sometimes battles would be cheap or frustratingly difficult and added a nice little retry option that you can choose if you die; or even during the middle of a fight. A good example of those hair-pulling fights would be one with the Eidolons, or summons, which are required battles during the game. Eidolon encounters require you to fill up the creature's "Gestalt" meter, before your time runs out and you die, by performing certain actions that it has an affinity for which sometimes takes two to three tries before you really get it down. Then to reward your efforts, you can summon the party leader's Eidolon during battle, but their attacks are ridiculously weak even when you switch to Gestalt mode and start unleashing a fury of specialized skills.

Most Final Fantasy titles are also heralded for their amazing soundtracks. The sweeping orchestral backdrop to this game provides an excellent atmosphere, however, not much of it is memorable. The most memorable song in the game is probably the battle music only because you hear it so often. I also think a part of my childhood died when I heard the vocal version of the chocobo theme this game introduced.

While this review may seem a little harsh, I definitely don't hate the game. It just really didn't live up to the potential it had. It's a lot of fun but I can already tell it will have little or no replay value. The developers at least had the gall to try a lot of new things where most JRPGs just use the same formula. If you're a die-hard Final Fantasy fan like myself, you already own the game and have poured hours of your life into it. If you are unsure of whether or not to get this game, then I would suggest waiting until the price drops or it's released as a "greatest hits" title.

You picked up on pretty much everyone of my gripes with the game, which is gratifying to hear from a self-proclaimed Final Fantasy die-hard.

Your review is pretty close to what I was feeling about the game at first. I liked how the story developed in the later chapters, but was really unhappy with what I saw in the beginning.

I found the best way to use Eidolons was after you hit a stagger point with an enemy or boss. Like you said, at regular percentages they don't do very much damage at all. I watched my wife pull one out during a stagger and was impressed with the damage they can cause then.

A 3 1/2 out of 5 is pretty fair as well. The game is very linear which isn't all bad, but there are times you just feel like you're going from one enemy to another. The game probably would be much shorter if the fights were more avoidable.

Still, it's a decent game, but for someone who's a hardcore fan, or new to the series, I could see waiting for the price to come down. I'm still glad I bought it and enjoy the unlockable Dashboard themes for the PS3 version (360 has gamerpics).

Spent the last week spinning through the FF 13 OST, and your review mirrors my impressions.

Isolated, the tracks are all right--with the exception of a few that seem uncertain as to what they really want to be--but what they lack is the storytelling-through-music that was so present in Uematsu's and Sakimoto's previous scores. I had obsessed over the FF 12 OST months before I had ever played the game, and the music was so brilliantly written I felt as if I had already gone through the game.

I feel none of this through the 13 OST; the tracks seems incidental, or through-composed for specific events without really developing toward a long-term arrival.