Glory of Heracles on Game and Player 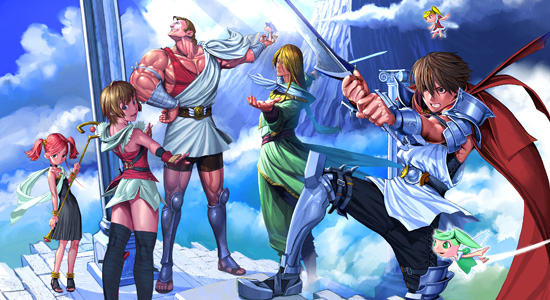 ifteen years ago I was totally in love with my Super NES and RPGs. I would buy and play almost every one religiously from start to finish, sometimes multiple times, doing every side-quest possible and not missing a single corner of the maps while exploring. Maybe it's just whimsical nostalgia or perhaps the production values of games was higher back then, but I just don't always get the same feeling from every RPG that comes out of Japan these days. Glory of Heracles, which is actually the fifth game in the series but the first to hit American shores, didn't do anything to sway my feelings.

Starting off you get a glimpse of some lead characters in the game and a short scene of a mysterious man telling Heracles to get on a glowing platform. Next, you wash up on a beach, your memories of who you are and everything about you gone. Just after you regain your bearings and start off to figure out what's going on, you are knocked off a cliff in a forest by a young boy (who is actually a girl) named Leucos. After Leucos presumes you are dead, you learn you and she are both immortal. You find out that she has no memory of her past, either. 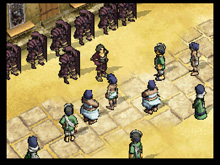 Lost and found: an amnesiac is in fact Heracles, son of Zeus and legendary hero.

Somewhere in the forest, pixies reveal that the amnesiac is in fact Heracles, the son of Zeus and a legendary hero. Heracles and Leucos decide to travel to Mount Olympus together to find Zeus and figure out their true identities. Because of Heracles' reputation — and not actually being able to prove his identity — he travels under an alias of a player's choice. Along the way, Heracles and Leucos meet three more immortals who also have no recollection of their pasts: a pretty boy who is good with the ladies (or thinks he is), a man who thinks he is the legendary Heracles, and a young girl who seems very wise for her age. Just your typical cast of rag-tag adventurers who share a common goal and somehow all meet up along the way.

Most things about this game are clichéd. It has an anime intro scene with a mish-mash of scenes somewhat related to the game, silent protagonist, cast of diverse characters with a common goal, completely linear storyline, forced tutorials, and the shops all magically have better items as you progress through the game. It does, however, take many of these things and improves on them in some way or another.

The battle system is very similar to old-school Final Fantasy titles. Characters can be arranged in the front row or the back row, enemy encounters having the same style of formations. There is quite a lot of improvement to the battle system compared to other similar games, though. When an enemy is knocked unconscious, its body does not immediately disappear from the battlefield (unless it is the final enemy dispatched). This leaves a chance for an "overkill," where the enemy is transformed into ether which can be absorbed by characters for extra magic points. In the case of undead and mechanical enemies, they must be destroyed with an overkill or all taken care of within a single round or they will revive at the end of the round. 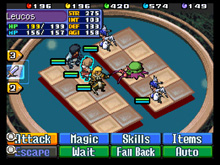 The battle system is very similar to old-school Final Fantasy titles, with a few improvements.The magic system adds some unique elements, also. When certain magic is cast you sometimes have the option to power up the magic via touch-screen events. You learn new magic and power-up skills by praying at statues of the gods and training with pixies. Each character also has a set of skills to use depending on their equipment and things they have learned from their prayers. One more unique feature to the battle system is the battle log, which appears on the touch-screen during exchanges. You can pause the battle to look through the logs to see a breakdown of all the action.

One other thing this game definitely did right is the graphics. It looks good for a DS game and has great animation. The character designs are neat, although a little rough around the edges.

Everything else about the game is pretty run-of-the-mill, sadly. The music is fairly generic and unmemorable. The story isn't hitting the best-seller shelf anytime soon and the dialog is mostly awkward and sometimes laughable — only notable in how civilian NPCs in towns change dialog depending on where you're at in the storyline.

Glory of Heracles might have garnered more favor if any of the other titles in the series had been released stateside and I had played them when I was younger, but as it stands it's just like any other Japanese RPG. This isn't entirely bad, because I still enjoy the game and I'm glad I bought it. If you're a fan of SNES/PlayStation-era JRPGs and need a fix, this title will be sure to please.