Shadow Complex on Game and Player 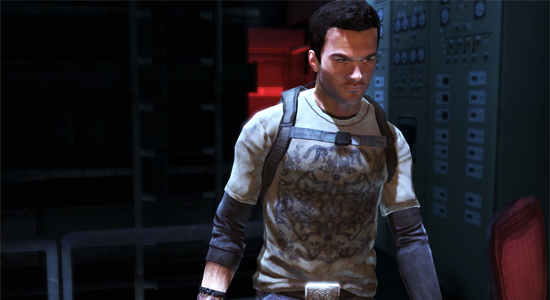 Platformers are back, and life is good.

n the Beginning, there were platformers: side-scrolling games centered around jumping and maneuvering gamescapes littered with bad guys. Platformers were a popular medium because the genre easily accommodated any backdrop or story, and because the third dimension had yet to be realized. The craft seemed to die for a while, taking a back seat to 3D games, first person shooters and real time strategy games, but it's hard to replace the satisfaction of a good platformer, and as video games increasingly compete for precious remaining time in our lives, single-serving, pick-up-and-play games like Epic Games and Chair Entertainment's Shadow Complex on Xbox Live Arcade become all the more appealing. Platformers are back, and life is good.

Throughout the 80s and 90s, game makers improved upon the platformula with classics such as Megaman, Castlevania, Sonic the Hedgehog and Contra. Nintendo eventually perfected the formula with the Metroid series, releasing (arguably) the pinnacle of platformers: Super Metroid. It featured loads of hidden areas and items, progressive upgrades to weapons and armor and stunning graphics for its day, making it a tremendous success. It's easy to see why the makers of Shadow Complex unabashedly credit Super Metroid when they set out to make this generation's next platformer sensation.

Beautiful: water effects even
look nice for a platformer.

Where Shadow Complex attempts to mimic Super Metroid it really shines: progressive upgrades increasing your loadouts, stats and weaponry, a sprawling game map and lots of jumping, wall-grabbing and hookshotting action. It feels instantly familiar taking control of the main character in Shadow Complex, and as you add more movement upgrades to your suit, you begin to feel more like Samus Aran than Jason Fleming. But Shadow Complex also shines in the areas where it diverges from Super Metroid, like leveling up your abilities and statistics and the flashlight system for identifying interactive terrain. My only real complaint here is that they didn't improve upon the map, which I've always seen as the weakest link in the chain.

Looking for hidden areas feels familiar, although illuminating walls and vents that can be interacted with simplifies things a bit. Objects that reflect purple can be used with the foam gun, yellow objects can be shot with the machine gun and red objects can be destroyed with rockets. Blue objects are only destroyed when you hyper boost and run through them. Even so, you will have to climb around and really investigate each area of the game to find hidden ammo and power suit upgrades.

Exploration is a delight, after all. The game is very beautiful. I've seen some improvements on the formula in the last few years, but nothing as pretty as this. To its credit, the Bionic Commando remake for Xbox Live Arcade felt a little kludgy, like its 1980s contemporary, but you'll find none of that here — Shadow Complex is incredibly smooth. You begin the game in the great outdoors on a nature trail searching for your missing girlfriend and work your way down into an immense military complex via a system of caves and tunnels.

The outside environments are lush and green and the water effects even look nice for a platformer. During one chapter of the game, you swim through a flooded portion of the complex with enemies and debris free-floating in the water, creating a truly amazing visual effect which will look very familiar if you've played the Xbox Live Arcade game Undertow, also developed by Chair. While still a true side-scroller, the game also allows you to shoot into the background at enemies and objects, creating a smooth-looking faux-3D backdrop that looks really cool — but can be a pain in the ass sometimes. You don't see a lot of variety in enemies or landscapes, but what you do see looks polished and clean, which is definitely a good thing.

Boss fights? No problem.Of course, some things are a little different from Super Metroid — the right stick is used to precisely aim and fire your weapon, and boss fights are a walk in the park. If you're looking for a challenge, you won't find it on normal difficulty, but you might like what you see on hard. Besides, you will still enjoy lurking around the game's luscious map, destroying crates and looking for vents and crawl spaces where upgrades hide — and there are quite a few. Although I've made it to the final boss, I haven't managed to find more than 85% of items, but I'm still looking and won't be happy until, much like Pokemon, I collect them all.

Overall, Shadow Complex is a solid title to round out the Summer of Recessionary Gaming . . . I mean, Summer of Arcade. It delivers a good mix of nostalgic action and visual depth, and should keep you interested for a while, although to really squeeze every last drop out of this one, you'll need to step up the difficulty and spend time looking for hidden areas. One of my friends has decided to take it slow, and kill each enemy with each weapon (although I'm still not sure why), and while you may complete the game in shorter order, it's worth the 1200 points to remind you what a great play an old-school platformer can be.