Turtles in Time Re-Shelled on Game and Player 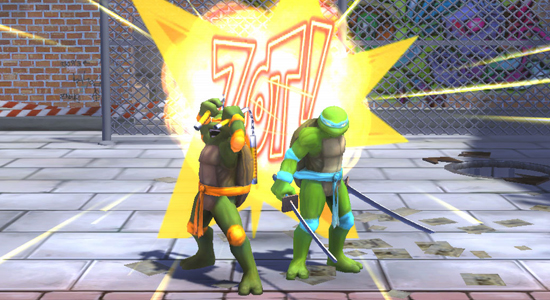 What can you expect from an arcade beat-'em-up rehash?

hen I heard that Turtles in Time was getting a facelift for Xbox Live I almost put my girlfriend's eye out with my nunchucks. Sadly, I'm not talking about the Wii peripheral. One of the greatest beat-'em-ups of the 90s was coming back with online multiplayer support and updated graphics I'll take it!

Well, it turns out that some things were just more fun in my childhood (like chucking indoors), but that doesn't mean that Re-Shelled is an altogether bad buy. A few hundred Gamerpoints and a few hours of fun with friends might well be worth the 800 Microsoft Points price tag. At 1200 — the planned price up until a few weeks ago — it might not have been so worthy of your hard-earned recession-cash. While $10 might not seem like a lot of money, you could use the points to snag another arcade game on the cheap. For younger audiences who don't remember the original Turtles fanfare and aren't sure how to use a Super Nintendo, it's a great opportunity to enjoy a real classic.

Palette-swapped Foot Soldiers
make it feel very much
like the original.

Re-Shelled is a very pretty update on the arcade classic, but anyone expecting more than enhanced graphics will be somewhat disappointed. Not surprisingly, Re-Shelled doesn't offer many new features or game modes, and I'm not sure how it could. The updated stylings remind me of the rebooted cartoon series, which I haven't really seen, but on first thought strike me as a really good thing. The vibrant colors and palette-swapped Foot Soldiers make it feel very much like the original, and playing it on a nice, big LCD television beats the heck out of my old television in the nerd den. Admittedly, I didn't play a lot of Turtles in Time in arcades. They just didn't exist where I'm from.

For that matter, I didn't own a multitap. I still don't, but good news! You don't need one, since Re-Shelled adds online multiplayer. That's sort of like the ultimate multitap. Let's call it the "ultitap." Using ultitap is easy, but I've had some difficulty joining Xbox Live matches. I'm not sure whose end the issue is on, but it's annoying all the same. Connection issues, and the fact that my friends and I seem to have differing play schedules, mean I've found that it's much easier to entice someone to my house with the promise of cake and beer and get them to play locally.

If you've played a beat-'em-up, especially the Turtle ones, you'll be instantly familiar with what's going on here. Slash and stab with your primary attack and use your secondary attack to gain ground between you and your opponents, or to make some breathing room.

Like the original, you can still jump-attack through most levels and bosses. Donatello has the longest weapon range of any Turtle, and is perfect for this tactic. Tackling each level with friends is a lot of fun, and shouldn't be understated. There's something that's still addictive about the beat-'em-up formula, which is evident from its modest return over the past few years. Take that formula, add some friends, and you're guaranteed a good time.

There are some fun achievements to get, but nothing super fantastic. A survival mode, also available for play over Live, tests your skills by allowing only one life for the duration of the game. It's a neat concept, but not something I'm willing to try more than a few times. Even though Re-Shelled has a fair amount of levels, you'll probably make quick work of them.

But what can you expect from a classic arcade beat-'em-up rehash? Re-Shelled still delivers youthful nostalgia and a pretty slick new shell, which makes for a worthwhile buy and a few extra Gamerpoints. I would have been hesitant to include it in the Summer of Arcade, but for fans of the series it's a welcomed addition.