Lionheart: Legacy of the Crusader on Game and Player 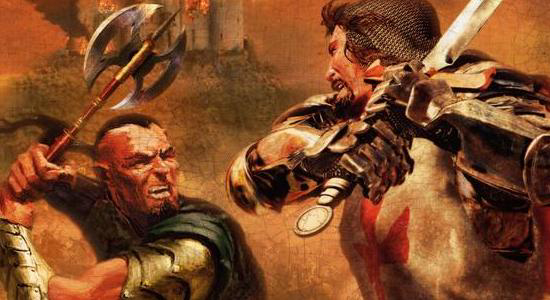 Out with a whimper?

ionheart: Legacy of the Crusader, released in 2003, was the final PC game by Black Isle Studios, although the game was developed mostly by Reflexive Entertainment and Black Isle only assisted with it. The game's main connection to Black Isle was the SPECIAL system that had been developed for the Fallout series. 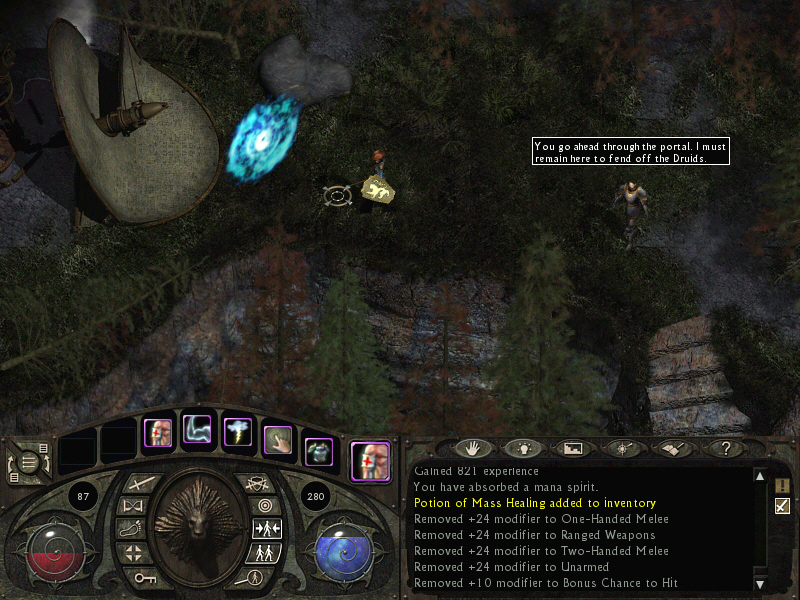 The GUI: effective. Also,
one-third of the screen.

Lionheart is an alternate-reality RPG that tells the story of a descendant of Richard the Lionhearted. During the Third Crusade, a villain used Richard's massacre of over 3,000 people to perform a ritual that would rip apart reality, but the dimensional rift only partially opened. This rift caused magic to enter the world, fueled by spiritual energy under 3 concentrations (demonic, elemental, and bestial). Now the villain wants to finish what he started and you have to find and stop him.

Character creation is much like the Fallout games because of the SPECIAL system. The main differences in Lionheart are choosing a race and "Spiritkind." If you choose a race other than human, you have to pick a racial trait, which is akin to an extra perk. Because the other races are not of pure blood, many people in the world react negatively to them. The "Spiritkind" you choose determines which tree of magic you are most proficient with. Like Fallout, you also get three tag skills and a perk.

As far as computer RPGs go, the bar had been set at this time by incredible games such as Baldur's Gate II and Morrowind, so this title had a lot to live up to. Sadly, it fell short. Although the music and artwork are good and the voice acting is well-done, most other details of the game are weak. The plot is so thin and only held together by a handful of main quests that you can hardly tell it even exists. The writing is cliché, not the quality you would expect from a Black Isle title. The GUI works well, but it takes up an entire third of the screen.

List of complaints aside, the historical alternate reality setting of the game certainly is interesting. You meet a cast of characters from the past, such as Leonardo da Vinci, who aids you in escaping slavers at the beginning of the game. You also meet Shakespeare, Jeanne D'Arc, Guy Fawkes, Machiavelli, Cortes, and Galileo. The dimensional rift must have caused a rift in time, because several of the characters lived during different time periods! Some of the historical figures even join you for a short time, usually until the end of the quest they require help with. You find other companions along the way, including a bear, a knight of Saladin, members of the Inquisition, and a chicken. There's also a bit of humor in the game, such as Marco Polo's spirit joining you in the form of a pair of boots and Leonardo da Vinci's steam engine complaining when you play the piano in his workshop. 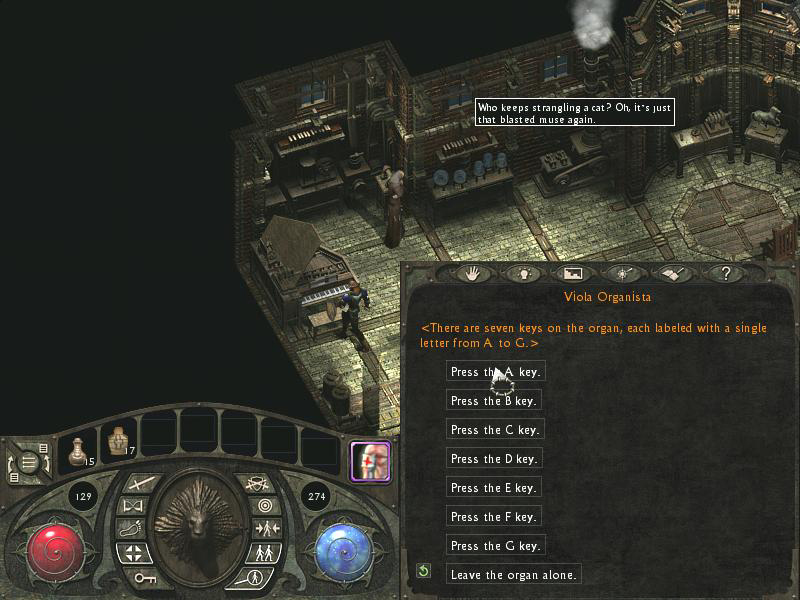 Har-har: Lionheart does
provide a lot of laughs.Once the game gets going, you have to find a faction to join in Barcelona. Although the faction you join has no real affect on the overall story, each has a different set of bonuses you acquire through joining. Optionally, you can gain the favor of the Knights of Saladin in addition to whichever faction you choose. After you finish a set of quests for whichever faction you choose and become and official member (unfortunately, you do not get a jacket) you really start in on the main quest for the game. Your travels take you to France, England, and the Persian desert.

Lionheart: Legacy of the Crusader isn't a terrible game, and is certainly a decent RPG to play if you have nothing better to do, but I wouldn't go out of my way to obtain it. This game will not be a computer RPG remembered in the gamers' history books.