Planescape: Torment on Game and Player 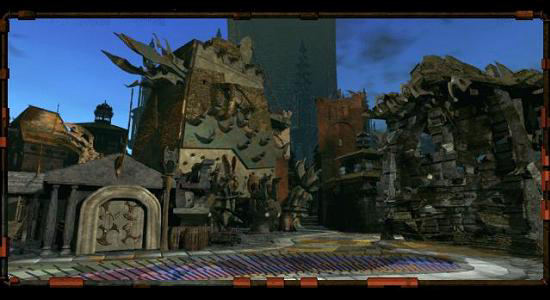 Stranger things have happened in Sigil, the City of Doors.

aking up on a cold, hard table in the Mortuary isn't the most pleasant way to start your day, especially when you can't even remember who you are or how you got there. You're in the mortuary so you must be dead, but something is keeping you alive. And if that wasn't enough to take in for one day, the next thing you know you're chatting with a floating skull named Morte.

Stranger things have happened in Sigil, the City of Doors. The nickname speaks of portals, gateways into other places, planes, and dimensions, rather than physical doors. You never know where you'll end up. You could walk into an alleyway and end up swimming in the river Styx . . . but only if you have the right "key." 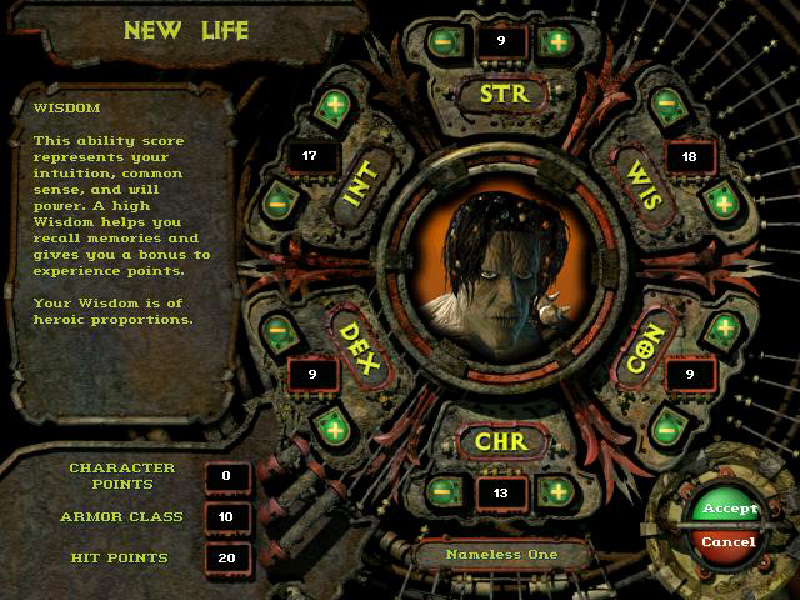 Planescape: Torment is the story of The Nameless One, a man who awakes with no memories of who he is. There are instructions tattooed on your back to seek out a man named Pharod who may be able to shed some light on your situation. Once free from the mortuary, you are free to roam the streets of The Hive in search of this man. This is just the beginning.

Many good things can be said about Torment. It is an immense game with so much to do, you probably wouldn't get to it all in one playthrough. Your stats carry a heavy influence on the situations you get into, the rewards you receive, and how well you can handle things. Unlike many western RPGs, you are not allowed to create your hero; rather, you have the ability to modify his stats at the beginning of the game.

You start as a fighter, but are later able to change your class to either a thief or mage. Even as a fighter, the most important stat in the game is arguably wisdom. Not only does a high wisdom give you a bonus in experience, it also aids in The Nameless One recovering his memories which yields extra experience, and it opens up new dialog options that can assist you in talking your way out of otherwise dangerous situations. High intelligence helps you learn things and decipher puzzles and high charisma gets you better rewards from quests. Each level you gain allots you one point in a statistic of your choice, so you can easily raise your lower stats or build upon your higher stats to epic levels.

Dialog and interaction with other characters play the most important role in this game. The script of Torment could easily fill a full-length novel, if not three. It's easy to skip over dialog in RPGs just to get to the quest, but it's very unwise to do so in this game. Your alignment shifts with dialog choices and you could easily find yourself evil and chaotic and quite disliked by many people. The dialog is well-written throughout the game. It brings life to the dreary, dusty streets of Sigil.

All of the NPCs who can join your party are tied to The Nameless One in some way. He has no recollection of who they are, but through clues in dialog and from speaking directly with them, he learns more about them and how he knew them in his past.

There are very few negative things to be said about this game aesthetically. For its time, the graphics were well done and fit the mood of the world quite well. The character design is unique. The only drawbacks are the amount of recycled graphics for generic dwellings and that some unique items use the same icon as their standard counterpart. 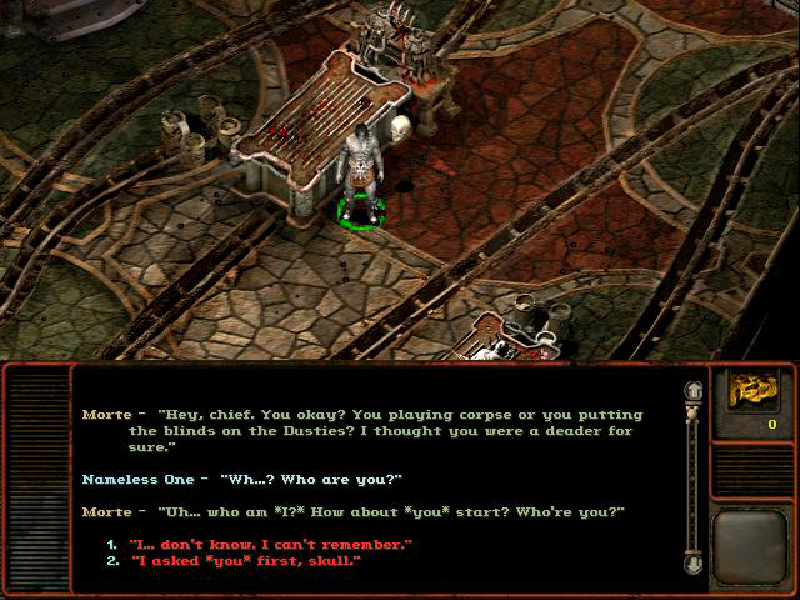 Your alignment shifts
with dialog choices.Mechanically the game functions well for the most part. Oftentimes the pathfinding leaves a little to be desired. Your party will often get stuck in corners trying to find the "best path" to a chosen destination on the map, especially when there is an unseen obstacle like a closed door hindering the correct path. Also, during combat, characters will often get stuck on each other trying to get to the enemy instead of just walking around them. The game also has a few bugs: some of the more diabolical ones were fixed with the official patch, but many were left in. Most are minor annoyances. Another pet peeve with this game is there are no installation options, which forces disc-swapping. This can get very tedious in some areas of the game where adjacent maps are stored on separate discs and you have to swap them out every 15 minutes or so.

Planescape: Torment is an underground favorite of many computer RPG fans. It is one of my personal favorites. The good things about the game certainly outweigh all the minor flaws. It may not be the roleplaying experience everyone is looking for, but for those interested in a good, story-driven game with many puzzles and challenges that make you think, it's nearly perfect.