iFighter on Game and Player 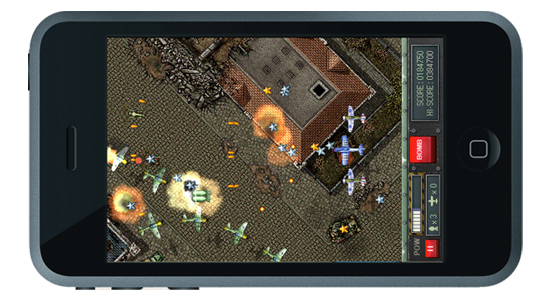 You needn't read any further; just buy it.

Something you don't see very often on the iPhone is a complete experience. The lion's share of games are ninety-nine cents or less, making this an explainable short-coming. iFighter Lite was released some time ago as a free demonstration of how Epic Force was preparing to raise the bar to an incredible level. Well, the full version is here now, and it is simply incredible.

iFighter is a top-down World War II shooter, similar to the classic NES game, 1942. The graphical quality is on par with something you might find on the Super Nintendo. Not exactly a mind-blowing scenario, I know. Furthermore, the included four levels leave much to desire. The ninety-nine-cent price makes this shortcoming forgivable. Surely, there will be level packs released once Epic Force receives their due. 1.7 million downloads of the Lite version gives an idea of the well deserved paycheck coming to the studio.

Top to bottom, the package is complete. Every detail of the control scheme is customizable, offering three options for movement, finger swipes, motion control and "Joypad" which simulates a classic arcade stick with the touchscreen. This joypad functions as well, if not better than the analog nub on the PSP. This functionality has huge implications for the iPhone as a hand-held gaming device, quite possibly beating a path for twin stick simulation. Motion control works well and offers a very natural feel, while finger swiping does not seem responsive enough for the twitch movements required to avoid enemy fire. Intuitively, an auto-fire option simplifies the game for those not interested in holding a finger on the playing screen at all times.

Standard fare for any shooter, upgrades and power-ups are included. Each level offers varied enemy types and tactics coupled with an intense boss battle at the end of battle. An impending classical score gives weight to an otherwise lacking story. An often overlooked feature, custom music may be played if the soundtrack is not up your alley.

An enjoyable download, iFighter is worth its virtually non-existent introductory price. Amongst a sea of applications willing to take your money, this title rises to the top while moving the iPhone, as a gaming platform, forward by leaps and bound.