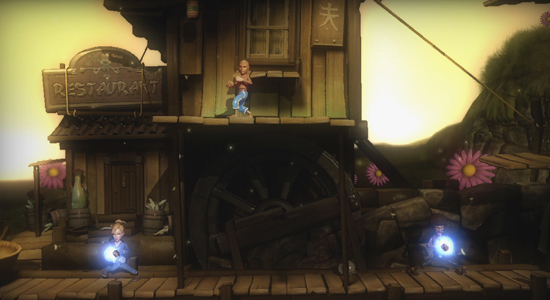 outh Eastern Texas, 1983 — Cobra Commander versus Man-at-Arms of He-Man fame. In the lush, green fields just outside of Castle Greyskull, only one man could survive. It was brutal and seemed as if it would never end. Not even a mandated-by-Mom, mid-death-duel lunch break could temper the ferocity. At battle's end, Man-at-Arms stood victorious. Thanks to the hot, Texas sun and the help of a magnifying glass, Cobra Commander would never fight again. From the beginning, busted spring in his left arm socket, the Commander's fate was inevitable.

The characters may have changed, the setting different for us all. Invariably, we've all played it. To play Rag Doll Kung Fu: Fists of Plastic is to feel as though you are pulling the strings of a marionette. Which is my only logical explanation for this comparison. Of course, the imagination of a 5-year-old boy allows for a much wider range of maneuvers.

It's all brought to life from the dreams of Lionhead Studio's artist Mark Healey. After creating a low budget kung-fu movie with his friends, Healey envisioned what has become Rag Doll Kung Fu. Healey handed this project off to Swedish developer, Tarsier Studios. Fists of Plastic amounts to a concoction: three parts LittleBigPlanet; one part Super Smash Brothers; served up in a nostalgic, frosty mug. This is a physics-heavy, four-player brawl featuring characters meant to resemble action figures, complete with a menacing growl and the kung-fu grip.

The first iteration of Rag Doll Kung Fu was made available in 2005 on PC. Advertised as a Kung Fu movie creator, it was the first independent release available for download from Steam. With an incredibly involved mouse and keyboard control, every detail of movement was controlled by the player. Fists of Plastic — a much different game — features a friendlier control scheme and the focus of a fighting title.

Without online support, it feels unfinished. Besides the tutorial, only a short list of challenges adds depth to the game. Still, this limited scope does not keep the title from showing flashes of brilliance. In particular, the gymnastics challenge is proof of concept for its own stand-alone platforming title. Its exaggerated-yet-fluid mechanics are boundlessly enjoyable.

Fists of Plastic allows for pickup and play with relative ease, while mastery of the move-set and physics leave you feeling in complete control. Motion-controlled super-moves add an interesting layer to the mix. Every attack and block must be aimed, making certain combinations very difficult. Volleying your opponent creates combos that multiply damage done.

Power-ups and weapon spawns
keep the fights interesting.Completely dependent on your opponent staying airborne, these tactics can only be executed consistently after much practice. Power-ups and weapon spawns keep the fights interesting. But even the weapons fall victim to realistic gravity, creating a slight learning curve in order to implement effective use. The comical mechanics of nun-chucks leave their presence on the battlefield unmistakably obvious. The drawback is that all characters use the same move-set. There is no distinction between your character choice beyond the superficial.

Lack of online play feels almost criminal. The developers are completely aware but due to "limitations" it was not included. Regardless of the excuse, it is a major detractor. How Tarsier earns my $9.99 without complaint is on concept alone. I prefer to look at my purchase as an investment in the future of this franchise. Fists of Plastic's use of the Havok engine is done beautifully, taking fighting games in an original direction. It's a mish-mash of ideas strung together in what feels like a test. A test they have passed; I'd gladly part with another $9.99 to take this to the online arena. Another bill would be well deserved for a gymnastics expansion. Perhaps it's the new direction brought on by a poor economy. If you can buy into this theory, your money is very well spent. If you expect completion and depth with every purchase no matter the price, you may find this title lacking on both fronts.