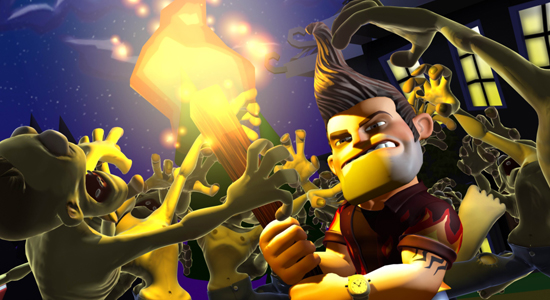 n March Twenty-Sixth, the British development team at Doublesix Games released this arcade-style shooter to the PlayStation Network. Highly anticipated amongst PlayStation Network fanatics, Burn Zombie Burn has been touted as the (next) savior of the PSN by some. The Official PlayStation 3 Magazine has even gone so far as to claim "Burn Zombie Burn is going to break download records when it is released," a claim Doublesix has not been afraid to highlight on the game's website.

You may slay thousands of
hilariously animated abominations.

With such high expectations, one's inclination is to envision an incomparable digital-download experience. Unfortunately, dreams are just that: dreams. While it is easy to juxtapose Burn Zombie Burn with the likes of any twin-stick shooter, it does possess enough individuality to make that an careless comparison. The actual mechanics of its gameplay are similar to, for instance, Geometry Wars. An effortless argument would be that it simply does not use both analog sticks. To delve deeper into the differences, I'd note the more complex weapon system. Strategizing, along with proper weapon selection is key to getting higher scores. This title maintains enough simplicity to make visceral play very enjoyable.

While proper use of weaponry is paramount, a lock-on button takes the guesswork out of the equation. This feature, which continuously re-targets the closest enemy, seems necessary for slaying the incomprehensible number of zombies that are thrown your way. We aren't dealing with Resident Evil here. In a matter of 15 minutes, you may slay thousands of these hilariously animated abominations. With an assortment of power-ups to help you in your crusade, what seems impossible is made — otherwise.

Best described as a top-down shooter, Burn Zombie Burn is done in the fashion of a rather shallow zombie horror flick. So shallow that references to a movie called Diarrhea of the Dead and the main character Bruce — equipped with a never-ending supply of pistol ammunition, Brylcream and one-liners — are the only elements worthy of mention. After all, "Shooting zombies and chewing bubble gum" leaves nothing left to desire. While I say that in jest, it rings quite true from my perspective. Any sort of additional story would feel tacked on or trite.

Zombies? Sturgis can wait.Bruce, a rather animated fellow, brings to mind how Jay Leno might appear while on vacation. Greasy hair, five o'clock shadow and an attitude that says "If it wasn't for these damned zombies, I'd be half way to Sturgis by now." Daisy, his love interest and partner in zombie mayhem, is highlighted in only one fashion, the "Defend Daisy" mode. She sits idly by, chewing bubble gum as you heroically defend her honor and health bar. Other modes include the self-explanatory, "Free Play" and "Timed" modes. Along with a plethora of challenges, there is enough depth here to keep anyone busy for many hours — an amount worth much more than the $9.99 price tag would lead you to believe.

What you have here is a complete single-player experience. Giving a poor mark to the game is difficult, as it does what it intends very well. It's hard not to feel as though the developer missed the mark after giving the game a fair amount of play. Split-screen play, as is, limits the game inordinately. And it feels as though versatile online multiplayer support was meant to be included. Had it been, we might have the No. 1 downloadable game for any console. The prospect of online support via paid content release seems likely. Its exclusion at release however, keeps Burn Zombie Burn from being a true gem.