Faceez on Game and Player 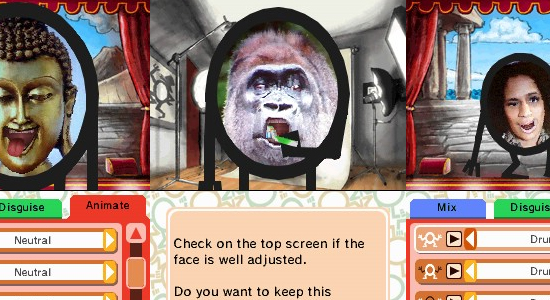 You deserve a silly picture of yourself.

aceez is a fun photo manipulation game for the DSi. It allows you to take photographs of yourself and others, manipulate them in fun and amusing ways and, with the DSi's ability to connect to Facebook, share them with friends.

The game begins by letting you choose between the two DSi cameras available to position your face in the frame provided. It is important to align the eyes and mouth as accurately to the frame as possible in order to animate them later in various emotional states.

Once this is done, your picture is stored and can be used repeatedly, and shows up within an egg-like body with moving arms and legs. There are three simple tabs to choose from: "mix," "disguise," and "animate." The "mix" section allows you to choose specific sections of various photographs and layer them into one face. 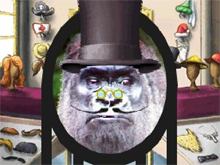 Dress up your creation with hats, noses, sunglasses, moustaches.

"Disguise" is the really fun part; dressing up your creation with hats, noses, sunglasses, moustaches, and makeup. However, as the choices may well be varied often, the hat and makeup features didn't fit the image correctly no matter how perfect I thought your alignment was in the initial photograph.

The "animate" feature, which is the most interesting tab of the three, allows you to manipulate your whole body. Scrolling through the touch screen can change the movement of arms, legs, eyes, mouth and the structure of your body. It provides the player which more than just the basic emotions you'd expect: happy, sad, mad, and so forth. The body can be posed in various moving and non-moving positions such as boxing, running and even cart-wheeling.

A feature I really enjoyed was the random button, which was great when I felt that I was choosing the same disguises over and over again; getting me to move away from the cowboys, cyborgs, and princesses, and shaking things up a bit. That said, the "mix" ability did have one particular downfall; which was that is was more limited than actually being visually interesting.

On the surface of it, Faceez seems to be a game geared towards the younger generation of gamers. However, as I discovered, for a mere 200 points it can be a welcome respite between more serious games for the older DSi user as well.

I want to see gorillas do cartwheels!!