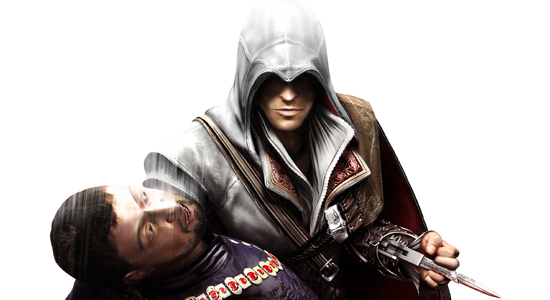 For those who game for the experience.

he concept of media as a means of escapism has always held sway over my choices in what I read, what I watch, and what I play. Regardless of the form it takes, each title I pick up is more often than not chosen for its capacity for existential transportation. Being placed in the body of a hero in a world beyond my own, and allowed to participate in epic endeavors, is something I will always agree to.

The same cannot be said for Desmond Miles, the protagonist of Ubisoft's outstanding Assassin's Creed series. Plucked from his quiet life as a bartender and held captive by the Abstergo Corporation, Desmond is forced to relive the exploits of his genetic ancestors, assassins all, who had devoted their lives to the opposition of the Templar society and that society's ultimate goal of global domination. Through the Animus, a machine designed to read and display the genetic memory encoded in his DNA, Desmond slowly comes to understand the epic, age-old struggle between two clandestine forces for the fate of the world and the part that he must play in deciding that fate. In Assassin's Creed 2, players follow Desmond's development from puppet to puppeteer.

The original game followed the movements of Altair, a founding member of the Order of Assassins in Israel during the Third Crusade. Initially a narrow-minded lackey of the Order, devoid of caution or compassion, Altair kills with singular abandon. Following a botched assassination attempt he learns of the existence of the Templar Society, a shadowy group of powerful men intent on altering the course of history in their favor through lies and subversion. Gradually, Altair learns to question and eventually reject what he has been raised to believe, reforming the Order and dedicating it to the protection of the truth and the elimination of those who seek to distort it.

The second game focuses on Ezio Auditore, a young nobleman from a wealthy 15th century Italian family with no interests other than causing trouble and enjoying life. His life and worldview are shattered when his family is betrayed and destroyed by trusted friends. Taken in by an uncle, he is inducted into the way of the assassin and shown the true extent of the treachery committed by the Templars. Meanwhile, in the 21st century, Desmond begins to piece together the entire picture, aided by memories from both Altair and Ezio, and his new allies in the modern Order of Assassins. Both storylines develop simultaneously and lead to the same conclusion as the game winds down and prepares to segue into the third installment.

As the second in the series, Assassin's Creed 2 inherited all of the best traits from the original game. Solid platforming gameplay mechanics, coupled with a versatile combat system founded on a unique premise of striking targets from the shadows and set in highly detailed recreations of authentic historical sites populated with authentic historical figures combine to make for some of the most compelling game environments to date. Fifteenth century Italy looks incredible as rendered by the Anvil engine. The classic architecture is painstakingly recreated and blends flawlessly together, flowing out in all directions as Ezio traverses the rooftops and alleyways of Florence, Venice, and even Vatican City.

It inherited all of the best traits from the original game.The free-running system originated by the series serves as the perfect vehicle for exploring each location as every niche and corner can be reached and every vista appreciated. Handling while free-running feels very smooth, though I found it to be occasionally oversensitive at times. Too, the following camera would have benefited from snappier response and the option to zoom back a bit when running to provide time to react to upcoming obstacles and dropoffs. Chasing thieves and couriers across the skyline often saw Ezio leap suicidally from a roof while the quarry took advantage of lower platforms I couldn't see. These setbacks aside, the feeling of flying effortlessly between buildings and leaping gracefully from the scattered viewpoints never gets old.

Combat in the game takes place under two circumstances: stealth assassinations or open conflict. Stealth assassinations are elegantly simple and easily done. The game's signature hidden blades have been made much more versatile and can now be used from the above and below targets as well as on two targets at once. A personal favorite involves striking from concealment within piles of hay. Upgrades found in Altair's personal notes make Ezio's capabilities increasingly dynamic allowing for greater diversity in target elimination. As the focus of Assassin's Creed gameplay, these instances are always satisfying.

Open conflict is much more frustrating in the second installment, thanks to the addition of new enemy archetypes and heightened combat complexity. The counterkill system from the original game allowed Altair to easily dispatch scores of enemies in succession simply by being patient. While this allowed the player to feel supremely confident in his position as a hardened killer, it effectively made combat weak and repetitive. The new system no longer allows Ezio to wait for the easy kill. Enemies are much more capable of deflecting attacks, will attack en masse, and require different strategies to defeat. All of this makes combat more challenging, and ultimately more appropriate. Open combat has effectively become the punishment for allowing the guards to catch up with you, something a good assassin would never do.

The role played by the youthfully exuberant Leonardo da Vinci was a particular pleasure. Fortunately, Ezio benefits from a much more versatile blending and cover system than was available to Altair. Blending can now be performed by merging with any group of four or more people, rather than the designated groups of the first game. Additionally, new types of allies can be accessed and serve slightly different functions while achieving the same effect. Throngs of courtesan women can be hired to surround Ezio as he walks, creating a moving blending system, as well as being dispatched to lure guards away from strategic locations. Thieves can follow Ezio across rooftops and assist in the eliminations of archers. Mercenaries can be paid to cause disturbances also allowing Ezio to slip by unnoticed. All of these options serve to keep gameplay varied and fun.

Of all the innovations and care that Ubisoft put into the game, the finest touches occur in the development of the story. While the first game barely hinted at the depths of intricacy involved in the Templar plot, the newest installment plumbs those depths. Dozens of the most important and outstanding figures in history are linked to both sides of the conflict with great effect. The story of Subject 16, the man who preceded Desmond as Abstergo's marionette, is revealed through clues left behind by him and unlocked in a series of clever and engaging puzzles. The pacing of the plot is left up to the player, allowing each of the story-based missions to be done immediately following the last. Character development and dialogue are excellent, and with a single exception (I'm looking at you, Mario) highly enjoyable. The role played by the youthfully exuberant Leonardo da Vinci was a particular pleasure.

Assassin's Creed 2 is, in every way, a refinement on the original game. Engaging and exciting, it affords the player quite a fascinating ride and tells a story unlike any other. For those who game for the experience, this is an easy choice.