Metroid Prime on Game and Player 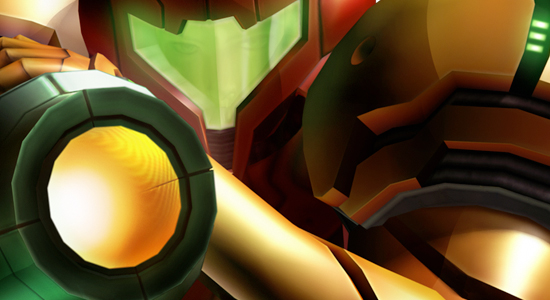 Elevation to an art form.

hen Metroid first arrived for the Nintendo back in 1987, the game broke new ground across many fronts. With its theme of exploration, permanent ability upgrades, progressive problem-solving, multiple available endings, and a silently compelling protagonist with a twist, Metroid made waves in the game community.

As new platforms became available, each offered their own expansion to the story of the bounty hunter Samus Aran, building on the lore while staying true to the original formula that made her an icon. With the arrival of the GameCube, Shigeru Miyamoto and company seized on the opportunity to revamp the franchise and bring it into the three-dimensional realm of the first-person shooter. The resulting product, Metroid Prime, elevated the series into a true art form and provided millions of gamers the exciting chance to walk a while in the suit of a legend.

The Hunter in the Suit:
sleek, lovely, deadly.

The stage is set with the simplest of premises: Samus has received a distress signal from a lone frigate in decaying planetary orbit. Obeying the inquisitive impulse and being fearlessly willing to discover, Samus guides her gunship into a close hover and emerges, leaping gracefully onto the landing pad and surveying her surroundings. This brief scene offers the first glimpse into the delicate balance of character Miyamoto strikes between mystery and approachability.

All one sees at first glance is the Suit, sleek and deadly with its aggressive lines and distinctive pauldrons and cannon. The Suit reveals nothing about the person inside, a trait favored by another legendary bounty hunter, Boba Fett. The sole exception between Fett and Aran, however, is also one of the most delicate and subtle touches in the game; whereas Fett's helmet conceals all, Samus' translucent visor allows the player to see into her eyes and to a great extent, her soul. 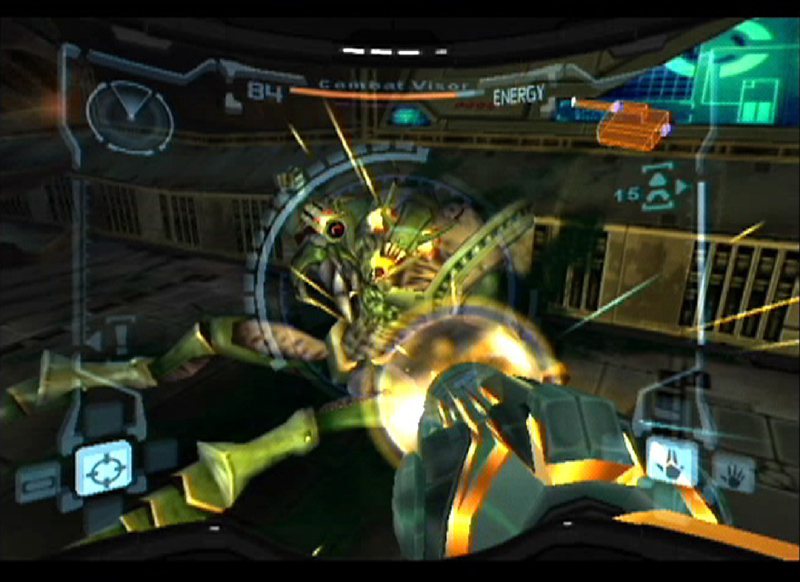 Each enemy has
a weakness to exploit.Here we find not a hardened mercenary warrior, but a capable and curious traveler, eyes bright with the wonder of the impending discovery. These eyes are all the player will ever see of Samus, in cutscenes and in the occasional reflection of light on the visor in the thick of combat, but with those fleeting moments the player is provided a very tangible connection with the heroine that serves to quickly immerse them into the game. With the hook firmly set, Samus, and the player, venture forth into a quickly compounding situation.

The scenario aboard the frigate offers up a chance to adjust to the controls and abilities Samus' suit provides. Utilizing the scan mode of her visor, the Hunter begins to survey the devastation aboard the ship, and reconstruct the events preceding her arrival. The world she finds herself in is rendered simply and cleanly. The GameCube and Wii have never held the top honors in graphical might, but the developers at Retro Studios did an excellent job of creating art within their limitations.

Creatures are defined and distinctive, and the environments have a simple beauty to them, from the snow and ice flows of Phendrana, to the stark interiors of the Space Pirate facilities. The crown jewel of all of this is the Hunter herself. The glossy finish of her armor and strikingly distinctive look are beautifully done, both in-play and in the bonus art unlocked throughout the game.

The first-person controls are simply arranged and quite easy to master. While the default view is fixed to the horizon, both jumping and maneuvering are very fluid and neither suffers from the omission of freelook. Each of the gamepad's shoulder buttons serve to add an additional element of aiming and targeting, with the left allowing for individual target lock and strafing, and the right engaging the fre- aim mode, rooting Samus to the spot and enabling her to draw a careful bead on her target. The free-aim mode features another of the artful touches of character that Miyamoto does so well: as Aran lines up her shot, her left hand can be seen supporting and steadying the barrel of the massive cannon. Small inclusions such as this serve to transform a generic protagonist into a genuine entity and as such go a long way towards creating a truly engaging experience.

Throughout the game, combat flows well, and the variety of enemies faced is wide, each sporting a weakness to be exploited by Samus' ever-expanding arsenal. Just as the environment must be overcome through new gadgets and tools, so must the enemies and bosses be addressed. Each boss battle offers new challenges requiring unique tactics and though these tactics are often painfully obvious (having been typically designed around the same new piece of technology that allowed access to the boss in the first place) they certainly serve to create memorable encounters. 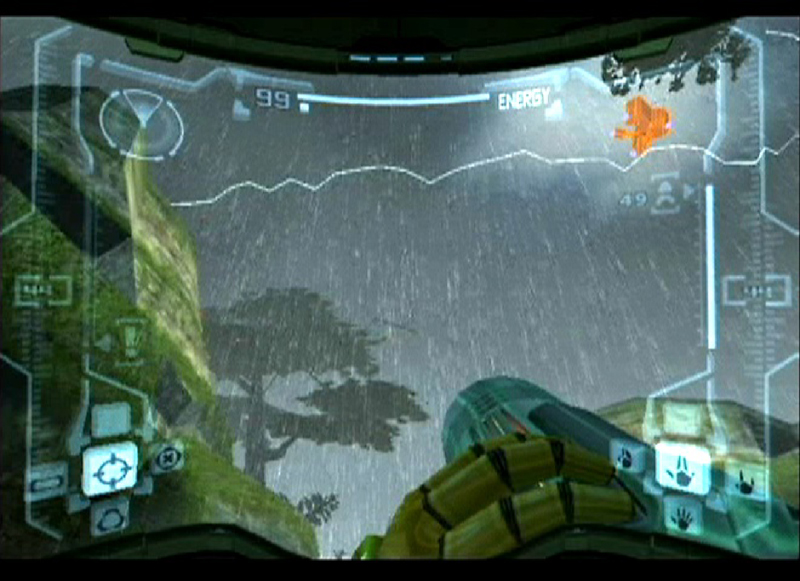 Little touches: as Aran lines
up her shot, she steadies the
barrel of the massive cannon.Aboard the frigate, the situation rapidly deteriorates, and following the game's first boss and a debilitating explosion, the bounty hunter makes good her escape and proceeds to the surface of the planet where the game begins in earnest.

From the moment they touch down players are presented with a variety of exploration options. Also immediately apparent is the fact that some of those options are inaccessible. In fact, everywhere the player ventures they'll find routes initially closed to them, tantalizing paths untraversable without the necessary suit upgrade.

This, of course, is the hallmark of the Metroid series: trial and error exploration of multi-layered environments with frequent backtracking. While the main path is clearly dependent on each suit upgrade found in the game, there also exist many other instances where the sharp-eyed gamer uses those abilities to access hidden niches and pockets where bonus upgrades may be found. These items, as well as hidden information serving to round out the storyline and reveal more about Samus' history, reward the observant among us, gamers whos drive to explore matches that of their in-game counterpart. In this way, Prime proves itself to be a very worthy successor to the spirit of the series.

Even today, in a world where first-person shooters have been honed and tuned into near perfection, Metroid Prime holds a strong appeal as a unique experience with tons to offer. Three years after I originally played it, I still found myself swept up into the thrill of discovery and anticipation, despite the relative age of the game. I would strongly recommend it to anyone with a 'Cube or a Wii. Check it out. You'll be glad you did.